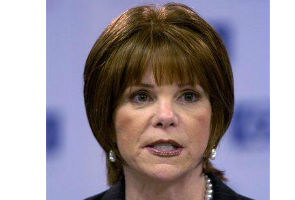 Highlights
Patricia Dunn, the former Hewlett-Packard Co. chairwoman who authorized a boardroom surveillance probe that ultimately sullied her remarkable rise from investment bank typist to the corporate upper class, has died after a long bout with cancer. She was 58.

Dunn died Sunday morning at her home in Orinda surrounded by her family, according to her sister, Debbie Lammers. She said Dunn's ovarian cancer had returned.

Once one of the most powerful women in corporate America, Dunn saw her career tarnished in 2006 when she was ousted from HP and brought up on criminal charges - which were ultimately dropped - for approving the company's plan to snoop into the private phone records of board members, journalists and HP employees to catch people leaking to the media.

Dunn long maintained that she was a scapegoat. She said she was being unfairly vilified for the tactics of third-party investigators she did not hire or directly control. She emphasized that she didn't know the inner workings of the investigations and that she relied on HP's security and legal teams for assurance that the tactics were legal.

The scandal unfolded as Dunn continued to battle a disease that had haunted her through a sparkling investment banking career and a stormy nine-year stretch on the board of HP, one of the world's largest technology companies.

Dunn had spent time on philanthropic matters in the years since the scandal, Lammers said.

Dunn and her husband, Bill Jahnke, endowed a faculty position at the University of California, San Francisco's Department of Surgery named in honor of her mother, who also died of cancer.

Lammers said she wanted people to remember her sister's "incredibly influential rise in her professional life and her courage and valiant battles over the course of her treatments."
"Her example of leadership, courage and poise throughout her professional and personal life was exemplary," Lammers told The Associated Press on Monday.

Dunn's time at HP coincided with some of the most contentious and challenging periods since the Palo Alto-based company was founded in 1939.

Dunn joined HP's board in 1998 and was instrumental in the hiring and firing of CEO Carly Fiorina, whose flamboyant personality and ferocity in securing the $19 billion purchase of Compaq Computer Corp. ultimately helped hasten her ouster amid a sagging stock price and disappointing results from the combined company.

Dunn was the one who announced Fiorina's ouster in February 2005 and named her low-key successor, Mark Hurd, previously CEO of NCR Corp. Hurd himself was ousted last year after an investigation into a sexual harassment claim found inconsistencies in expense reports filed.

Dunn also assumed Fiorina's role as chairwoman at the time. Dunn was forced out in that role in September 2006 in an embarrassing scandal involving spying on the telephone records of board members and journalists to ferret out the source of leaks to the media.

Just a month later, California's attorney general charged Dunn and four others with four felony counts each - conspiracy, fraud, identity theft and illegally using computer data - for their roles in the probe. That came just two days before she started chemotherapy treatments for advanced ovarian cancer.

The criminal charges against Dunn were eventually dropped, as prosecutors said she had little involvement in the actual "pretexting" - the ruse used by investigators to view private telephone records by pretending to be someone else - and because of her ailing health.

Charges against the other defendants were also dropped, with a Santa Clara County Superior Court judge calling their conduct "a betrayal of trust and honor" at worst that was not criminal behavior at the time it occurred.

Once an aspiring investigative reporter, Dunn, a graduate of the University of California, Berkeley, found more immediate and lucrative work in the financial world and made her mark in investment banking.

After working briefly as a part-time reporter for a community newspaper in San Francisco, Dunn began her corporate climb by capitalizing on a temporary typist gig that she landed at an investment firm in the 1970s.

She was able to turn the two-week typing assignment into full-time work and managed to quickly rise through the ranks by earning a reputation as a hard-edged businesswoman. That reputation eventually helped her earn the promotion to CEO of fund management behemoth Barclays Global Investors in 1995.

Dunn's life had been far from charmed.

Financial difficulties dogged her family throughout her childhood, and her father, a vaudeville actor, died of a heart attack before she was a teen. After the death, the family moved to Marin County, north of San Francisco, and her mother's emotional health deteriorated.

It was at the height of Dunn's corporate success when she was diagnosed with cancer herself, forcing her to step down in 2002 from her role as Barclays CEO to fight breast cancer and melanoma.

Two years later, she was diagnosed with ovarian cancer, and in fall 2006, she underwent surgery for a metastasized tumor - three weeks before the public learned of the HP investigation that spawned congressional investigations, criminal probes and forced Dunn's resignation.

As Dunn and others involved in the probe grappled with the fallout, the public was given a rare view of the workings of a board consumed with bitter rivalries and dysfunction.

The probe Dunn authorized ultimately identified renowned physicist and former presidential adviser George Keyworth as the director who spoke anonymously to a technology news website about a confidential board retreat. Some viewed the article as innocuous. Venture capitalist Tom Perkins resigned from the board in protest over the investigators' tactics.

Dunn's family is planning a memorial service in San Francisco.