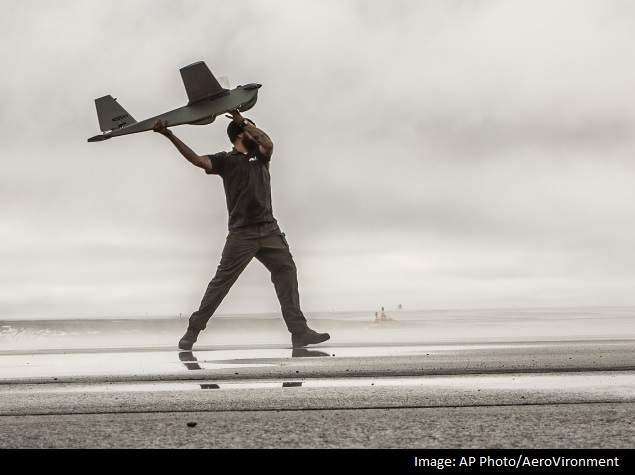 The Federal Aviation Administration said Tuesday it has granted the first permission for commercial drone flights over land, the latest effort by the agency to show it is loosening restrictions on commercial uses of the unmanned aircraft.

Drone maker AeroVironment of Monrovia, California, and BP energy corporation have been given permission to use a Puma drone to survey pipelines, roads and equipment at Prudhoe Bay in Alaska, the agency said. The first flight took place on Sunday.

Made by AeroVironment, the Puma is a small, hand-launched craft about 4 1/2 feet long and with a 9-foot wingspan. It was initially designed for military use.

Drones are often less expensive to operate than manned aircraft and easier to maneuver. Equipped with 3D cameras, the Puma will provide images of hard-to-reach places not currently available, BP and AeroVironment say.

Last summer, the FAA had approved the Puma and the ScanEagle made by Boeing subsidiary Insitu Inc. of Bingen, Washington, for flights over the Arctic Ocean to scout icebergs, count whales and monitor drilling platforms.

(Also see: Facebook's Connectivity Lab to use satellites, drones to spread the Internet)

"These surveys on Alaska's North Slope are another important step toward broader commercial use of unmanned aircraft," said Transportation Secretary Anthony Foxx. "The technology is quickly changing, and the opportunities are growing."

Last week, the FAA said it was considering giving permission to seven filmmaking companies to use drones for aerial photography, a potentially significant step that could lead to greater relaxation of the agency's ban on commercial use of drones. So far, the only exceptions to that ban have been limited flights that have been approved over the Arctic Ocean and now Alaska.

Congress directed the FAA to provide commercial drones access to U.S. skies by September 2015, but the agency's efforts to write safety rules for such flights by drones have been slow, and it is not expected to meet the deadline. FAA officials are on their third attempt to draft regulations acceptable to the Transportation Department and the White House.

Regulators have said they expect to propose rules before the end of the year intended to clear the way for flights by drones weighing 55 pounds or less. However, it will take months and perhaps years before such regulations become final.

Much of the commercial demand for unmanned aircraft is for small drones, some of which weigh only a few pounds. The FAA estimates that within five years after regulations are in place there will be about 7,500 commercial drones operating in the U.S.

Ben Gielow, general counsel for the Association for Unmanned Vehicle Systems International, a trade association for the commercial drone industry, said the first approval of commercial flights over land is "an exciting moment," but "we believe more can and must be done to allow for limited operations for small (unmanned aircraft) over land."

FAA Administrator Michael Huerta has said drafting such rules is complex because they must ensure that the large volume and diversity of manned aircraft in U.S. skies are protected. Even a small drone that collides with plane traveling at high speeds or gets chewed up by helicopter rotors could cause a crash.

But as the cost of small drones has come down and their sophistication and usefulness has increased, entrepreneurs and businesses - from real estate agents to wedding video makers - aren't waiting for government permission. Drone industry officials have warned that the longer the FAA takes to write regulations, the more rogue commercial operators will multiply.