Share on Facebook Tweet Snapchat Share Reddit Email Comment
Four men who had each been paralysed from the chest down for more than two years and been told their situation was hopeless regained the ability to voluntarily move their legs and feet - though not to walk - after an electrical device was implanted in their spines, researchers reported on Tuesday.

The success, albeit in a small number of patients, offers hope that a fundamentally new treatment can help many of the 6 million paralysed Americans, including the 1.3 million with spinal cord injuries. Even those whose cases are deemed so hopeless they are not offered further rehabilitation might benefit, scientists say.

The results also cast doubt on a key assumption about spinal cord injury: that treatment requires damaged neurons to regrow or be replaced with, for instance, stem cells. Both approaches have proved fiendishly difficult and, in the case of stem cells, controversial.

"The big message here is that people with spinal cord injury of the type these men had no longer need to think they have a lifelong sentence of paralysis," Dr Roderic Pettigrew, director of the National Institute of Biomedical Imaging and Bioengineering, part of the National Institutes of Health, said in an interview. "They can achieve some level of voluntary function," which he called "a milestone" in spinal cord injury research. His institute partly funded the study, which was published in the journal Brain.

The partial recovery achieved by "hopeless" patients suggests that physicians and rehabilitation therapists may be giving up on millions of paralysed people. That's because physical therapy can mimic some aspects of the electrical stimulation that the device provided, said Susan Harkema, a specialist in neurological rehab at the University of Louisville's Kentucky Spinal Cord Injury Research Center (KSCIRC), who led the new study.

"One of the things this research shows is that there is more potential for spinal cord injury patients to recover even without this electrical stimulation," she said in an interview. "Today, patients are not given rehab because they are not considered 'good investments.' We should rethink what they're offered, because rehabilitation can drive recovery for many more than are receiving it."

Baseball star
The research built on the case of a single paralysed patient that Harkema's team reported in 2011. College baseball star Rob Summers had been injured in a hit-and-run accident in 2006, paralyzing him below the neck.

In late 2009, Summers received the epidural implant just below the damaged area. The 2.5-ounce (72-gram) device began emitting electrical current at varying frequencies and intensities, stimulating dense bundles of neurons in the spinal cord. Three days later he stood on his own. In 2010 he took his first tentative steps.

His partial recovery became a media sensation, but even the Louisville team thought that epidural stimulation could benefit only spinal cord patients who had some sensation in their paralysed limbs, as Summers did. "We assumed that the surviving sensory pathways were crucial for this recovery," Harkema said.

She and her team had little hope for two of their next patients. Neither had sensation in their paralysed legs. 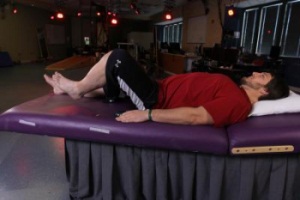 One was Kent Stephenson, who had been paralysed in a 2009 motocross crash when he was 21. After months of rehab in Colorado, "they said I would never move my legs again, and there was no hope," he said.

Eleven days after he began receiving the deck-of-cards-size RestoreAdvanced stimulator, which is made by Medtronic and used for pain control, Stephenson moved his "paralysed" left leg while lying on his back.

"My mom, who was in the room when they turned the stimulator on and told me, 'Pull your left leg up,' cried when I did it," Stephenson said. "I got a little watery-eyed, too. I'd been told I'd never move voluntarily again."

The researchers didn't expect him to, either, said Claudia Angeli of the Frazier Rehab Institute and KSCIRC, who co-led the study: "So when Kent moved, we thought, huh, this might actually be working."

Andrew Meas, whose head-on collision with a car while he was riding home on his motorcycle in 2006 left him paralysed from the chest down, made even more progress. He can move even when the stimulator is not emitting electrical signals.

The first time he was able to move his legs "it made me feel like a normal person again," he said. After months of rehab post-implant, "I can pick up both my legs without the stimulator on, and can also stand without it. My record is 27 minutes, and I'm still progressing."

At first, Meas could move his legs only when the implant's 16 electrodes were zapping their spinal neurons at full power. Over 28 weeks of daily physical therapy, he gradually became able to move his toes, feet, ankles, knees, legs and hips with less electrical stimulation.

Electrical barrage
Meas's experience offers clues to how epidural stimulation works in patients with spinal cord injury. Just as continuous exposure to an allergen can eventually make people so sensitized that they sneeze and wheeze at a single grain of pollen, so the electrical barrage "resets the level of excitability of spinal cord neurons," said NIH's Pettigrew. As a result, "even input from exercise could be enough to trigger a motor response."

In addition to regaining voluntary movement, the patients put on muscle mass and felt less tired and generally happier. Summers is coaching baseball. Stephenson goes whitewater rafting and motocrossing in a sidecar. 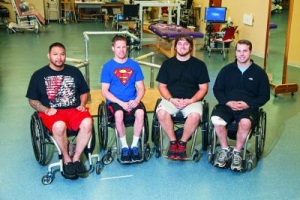 Even researchers who have pioneered competing approaches, using cells, praised the new work. "It's not a cure," said Dr Barth Green, a neurosurgeon at the University of Miami, whose Miami Project to Cure Paralysis is trying to treat spinal cord patients with cell transplants. "But it could be part of a combined biological and bioengineering strategy to help patients not just walk again but also gain control of their bowel and bladder," which many paralysed patients identify as even more important to their quality of life.

The Louisville researchers suspect that with better stimulator technology, spinal cord patients will be able to "work toward stepping," as they carefully phrase it to avoid the hype associated with "walking again." The electrodes in the current device must either be all on or all off, for instance; alternately stimulating the left and right sides might be more effective.

The bioengineering institute at NIH is funding research to develop noninvasive stimulators. That way, the electrical pulses can be delivered through the skin rather than requiring surgery to implant a device, Pettigrew said.

Even in patients with severe spinal cord injuries, and even after experts have pronounced them incapable of recovery, "we believe there is still a capacity for recovery," Harkema said. "It's not necessarily the case that you will never move again."