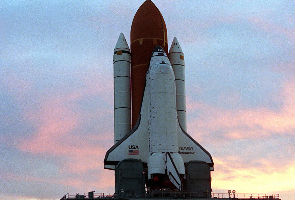 Highlights
NASA on Sunday readied the space shuttle Endeavour for its final mission with liftoff set for 8:56 am (1256 GMT) Monday on the next-to-last flight for the American shuttle program.

Engineers were optimistic that the repaired shuttle would be able to fly on its 16-day mission to the International Space Station, after a technical glitch postponed its attempt last month.

The initial April 29 launch attempt was scrubbed hours before liftoff when technicians discovered a power failure in a heating line that served to prevent fuel from freezing in orbit.

The six-member crew of astronauts including five Americans and one Italian, Roberto Vittori, will deliver a potent physics experiment to probe the origins of the universe during the mission, which will include four spacewalks.

The final rollback of the massive service structure around the shuttle was completed at 12:24 pm Sunday, marking the last major movement on launchpad 39A before the spacecraft is loaded with crew for take off.

The astronauts were to begin their sleeping shift at 4:00 pm before awakening at midnight to do final medical checks, eat a meal and board the shuttle.

A meeting of NASA managers will take place at 11:00 pm (0300 GMT Monday) to decide whether to give a "go" to the fueling operations, which would then start at 11:36 pm Sunday night (0336 GMT Monday) in anticipation of the early morning launch.

The key mission of Endeavour's trip to the orbiting research lab is to deliver a massive physics experiment, the Alpha Magnetic Spectrometer-2, which will be left behind to scour the universe for hints of dark matter and antimatter.

US Congresswoman Gabrielle Giffords of Arizona, the wife of shuttle commander Mark Kelly, arrived safely in Florida after traveling there with family of another astronaut and will watch the launch from Kennedy Space Center, her office said.

"Thanks to NASA for great fly by of launch pad," said a status update on her Facebook page.

Giffords, who was allowed a break by her rehabilitation doctors in Houston to watch the planned April 29 launch, was shot in the head in January during a meeting with local voters.

The 30-year US space shuttle program formally ends later this year after the last flight of Atlantis, leaving Russia's space capsules as the sole option for world astronauts heading to and from the orbiting research lab.

Endeavour's delay has pushed back Atlantis's planned liftoff from June 28 to mid-July, but no final date has been set.

After the final shuttle missions, the three spacecraft in the flying fleet and the prototype Enterprise will be sent to different museums across the country.

Discovery, the oldest in the group, was the first shuttle to retire after its last journey to the ISS ended in March. Endeavour is the youngest, and flew its first space mission in 1991.

With US shuttle program closing, the world's astronauts will rely on Russia's space capsules for transit to the ISS at a cost of 51 million dollars per seat until a new American spacecraft can be built by private enterprise, possibly by 2015.