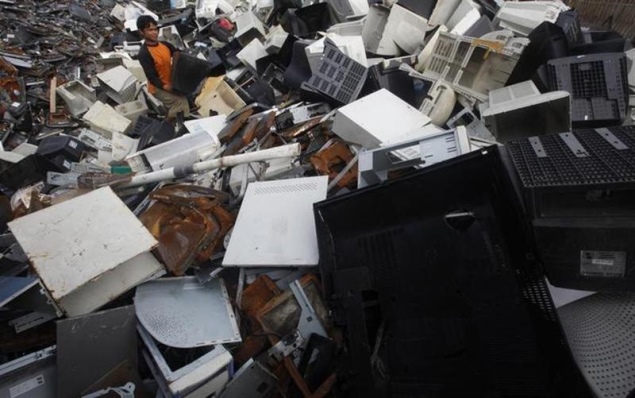 China and other emerging economies have overtaken Western nations in dumping old electronic goods, from TVs to cellphones, and will lead a projected 33 percent surge in the amount of waste from 2012 to 2017, a U.N.-backed alliance said on Sunday.

The report, the first to map electronic waste by country to promote recycling and safer disposal of often toxic parts, shows how the economic rise of developing nations is transforming the world economy even in terms of pollution.

The weight of electronic goods discarded every year worldwide would rise to 65.4 million tonnes from 2012 to 2017 from 48.9 million in 2012, with most of the growth in developing nations, StEP said.

By 2017, it would make the annual piles of old washing machines, computers, fridges, electronic toys and other goods with an electric cord or battery the weight equivalent of 200 Empire State Buildings or 11 Great Pyramids of Giza, it said.

Some waste from rich countries ends up in developing nations, where many people work in hazardous conditions for low wages dismantling it.

Waste from emerging countries, as well as Russia and other former Soviet bloc nations, overtook totals from Western nations such as the United States, the European Union, Japan and Australia around 2012, StEP data showed.

In that year, the West produced 23.5 million tonnes of waste and all others 25.4 million, a shift from the previous estimates for 2007 when the West accounted for most, StEP said.

Mountains of trash
By 2017, trash from the West would rise to 28.6 million tonnes, far less than the 36.7 million from other countries, a side-effect of the economic rise of emerging nations such as India, Brazil and South Africa.

"Although there is ample information about the negative environmental and health impacts of primitive e-waste recycling methods, the lack of comprehensive data has made it hard to grasp the full magnitude of the problem," Kuehr said in the report.

Consumers could help with better recycling, especially at Christmas, he said.

Waste can be valuable if recycled. One study estimated that a million cellphones can yield 24 kg (53 lb) of gold, 250 kg of silver, 9 kg of palladium and more than 9 tonnes of copper.

Sunday's report also showed that the average person on the planet produces 7 kg of electronic waste every year. Americans were among the highest with 29.8 kg each.

Separately, U.S.-based experts trying to track the fate of waste said that about two-thirds of U.S. electronics waste is collected for re-use or recycling and that only 8.5 percent of the collected units are exported.

Jeremy Gregory, of the Massachusetts Institute of Technology and a co-author of the report, told Reuters it was hard to track trade because the waste is often merely described as "mixed metals" on import documents.