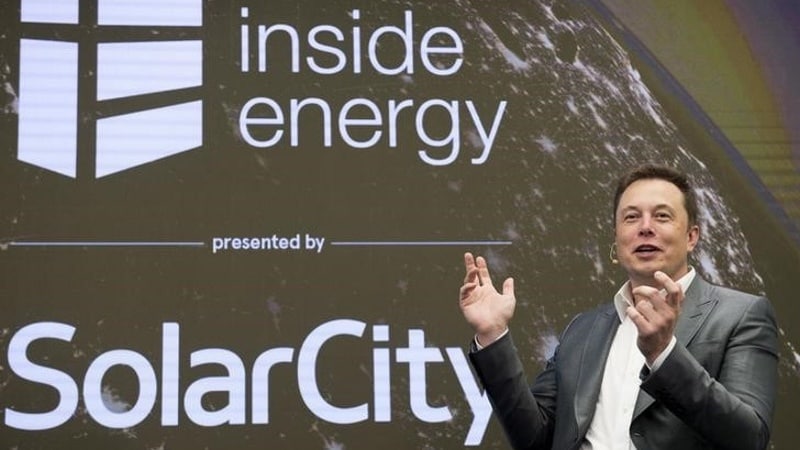 Production of photovoltaic cells and modules for solar-energy systems used by SolarCity will begin in 2017 at SolarCity's factory in Buffalo, New York, Tesla said in a statement late Sunday. The deal would be a win for Panasonic, which has shifted away from consumer electronics products to focus on housing, car information systems and car batteries.

Musk, who is Tesla's chief executive officer and chairman and chief financier of SolarCity, has proposed combining the two companies to give consumers one-stop shopping for an electric car as well as the solar-powered electricity that will power it. But Tesla's bid to acquire SolarCity has been fraught with corporate governance issues because the boards of both companies are deeply intertwined. The Tesla-Panasonic deal is contingent on approval of Tesla's acquisition of SolarCity by the respective shareholders in votes on November 17.

"We are excited to expand our partnership with Panasonic as we move towards a combined Tesla and SolarCity," JB Straubel, Tesla's chief technical officer, said in the statement.

The agreement deepens an existing relationship between Tesla and Panasonic, which are jointly building a $5 billion lithium-ion gigafactory in Nevada to produce batteries for the Model 3 electric car and energy storage products for home and utilities. Tesla said it intends to secure a long-term purchase commitment for PV cells from the Japanese company, according to the statement.

Tesla shares fell 0.9 percent to $194.74 at 9:55am New York time, after slumping 18 percent this year through Friday, while SolarCity skidded 1.8 percent to $19.64. Panasonic climbed 2 percent in Tokyo trading Monday to the highest closing price in eight months.

Close scrutiny
Musk's effort to unite Tesla and SolarCity, which is is projected to lose money for at least two more years, has been under close scrutiny. Six of the seven directors on Tesla's board have SolarCity ties, and SolarCity's CEO is Lyndon Rive, Musk's first cousin. Musk has argued that the fact that the two companies were separate at all "is largely an accident of history."

SolarCity has been trying to stave off a default on its debt. It said in its most recent quarterly filing that it was getting closer to violating bond covenants. The company fired 108 employees in August and scaled back guidance for growth for the year to 900 to 1,000 megawatts from 1,000 to 1,100 megawatts.

SolarCity, among the top installers of residential rooftop solar panels in the US, acquired solar manufacturer Silevo in 2014. The transaction gave SolarCity the factory in Buffalo where Panasonic will begin photovoltaic cell and module production. The arrangement with Panasonic could help allay worries "from both a capital requirement and manufacturing perspective," Ben Kallo, an analyst with Robert W. Baird & Co., said in an e-mail.

In July, Musk articulated his vision for the combined company.

"Create a smoothly integrated and beautiful solar-roof-with-battery product that just works, empowering the individual as their own utility, and then scale that throughout the world," he wrote then. "One ordering experience, one installation, one service contact, one phone app."