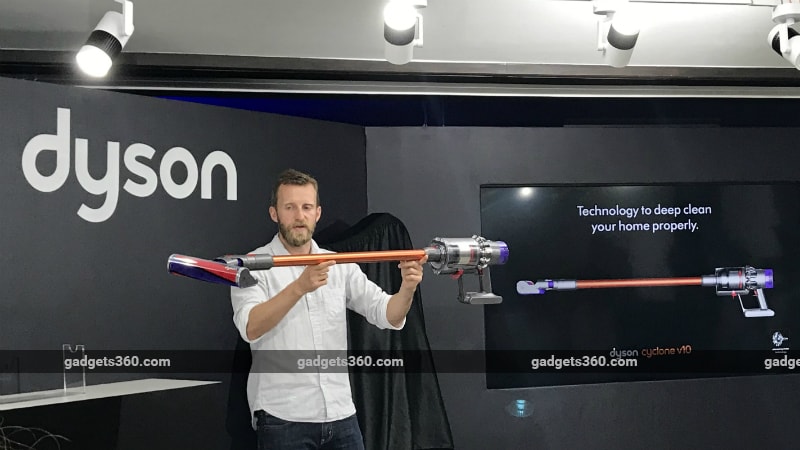 Dyson on Wednesday launched the cord-free Cyclone V10 Absolute Pro vacuum cleaner in India. The British giant that entered the country earlier this year has also upgraded its portfolio of air purifiers by bringing the Dyson Pure Cool air purifier in desk and tower form factors. The company tied up with FICCI Research and Analysis Centre (FRAC) to work together with as many as 100 households in Bengaluru, Delhi, and Mumbai to understand the issue of hidden dust in the country. The ongoing study initially found that on an average, 125 grams of dust was collected from four key areas, including sofa, carpet, mattress, and car. The captured dust even indicated high levels of cockroach faeces. Dyson believes that all this can be resolved through its developments.

The Dyson Cyclone V10 Absolute Pro comes with a price tag of Rs. 44,990 and will go on sale starting July 27. The Dyson Pure Cool air purifier (Tower), on the other hand, is priced at Rs. 43,900 and the Pure Cool (Desk) is available at Rs. 36,900. The air purifiers will be available in two colour options Iron/ Blue and White/ Silver. With the arrival of the new Pure Cool air purifier models, Dyson is also set to phase out the Dyson Pure Cool Link air purifiers that were launched in India in February. The company, however, confirmed to Gadgets 360 that it doesn't have any plans to discontinue the existing vacuum cleaner models, including the Dyson V8 Absolute+ and Dyson V7 Animal. Furthermore, it has expanded its India retail footprint by opening two new stores, launching 'In-Home Demo' services, and selling its offerings online through Dyson.in and Amazon.

Unlike the previous vacuum cleaner models, Dyson has used its digital motor V10 that is touted to be the company's fastest and the most advanced digital motor - spinning at up to 125,000 rpm. The motor weighs 150 grams, which is significantly less than a traditional motor that has 800 grams of weight, and comes in a compact size. Also, there are built-in sensors on the motor that makes it an intelligence piece of hardware on the new vacuum cleaner. Alongside the motor, the Cyclone V10 has all-new two motorised cleaner heads, one for carpets and the other one is for hard floors. The cleaner heads have nylon coating along with carbon fibre filaments. Also, there are seven additional tools for cleaning various surfaces such as sofas, upholstery, mattress, nooks, and crevices among others.

Being a cord-free vacuum cleaner, the Dyson Cyclone V10 Absolute Pro is powered by a lithium battery, and the company is touting improved electronics and battery system management with the new model. Dyson claims that the configuration is capable of delivering up to 60 minutes of fade-free suction on the maximum mode in a single charge. There is also the company's iconic bag-less design that uses 'Cyclone' technology to capture allergens, dust, and bacteria. Similarly, there are pre- and post-motor filters that have been wrapped around the motor as one sealed unit to offer not just a compact design but also improved filtration that is touted to be capable of capturing 99.97 percent of particles in as small as 0.3 microns of size. The vacuum cleaner also features a 'point-and-shoot' hygienic bin emptying mechanism that helps users throw the dust collected without having to touch it with their hands.

In addition to the new vacuum cleaner, Dyson has launched the Pure Cool air purifier that apart from a different form factor, is otherwise identical in its Desk and Tower models. In both cases, it has three built-in sensors, including PM (particulate matter) sensor, gas sensor, and temperature sensor. While the PM sensor helps to identify the presence of PM 2.5 and PM 10 pollutants, the gas sensor detects the amount of VOCs (Volatile Organic Compounds) such as benzene and formaldehyde and NO2 and the temperature sensor is used to measure relative humidity and temperature. An LCD panel is available on the air purifier to show the air quality and related information in real time. Further, there is a Dyson algorithm to process the input from the three sensors to display air quality readings.

Dyson has used an improved 360-degree filter on the Pure Cool that split into individual HEPA and carbon layers. The nine metres of condensed and sealed borosilicate microfiber filters are rated to capture 99.95 percent of particle pollution, including allergens, bacteria, pollen, and mold. The activated carbon filters, on the other hand, have Tris (trishydroxymethylaminomethane) to increase the absorption efficiency, remove gases including NO2, formaldehyde, and benzene. The filters are designed as per the industry standards of EN1822 and H13-A filter class.

Using the proprietary Air Multiplier technology on the Pure Cool air purifier along with 350-degree oscillation, Dyson has enabled the machine to project over 360 litres of purified air per second. There is also a new diffused airflow mode that helps users avoid a cooling effect in winter. For summers, the air purifier has a forward airflow mode that cools as a fan alongside purifying the air. The air purifier can also be controlled using the Dyson Link app that is available for iOS and Android devices.

Dyson says that unlike using the traditional laboratory test method 'Clean Air Delivery Rate' under which the air purifiers are being tested in a small chamber of 127 square feet with an added fan to circulate the air, it used the POLAR test method that is based on a larger room size of 290 square feet - with no added fan. Eight sensors have been installed in the corners of the room and one in the centre to collect air quality data every five seconds. All this helps to understand how the new air purifiers are capable of purifying the air in real homes.