Computex 2013 kicks off with spotlight on wearable technology 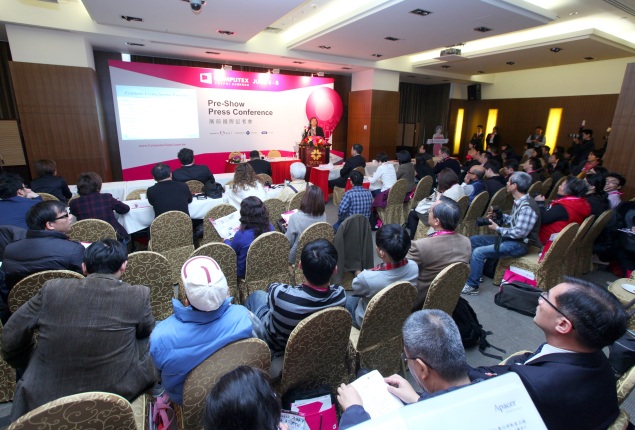 Wearable computing, the next great frontier in consumer electronics, is expected to draw crowds to Taipei's Computex trade fair this week as interest in the nascent technology surges.

With rumours of an Apple smart watch around the corner and ongoing hype around Google's pioneering Glass, all eyes will be set on the five-day tech extravaganza's "trend zone" where some lesser known brands could also shine.

Sonostar Inc, a Taipei-based company that currently sells handheld GPS devices that aid golfers, is among the manufacturers soon to dabble in the field of wearable computers.

"We saw the huge potential market in 2009 and decided to do research on the smart watch and related apps," said spokeswoman Marie Liu.

Not only will its new watch provide golfers with range-finding services and access to the layouts of 30,000 golf courses, it can also be used by people when they jog or ride bikes to record distance travelled and calories consumed.

By coupling the watch with a smartphone for Internet connectivity, the device will be able to access social media, instant messaging and allow users to read ebooks via its e-ink paper display that enables its 1.73-inch long screen to be viewed clearly under sunshine.

Sonostar said the watch is scheduled to hit the market in the third quarter with a price tag of $179.

The frenzy over wearable technologies was sparked after Google surprised tech watchers by announcing it was developing a wearable computer with a head-mounted display, known as the Glass.

Glass links to the Internet using Wi-Fi hot spots or, more typically, by being wirelessly tethered to mobile phones. Pictures or video are shared through the Google Plus social network.

While rejecting the wearable idea of "glass", Apple chief Tim Cook said last month that he preferred watches or other accessories during an interview in California.

He forecast that there will be "tons of companies playing" in the wearable computing sector. Apple has long been rumoured to launch an "iWatch" device to be worn on the wrist.

Another example of wearable technology to be demonstrated at the Taipei show is the MindWave Mobile, a brain-computer interface which allows headset-wearing users to control computers and devices, as well as display brainwaves on screen.

But despite the buzz about wearables, their future will be decided by whether their applications really meet the needs of consumers, analysts say.

"If I had to make a prediction I'd say Google Glass is a Segway for the face," Edward Tenner, author of "Our Own Devices: How Technology Remakes Humanity," told AFP, referring to the personal transport device which failed to meet initial hype.

"There's at least one Segway on the Princeton campus. I still see them occasionally in New York City and Washington DC. They're the public face of a certain subculture."

"It's really impossible to speculate on the future of technological genres in the long run," he said.

As well as the cutting-edge and conceptual, Computex, now in its 33rd year, will also feature a wide array of real-world products that will soon be available to consumers.

"Computex is a bit more like the CES in the United States that centres on consumers' need," said David Liu, from the Taipei Computer Association which is the co-host of the trade exhibition.

More than 1,700 exhibitors will display their latest lines of products at 5,000 booths in the exhibition, drawing an estimated 130,000 visitors, including 36,000 visitors from abroad, the organisers said.