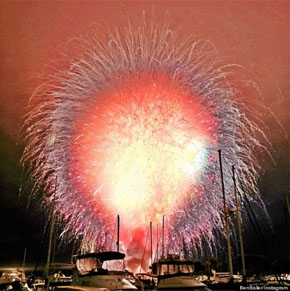 A computer glitch was blamed Thursday for an explosive July 4 firework display in California, in which an entire show's pyrotechnics went off simultaneously and burned out in less than 30 seconds.

Independence Day revelers were left disappointed after the all-too-brief Wednesday night display, which was designed to last 15 minutes with fireworks launched from five different locations in San Diego Bay.

Instead all the rockets went off at once, creating a series of gigantic explosions. Videos posted on YouTube included many people asking "Is that it?" as the music soundtrack continued.

"It's just something that obviously was beyond our control," said August Santore, owner of family-run New Jersey-based Garden State Fireworks company, who was involved in co-ordinating the show.

"Anyone who has ever had any kind of computer situation, or otherwise -- it's not perfect -- so we've never had this situation before and God willing, we'll never have anything like this again," he added.

No-one was seriously injured in the faulty launches, which came as Americans enjoyed barbecues and firework displays across the country to mark the signing of the Declaration of Independence on July 4, 1776.