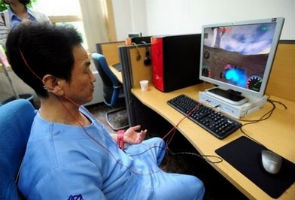 Highlights
Choi Hyun-Min loses all track of time when he sits down to play computer games, but the sessions usually last at least 10 hours.

Choi (not his real name) is among hundreds of thousands officially considered to be Internet addicts in South Korea, one of the world's most wired nations.

Now the 16-year-old student is undergoing therapy at the "Save Brain Clinic", which opened in early May and styles itself as the country's first specialist clinic for such addicts.

"It is a serious issue and parents need to feel less embarrassed and bring children to hospitals for treatment before it's too late."

Before treatment starts, the hospital provides a diagnosis through a survey, a brain image scan and psychological tests.

"Both tests and treatment programmes are scientific and to a certain extent proven effective," Lee told AFP.

Many parents have made inquiries. But only three people, including Choi, began the five-week course, which intends to focus on adolescents but is also open to adults.

Lee said parents have difficulty admitting their children have problems and feel embarrassed to bring them to a mental hospital.

Although Internet addiction is not accepted as a mental disorder, he said, the problem is already deep-rooted in South Korean society.

"Playing online games is fun, thrilling and comforting at the same time," Choi, clad in a hospital gown, told AFP. "All I think about is how to play without being interrupted."

His addiction began around age nine. Once, he said, he punched a hole in the window of his parents' room to retrieve a computer monitor which they had locked away.

He had also stolen money to play at Internet cafes for hours, snacking on instant cup noodles.
Early last year, Lee said, a 31-year old man was brought to the hospital by his parents after playing games in an Internet cafe for 780 hours excluding short breaks.

There have also been several fatal incidents. Last year a mother was arrested for killing her three-year-old son while she was tired from Internet game-playing.

A 15-year-old boy committed suicide after killing his mother for scolding him over excessive playing of computer games.

In an especially tragic case, a 41-year-old man was sentenced to two years in prison after he and his wife left their baby daughter to die at home of malnutrition while they were in Internet cafes.

They were raising a "virtual child" in an online game.

Figures from the family ministry estimate there are two million Internet addicts in a nation of 48.6 million. Among them, 877,000 are aged between nine and 19.

Despite strong opposition from the computer games industry, parliament passed a bill forcing online game companies to block users aged under 16 from playing between midnight and 6.00 am.

It goes into force this November.

While the government ponders policies to prevent Internet addiction, Lee said his clinic will focus on treatment as early as possible.

"It will be too late if we only start treatment after Internet addiction has been acknowledged as a mental disease," he said.

"We will start now, hoping more medical effort and attention will be given to the issue."
Comments