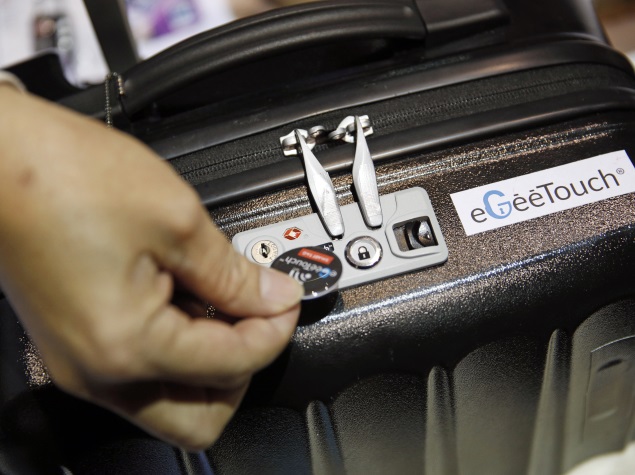 US-based start-up Digipas has launched a "smart" lock that allows users to open or lock their luggage with just a swipe of their smartphone screens.

Called eGeeTouch, the new lock could be a boon for travellers who have a tendency to misplace the keys to their suitcase locks or forget the passwords of conventional combination locks.

With the new electronic lock, a tap of their NFC (Near Field Communications)-enabled smartphone, tablet or smartwatch could grant access to their luggage.

NFC enables transfer of small amounts of data between two devices held a few centimetres from each other, but unlike Bluetooth, it requires no pairing code.

"The world's first smart electronic lock is embedded with state-of-art intelligent access security and identification technologies, and resolve the disadvantages associated with using conventional mechanical locks," the company wrote on its website.

"It requires no key to misplace, no tiny digit-wheel to dial, and no combination code to memorise, thus no fuss for asset owners to secure their personal belongings in luggage, lockers, gates, containers, storage room or cabinets," it added.

What is more, eGeeTouch can also be accessed using a pre-paired NFC smart tag or sticker if the user does not have an NFC-enabled device, the website Mashable reported.

The lock runs on the power of a battery which can be recharged via an external USB portable power source.