Apple under pressure to deliver 'the next big thing' 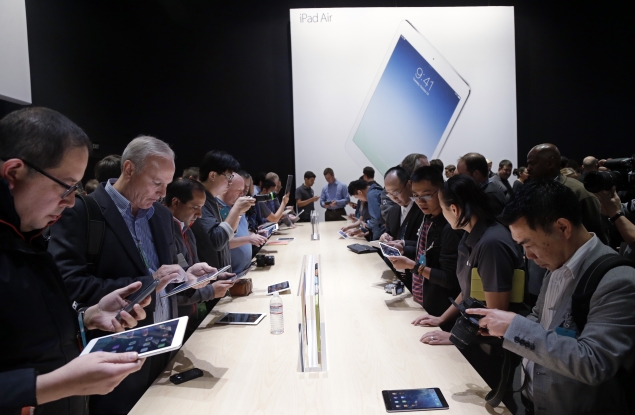 As Apple polishes its culture-changing gadgets to gleam during the holiday shopping season, pressure is growing for it to deliver the next big thing.

The California tech giant known for dazzling innovation orchestrated by late legendary co-founder Steve Jobs has rolled out impressive improvements to its iPhones, iPads, and Macintosh computers since Tim Cook took over as chief in 2011.

While Apple shattered sales records with its recently released iPhone 5 and was expected to see buyers around the world snap up new iPad Air and iPad mini tablets hitting the market next month, the company was increasingly expected to rock the world with something transformational.

"We are still waiting for that."

Baker and other analysts note that while people may be eager for Apple to wow them anew, it is premature to start thinking the pace of innovation at the company is off kilter.

Jobs introduced the iPhone about five years after Apple launched the iPod, and it was another three year before the iPad debuted in early 2010.

"Apple is still within the window of opportunity to bring something that is a completely new category," Baker said.

"If they haven't done it by the end of next year, then there will be reason for people to be a little more nervous."

For now, what Apple is missing is the mastery Jobs had of managing expectations, referred to as his "reality distortion field," in a way that left the public impressed with whatever it introduced.

"Apple is good at inventing new products and at maximizing profitability of its product range over time through software innovations and clever marketing," Forrester analyst Thomas Husson said in a blog post after Apple ramped up its iPad line on Tuesday.

"Yes, at some point, the company will need to disrupt a new market once again, but today's announcement is really about making sure it maintains the premium brand experience for the holiday season when competition is heating up."

Tim Bajarin, president of Creative Strategies, believes that Apple has set the foundation for major product innovation with significant developments in chips powering its mobile devices and the software they run.

Apple hasn't lost its innovative mojo, it has infused its array of products with powerful 64-bit processors and compatible software, opening the door to formidable new-generation gadgets whether they be wearable computers or something else entirely, he said.

"This year Apple was building the technology foundation to deliver what I would consider their next big thing, whether it is an iWatch, a new television platform or whatever," Bajarin added.

"I think next year will be their big year for innovation."

Under-the-hood innovations made by Apple this year have set the stage for mobile devices that pack computing power on par with those of desktop machines.

Spending a couple of years incrementally improving popular Apple products and building a springboard for the "next big thing" has been Apple's style for quite some time, according to the analyst.

"In each of those cases when Steve (Jobs) had these iterative periods they were building new foundations of innovative technologies," Bajarin said.

"They have used the last two years to lay the next groundwork; 2014 is going to be their next big year."