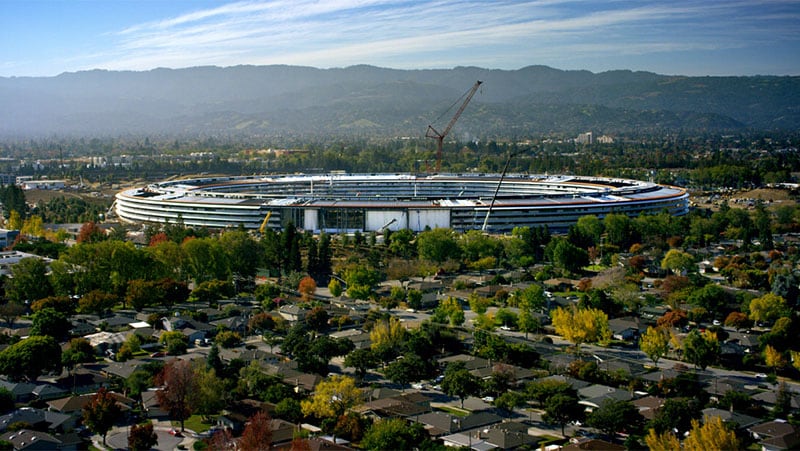 Jony Ive, Apple's chief design officer, has shed more light on the design, construction and working of Apple Park in an interview with WSJ.

Ive said that during the early years, Apple considered more complex forms than the ring shape it settled on, including a infinity sign and a trilobal shape, sort of like a giant fidget spinner.

In terms of how the 260,000-square metre four-storied circular building will be split up, Ive's design studio and other executive suites, along with the Apple Watch and Siri teams, are located on the fourth floor. The last of those will also occupy some part of the third floor. As for those working on iPad and Mac, their offices will be located in the middle levels.

Then there's the main cafeteria, which comprises a four-level atrium that opens with nearly 200,000-kg heavy glass doors on both sides. Apple Park will also house a new location for the company's product-launch events – the Steve Jobs Theater – which will be used to host small concerts, meetings with Tim Cook and Ive, and seminar talks as well.

Though the company's new headquarters opened to employees in April this year, construction is still ongoing in other parts. Ive's own team is one of the last ones on the moving roster, and it plans to relocate sometime in autumn, around the time the new iPhone will be unveiled.

Since the campus is so huge, Apple has mapped it on Apple Maps, and commissioned 2,000 custom bikes that have been painted "Apple Grey". To ferry people from parking spaces and nearby transit stations, there are electric golf carts and a commuter shuttle.

The WSJ piece also reiterated details that have been discussed before, such as the use of renewable power only for Apple Park. It will draw around 80 percent from roof solar panels and fuel cells, with the rest contributed by other sources.

An open, airy design was one of the most important requirements for Apple, and hence the building makes use of a ventilation system that brings in outside air through gaps in the walls and cools it with chilled water to maintain temperature between 20-25 degrees Celsius.

Ive also noted that the Apple Park is made more special for him because it's the last big project he worked on with late co-founder Steve Jobs. The two began talking about it while taking a walk in London's Hyde Park in 2004, and wished to model it like Stanford University, allowing for acres of parkland to facilitate walks and employee interactions.

In the interview, Ive also mentioned that he was inspired by the look of Stormtroopers while designing Apple's earbuds. That makes it sort of a what goes around comes around thing, considering Michael Kaplan – the costume designer on Star Wars: The Force Awakens – was himself inspired by Apple.