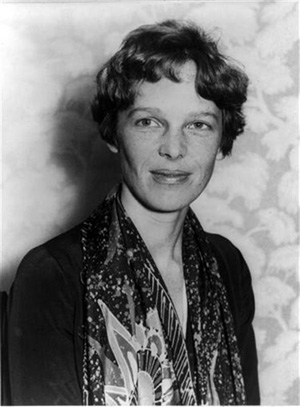 Researchers seeking to chronicle Amelia Earhart's fate 75 years after she vanished over the Pacific are to set off from Hawaii on a $2 million expedition on Tuesday to look for wreckage of her plane near a remote island where they believe the U.S. aviator died as a castaway.

Researchers will travel 1,800 miles (2,900 kilometres) by ship from Honolulu to Nikumaroro in the Republic of Kiribati, where they believe Earhart's Lockheed Electra may rest in waters offshore from where they suspect she survived for weeks or months in 1937.

Richard Gillespie, executive director of The International Group for Historic Aircraft Recovery (TIGHAR), theorizes Earhart's plane was washed off the reef by surf days after Earhart and her navigator, Fred Noonan, landed on Nikumaroro, about 400 miles (644 km) southeast of their Howland Island destination.

The duo had departed Papua New Guinea July 2 in Earhart's quest to circumnavigate the globe along an equatorial route. Gillespie said circumstantial evidence collected on previous trips to Nikumaroro makes a strong case for his theory that Earhart ended her days as a castaway, ultimately perishing in the island's harsh conditions.

Discovered items include what appears to be jar of a once-popular brand of anti-freckle cream from the 1930s, a clothing zipper from the same decade, a bone-handled pocket knife of the type Earhart carried, and piles of fish and bird bones indicative of a Westerner trying to survive.

"We have hints as to how long she did survive," Gillespie said. "Based on the amount of bones, she survived a number of weeks, maybe months. This is a whole chapter in Amelia Earhart's life that no one ever knew. It's heroic stuff."

The state of the discovered fish bones found by what Gillespie believes was Earhart's campsite leads him to believe they were consumed by a Westerner.

"Pacific Islanders usually eat the head of the fish. That's often what they think is the best part. This person isn't eating them," he said.

"We found giant clamshells ... A Pacific Islander will catch them while open and cut them out. There were several up at the campsite bashed in," he added, saying others were laid up concave as if to catch rainwater.

"We've found bottles standing in what was a campfire, with the bottoms melted but the top not heat-damaged, and pieces of wire fashioned into a loop. It looks like someone was boiling water to make it safe to drink."

Skeletal remains
Researchers have also found bone fragments Gillespie said were too compromised to provide DNA for testing. Gillespie believes a partial skeleton found by a British officer in 1940 may have been Earhart's. The skeleton was taken to Fiji.

A doctor there concluded it belonged to a man, but Gillespie said a reexamination of the recorded bone dimensions indicate the remains were of a Caucasian female. Found along with the skeleton were a man's and woman's shoe, and a sextant box.

What happened to the bones remains a mystery. Gillespie traveled with his group to Fiji last summer to try to find them based on old records. He said they did find a box of bones, but that testing showed they belonged to a Polynesian female.

Such disappointments have happened before in the 24 years Gillespie has been looking for the answer to Earhart's final chapter. At one point TIGHAR believed it had found a navigator's book case from her plane. Another time they thought they would find her plane in the lagoon. Both leads proved false.

Gillespie says there's been no evidence of the fate of Earhart's navigator, Fred Noonan. "We don't know much about Fred. The partial skeleton found in 1940 was that of a woman who had died by the campsite."

He theorized that even if Earhart was catching fish and birds she could have starved to death, or faced other risks.

"You can be getting food, but you don't have enough calories to replace the calories you're expending catching it. The reef is slippery and if you get cut it will become infected immediately and can lead to blood poisoning. Or there could have been injuries from the landing or crash."

In his previous nine trips there, Gillespie has experienced firsthand how hard surviving there would be.

"The island is four degrees south of the Equator. The sun is a hammer. There is no fresh water. When you get ashore you have to cut a trail through the jungle to the lagoon side. There are black tip sharks all over the place."

Throughout the years of looking, Gillespie had always wondered how Earhart might have collected water, as the only containers they'd found were small cosmetic bottles.

"Then on last expedition there was a big rain and squall while we were working in the forest The Boca trees there had large leaves," he said, adding that rain could collect on leaves on the ground. "With a small bottle you could collect from trees and roots."