Amelia Earhart - a name that will live for eternity 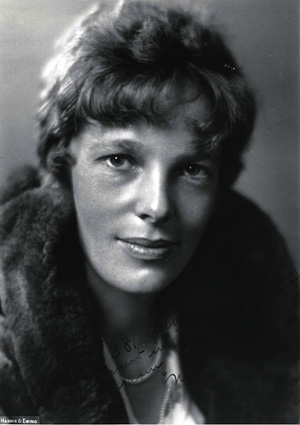 Amelia Earhart was the second child born to Samuel Stanton Earhart and Amelia Amy Earhart. Amelia was always an adventurous kid who loved to explore her surroundings.

Incidentally when she spotted her first aircraft at the Iowa State Fair in Des Moines it did not fascinate her and she never gave it a second look.

Throughout her troubled childhood, she had continued to aspire to a future career and never deviated from the goals which she had set for herself.

The turning point of her life came in the year 1928 when Frank Hawks (an air racer) gave her a ride in his aircraft. At that very moment, 300ft above the ground she decided that she had to fly. From that point onwards there was no looking back.

Amelia knew that her goal in life was to become a pilot. She chose a woman named Neta Snook, who taught her to fly.

With her sheer courage, determination and hard work Amelia took the aviation fraternity by total surprise and set the world record for female pilots when she flew her plane at an altitude of 14,000 feet.

But due to financial constraints her career took a downturn and she was forced to sell her plane. It got worse when she couldn't find a suitable job for herself and was eventually forced to quit the Massachusetts Institute of Technology.

In 1928, Amelia rode on a transcontinental airplane flight as a mere passenger but also helped the pilot in maintaining the flight log. The flight made her the first woman to cross the Atlantic Ocean by air.

But it was the transatlantic flight that marked the high point in Amelia's accomplishments. She was the first women to fly solo across the North Atlantic continent and back.

In 1937, Amelia Earhart and Fred Noonan, a fellow pilot, took off from Miami in what was to be Amelia's final and most famous flight. They were to fly around the world, and Amelia was to become the first woman to do so.

Amelia and Fred stopped every night at designated stops for refuelling and repairs. The last time they were seen was during their stop at New Guinea. Their next stop was to be Howland Island. When they didn't arrive there, people concluded that they had disappeared. Searches were conducted in the Pacific Ocean but nothing was found.

In a time when a women's place was in the home , Amelia Earhart showed women that they were equal to men and could lead equally adventurous lives . Amelia had no children. She devoted her life to two things : promoting women rights and flying.