After Higgs breakthrough, CERN readies for next cosmic quest 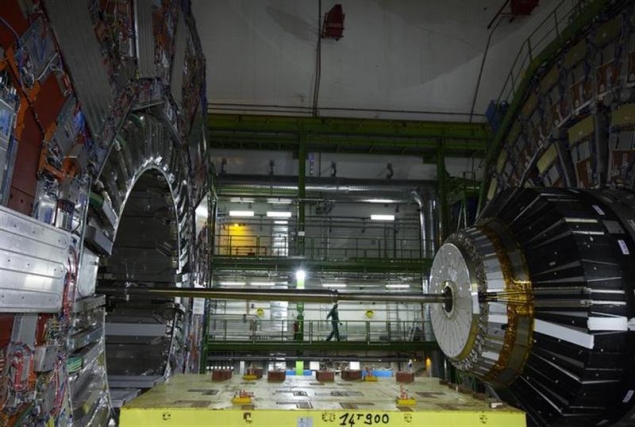 A year ago, the world's largest particle collider made one of the greatest discoveries in the history of science, identifying what is believed to be the Higgs Boson the long-sought maker of mass.

Today, its computer screens are dark, the control desks unstaffed and the giant, supercooled tunnel empty of the crashing proton beams whose snapshots of the Big Bang helped flush out the elusive particle.

But the silence is an illusion.

Behind the scenes, work is pushing ahead to give the vast machine a mighty upgrade, enabling it to advance the frontiers of knowledge even farther.

And when experiments resume in 2015, scientists at the European Organisation for Nuclear Research (CERN) will use its enhanced power to probe dark matter, dark energy and supersymmetry ideas considered as wild as the Higgs Boson was, half a century ago.

As engineers focus on the technical mission, physicists are sifting through the mountains of data that the Large Hadron Collider (LHC) has churned out since 2010, for there could be more nuggets to find.

"The things that are easy to spot have already been exploited, and now we're taking another look," said Tiziano Camporesi of CERN, noting wryly that dealing with the unknown was, well, unknowable.

"We always say that astronomers have an easier task, because they can actually see what they're looking for!"

The LHC's particle collisions transform energy into mass, the goal being to find fundamental particles in the sub-atomic debris that help us to understand the Universe.

At peak capacity, the "old" LHC managed a mind-boggling 550 million collisions per second.

"We give the guys as many collisions as we can," said Mike Lamont, head of its operating team. "That's our bread and butter."

"Most of that stuff is not very interesting, so there are real challenges sorting out and throwing most of that away, and picking out the interesting stuff," he explained in the tunnel, which mixes installations fit for a starship with the low-tech practicality of bicycles for inspection tours.

CERN's supercomputers are programmed to identify within microseconds the collisions worth more analysis chunks of a few hundred per second before thousands of physicists from across the globe comb the results to advance our knowledge of matter.

"We want to understand how that behaves, why it sticks itself together into tiny things that we call atoms and nuclei at really small scales, into things that we call people and chairs and buildings at bigger scales, and then planets and solar systems, galaxies at larger scales," said CERN spokesman James Gillies.

Puzzles of science
CERN's work can bemuse neophytes, but the researchers find ways to make it simple.

"Everybody knows what an electron is, especially if they put their finger in an electric socket," joked Pierluigi Campana, whose team has just provided the most exhaustive confirmation to date of the Standard Model, the chief theoretical framework of particle physics conceived in the 1970s.

They achieved the most accurate measurement yet of a change in a particle called a Bs, showing that out of every billion, only a handful decay into smaller particles called muon, and do so in pairs.

For the experts, that finding was almost as thrilling as tracking the Higgs Boson nicknamed the God Particle.

It was theorised in 1964 by British physicist Peter Higgs and others in an attempt to explain a nagging anomaly why some particles have mass while others, such as light, have none.

It is believed to act like a fork dipped in syrup and held up in dusty air. While some dust slips through cleanly, most gets sticky in other words, acquires mass. With mass comes gravity, which pulls particles together.

The Standard Model is a trusty conceptual vehicle but it still lacks an explanation for gravity, nor does it account for dark matter and dark energy, which comprise most of the cosmos and whose existence is inferred from their impact on ordinary matter.

Some physicists champion supersymmetry, the notion that there are novel particles which mirror each known particle.

"We have a theory that describes all the stuff around us, all the ordinary, visible matter that makes up the Universe. Except, the problem is, it doesn't. It makes up around five percent of the Universe," said Gillies.

The LHC replaced the Large Electron-Positron Collider (LEP), which ran from 1989 to 2000. It came online in 2008, but ran into problems, forcing a year-long refit.

It went on to reach a collision level of eight teraelectron volts (TeV) an energy measure compared to the LEP's 0.2 TeV.

"Every time we pass a significant amount of data collected, someone will find an excuse to open a bottle of champagne," said physicist Joel Goldstein, glancing at a lab corner piled with empties.

"We're going to run out of space eventually!"