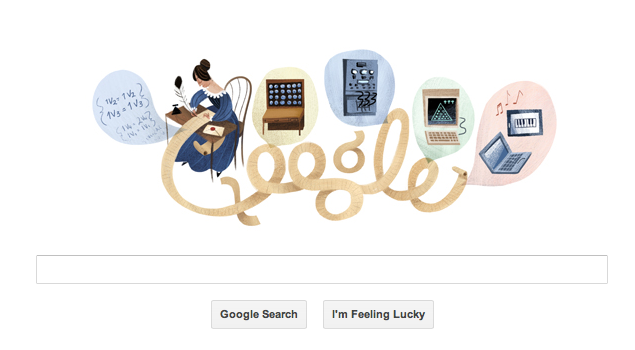 Ada Lovelace, born Augusta Ada Byron, was an English mathematician and writer widely known for her work on Charles Babbage's early mechanical general-purpose computer, the Analytical Engine. She worked on what is believed to be the first algorithm intended to be processed by a machine, making her the world's first known computer programmer.

The Google doodle depicts the evolution of computers from showing Ada Byron herself on the left, and as we move to the right, we move forward to punch cards, desktops and finally, the modern day laptops and tablets.

Charles Babbage was an English mathematician, considered to be the father of the computer. He first proposed the use of a mechanical computer in 1822 for computing in the fields of astronomy and mathematics. He received funding from British government to build such a machine in 1823, and spent the next several years trying to build the Difference Engine.

By the time the government killed the project in 1842, they had given Babbage over ₤17,000, without receiving a working engine. By then, Babbage had moved on to building his more general purpose Analytical Engine, something he first described in 1837.

The Analytical Engine consisted of an arithmetic logic unit, control flow in the form of conditional branching and loops, and integrated memory, a design that continues to form the backbone of modern-day computers.

Ada Lovelace met and corresponded with Charles Babbage on many occasions, including socially and in relation to Babbage's Difference Engine and Analytical Engine. Ada became fascinated with his Difference Engine and translated Italian mathematician Luigi Menabrea's memoir on the Analytical Engine, writing detailed notes on the Engine which went beyond the scope of the memoirs.

These notes included the method for calculating a sequence of Bernoulli numbers with the Analytical Engine. For this reason, she is considered to be the world's first known computer programmer, though her code never ran on the Analytical Engine, as the machine itself was never completely built.

Ada Lovelace died from uterine cancer at the age of thirty-six, on 27 November 1852.

LG Optimus G2 rumoured to feature a 5.5-inch full-HD display
Gmail back up after extended outage