Acer Air Monitor With IFTTT Integration Launched Ahead of MWC 2017 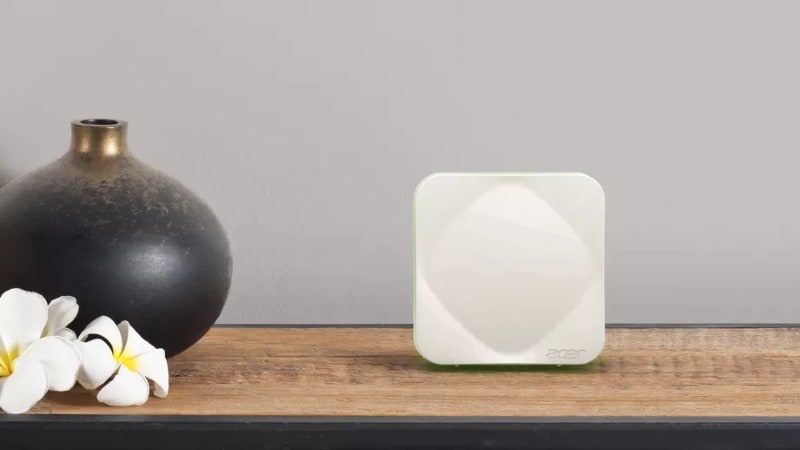 According to Acer, the Air Monitor uses a wide variety of sensors to track six key air quality indicators, including TVOC (Total Volatile Organic Compounds), carbon dioxide, PM2.5, PM10, temperature, and humidity. The data collected can be viewed and monitored using the app, wherein you can also send alerts via push notifications if any of the quality indicators cross the predefined limits. The Acer Air Monitor is designed with a simple and sleek chassis that mounts an LED light, which changes colours based on the degree of air quality. There's also an integrated sensor that checks for the ambient light and turns the LED off to prevent distracting you from your slumber.

The Acer Air Monitor also comes with the third-party IFTTT integration that lets you send actions to it as and when air quality changes. For example, you can trigger IFTTT to blow the Air Monitor in full speed if the air quality crosses significant marks above the predefined parameter. This all can be done using Acer's companion app for smartphones. As we mentioned, the Acer Air Monitor will be showcased at the MWC trade show. It's worth mentioning that the exact specifications, price and availability will vary by region, Acer notes.

Commenting on the sidelines of the launch, Wayne Ma, General Manager of IoB, Acer Cloud Technology (Taiwan) Inc., said, "In realization of our vision of the IoB (Internet of Beings), an IoT based on intelligence, we're excited to introduce the Acer Air Monitor to the market." He further added, "Research from the US and EU [Europe] both show that people on average spend about 90% of their time indoors; at home, at work, and everywhere in between, and we would like to empower people with actionable information to make better life choices."