What It Feels Like to Drive a Tesla on Autopilot

Share on Facebook Tweet Snapchat Share Reddit Email Comment
I was in the driver's seat of the Tesla Model S, but I wasn't really driving. My hands weren't on the steering wheel. My feet weren't on the pedals. Software and sensors were doing the real work. I had been reduced to a back-up system. I monitored the city traffic mostly out of habit. I changed lanes with a flick of the blinker, my blind spot checked for me and the Tesla deciding when to move on its own.

Then, the car in front of us slammed on its brakes. Boredom disappeared. Traffic went from 20 mph to zero in a flash. The very expensive nose of the signature red Tesla Model S P90D sedan was hurtling toward a Honda's rear bumper. A collision was coming.

Normally, my foot would be pressing the brake by now. But this Tesla was in Autopilot mode. And I wanted to trust it.

This $132,700 electric car is supposed to be able to drive itself in many situations - even a bit with no one in the vehicle at all. Just days earlier, Tesla chief executive Elon Musk had said his company wasn't aware of any accidents while its thousands of vehicles were in Autopilot mode. No accidents! I didn't want to snap that streak. Musk also had insisted that Autopilot, despite being unveiled only last October, was already probably better than human drivers. But only probably.

I felt a flush of panic. In the passenger seat, my wife covered her head in her hands.

The Tesla slowed itself to a stop three feet from the Honda's bumper, my foot still hovering nervously over the brake pedal. It then drove on like nothing happened.

After several days of driving (if that's the right word) Tesla's Autopilot in a range of conditions, including snow (where it struggled), it is clear both how stunningly advanced the technology already is and how much work remains.

Using it makes you both giddy and alarmed in one shot because crashing software is very different from software crashing a car.

But when it works, it seems like a miracle.

For this reason, every automaker - plus tech companies like Google and Apple is making driverless promises. The hype is deafening. The topic dominated the recent North American International Auto Show in Detroit: Nice car, but what are your ideas for driverless?

It can all sound a bit breathless, like it's just around the corner. Many automakers have coalesced around 2020 as the year when fully self-driving vehicles will be available to the public. Some analysts think that's too optimistic, that it will take 10 years or more - and even then, the cars might be restricted to taxi fleets.

The challenges are enormous. How do you program a car to handle all possible road scenarios?

"We don't know what we don't know," Jim McBride, Ford's technical leader for autonomous vehicle development, told me at the Detroit auto show. "That's what I think is the No. 1 technical challenge."

Most driverless programs are "moonshots." They want to perfect a fully autonomous vehicle before daring to let the public take a ride. That's the path taken by Google, for example, whose cute pod cars have soaked up the lion's share of the limelight. But it could be years before Google-powered vehicles are free to roam streets beyond limited test circuits in Mountain View, California, and Austin, Texas.

Tesla, led by Musk, has chosen a different path. And it's a fraught one.

Tesla has been rolling out new self-driving features to its vehicle fleet via wireless software updates. One day last October, a Tesla suddenly could steer itself. That was the Autopilot feature. A couple weeks ago, Teslas pushed out software update version 7.1, with Summon. That allows the car to drive up to 40 feet by itself while empty, such as pulling out of a driveway or tight parking space. In a tip of the hat to the trickiness of the feat, a Tesla in Summon moves at only about 1 mph and comes with the warning that it should only be deployed on private property.

I played with Summon repeatedly, both for myself and curious family and friends, because it was just so cool to watch, even if the empty Tesla did little more than roll forward in the direction of me holding the key fob. It made everyone who saw it smile.

Officially, Autopilot is still in "public beta." Tesla is unique in treating its vehicles like software, where users test out the kinks. Lessons and mistakes are beamed to the automaker's headquarters. The product is then refined. The Tesla fleet is like a hive mind, each vehicle a probe making the software better.

But a human being still must remain in the loop, ready to intervene at any moment. The vehicle flashes a "hold steering wheel" warning if it doesn't sense your hands on the wheel, the interval determined by how much confidence the technology has in what it is doing. And if the computer senses it is out of its depth, it will sound an alarm and flash a "Take over immediately!" warning.

That happened to me twice. And nothing makes your heart beat faster. 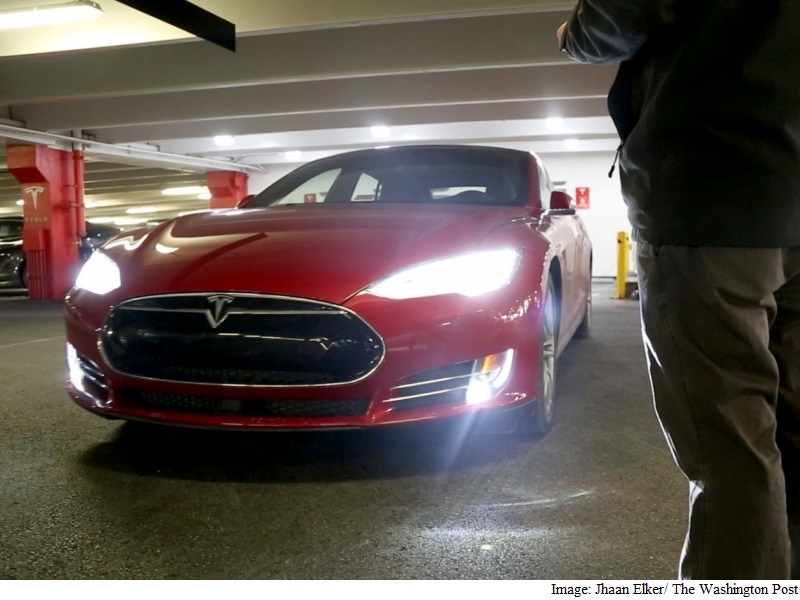 The Tesla Autopilot is clearly a building block for what's to come. Musk said he imagines the Summon feature could eventually allow drivers to call a Tesla to drive itself across the country (legal hurdles aside). Or, imagine summoning your Tesla from home to pick you up at the airport.

But Tesla's strategy has its risks, the kind that must give its attorneys angina. You never know what people are going to do. Last fall, shortly after Autopilot debuted, video clips showed Tesla drivers trying out the new feature by climbing out of the driver's seat on highway trips. When Tesla updated the Autopilot software on Jan. 10, it also added new safety restrictions, such as topping off speeds at 5 mph over the posted limit on undivided roads and in residential areas.

This freewheeling approach is what has made Tesla the favored brand of technologists. Sebastian Thrun, the former co-creator of Google's self-driving car program, drives a Tesla. He told me he enjoys Autopilot when I caught up with him in San Francisco last fall. But, he said, clearly Autopilot is a work in progress.

"It's a beautiful feature," Thrun said. "I love it. It's just not quite as good as the Google feature."

But at least Tesla's you can drive today - and drive it almost anywhere.

That comes from the 12 ultrasonic sensors circling the Tesla Model S P90D, plus a front-facing radar and a camera mounted by the rearview mirror. These are the driver's substitute. They allow the car to automatically follow traffic and avoid accidents, stay in its lane, even change lanes. The Tesla also can park itself in parallel or perpendicular parking spaces, in addition to the Summon feature.

Engaging Autopilot requires a double tug on a lever on the left of the steering column. If conditions are right and you're driving 18 to 90 mph (or less in tight traffic), a steering wheel icon in the center cluster turns blue.

Now, the car is driving itself.

The first several times I did this, it felt like a trust-building exercise, where you fall backward, eyes closed, and expect other people to catch you. Would Autopilot really catch me every time?

A screen in the center cluster glowed with an animated image of the Tesla. It showed radar bursts to indicate the sensors detecting cars or bicyclists around me. It showed blue lane markings if that's how Autopilot was navigating the road. And it showed the car in front of me as a blue icon if Autopilot was locked onto it.

It was fascinating watching the display, seeing what Autopilot saw. One consistent problem for driverless cars are poorly striped roads. Faded lane markings made it hard to "see." Even passing by highway exits can lead to confusion - should the car follow the exit or the main highway? Tesla improved this feature with its latest software update.

At times, the Tesla seemed to lack confidence as it steered, wandering within the lane to find its boundaries. You could almost sense its baby computer brain trying to figure it out. It never strayed, even when lane markings disappeared, but it did make for some uncomfortable moments. It felt most assured of its path when it had both lane markings and a car to follow.

I could take my hands off the wheel for long stretches and just a slight tug on the wheel was all it needed to know I was paying attention.

The two times the "take control" alarm did sound came on highway exit ramps. The Tesla handled these ramps perfectly several other times. I don't know what went wrong. If I hadn't taken over steering, the car would have automatically slowed itself to a stop. But I was able to easily handle each incident and never felt in danger.

The biggest challenge driving the Tesla was remembering what Autopilot can and cannot do.

Yes, it can follow traffic and handle almost any situation - except for Washington's many traffic circles, which consistently threw it for a loop (to be fair, that's true of many human drivers, too). But Autopilot doesn't obey stop signs or traffic lights. The camera can read speed limit signs, so presumably reading stop signs is just a software update waiting to happen.

But several times I had to stop the car blowing through a red light.

Autopilot also highlighted just how stubbornly rules-based driverless cars will be. They don't pass pokey drivers. They don't speed up to make a traffic light. They allow anyone to merge into your lane, no matter how infuriating. They are calm. They are perfectly rational. They follow the rules. They are not like human drivers at all.

That can be a good thing. The Tesla in Autopilot didn't react to the Jeep Wrangler that twice cut me off, swerving back and forth to gain a few extra feet in traffic.

I grew more comfortable with Autopilot as I drove. Eventually, each braking opportunity became less of a lump-in-the-throat experience. But trust will be a major problem for the adoption of driverless cars. But that was once was true of online banking, too. And that sounds antiqued today.

The last night I drove the Tesla, it was snowing. An inch was already on the streets. The Tesla handled perfectly, even as other vehicles spun out. But the falling precipitation confused the Tesla Autopilot's many brilliant sensors. They kept warning me of impending collisions - when the only thing close enough to cause worry were snowflakes. The snow-covered streets blinded its ability to see. I was stuck in an epic traffic snarl on city streets, where moving at 5 mph felt like a victory. It would've been the perfect time to allow a computer to do the driving for me, to sit back, maybe watch something on Netflix or scan Twitter. Anything but drive.

At that moment, the driverless future felt very far away.

I was on my own. It was up to me to drive the car.