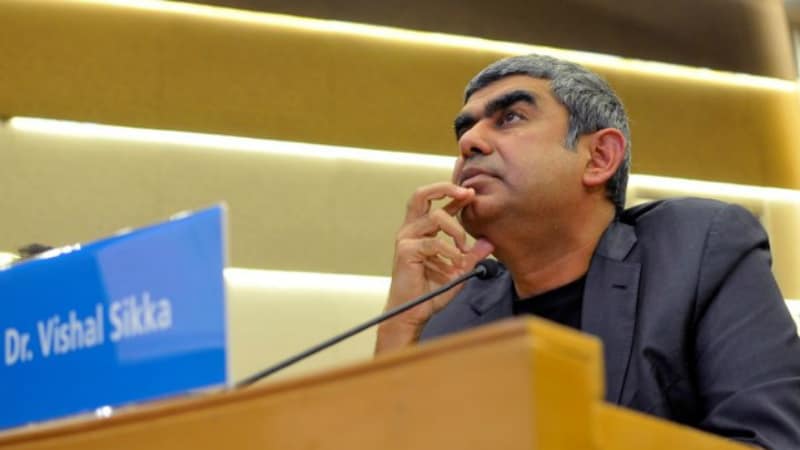 Vishal Sikka, the former SAP Chief Technology Officer who joined Infosys as its first non-founder Chief Executive Officer in June 2014, is in the eye of a storm right now. Infosys has long held on to the philosophy of ‘compassionate capitalism’, and recommends that the ratio between the highest salary paid by the company to any executive, and the company’s median salary, should be 50 to 60. However, Vishal Sikka’s new salary has seemingly crossed that ratio after a reported 55 percent hike in his compensation, which now stands at $11 million (approximately Rs. 73.4 crores). This has rankled the co-founders of the company, who are said to have questioned board members’ support for this salary hike.

According to the Infosys’s Q4 2016 regulatory filing, Vishal Sikka’s salary had been revised to:

This salary structure will result in Vishal Sikka taking home a salary of $11 million in FY17. However, the fine print shows that if he is unable to meet the board’s targets, he will only earn $3 million (approximately Rs. 20 crores) from Infosys ($1 million in base pay and $2 million in time-based RSUs, which cannot be cashed in immediately).

On the other hand, if he is able to exceed the targets, Vishal Sikka’s total compensation for 2016 will go higher, as the performance-based variable pay and equity will be more (capped at 150 percent of the respective compensation recommendation). Namely, this would mean that Vishal Sikka would get up to $4.5 million in variable pay (instead of $3 million) and up to $7.5 million in equity and stock options (rather than $5 million) if Infosys exceeds the targets under his leadership.

More worrisome for Infosys co-founders, including NR Narayana Murthy, is the fact that the Infosys board in the last three months has recommended a higher variable pay component for the chief executive, according to a report by Mint. It further says that Infosys non-executive chairman R. Seshasayee has recommended a flexible implementation of the variable pay clause in the salary structure considering the volatility in the Indian software services industry right now.

Mint’s reports that senior Infosys executives (Associate Vice President and above) will get only 30 percent of their respective variable pay because of the market conditions. Therefore, enforcing the variable pay and equity clauses in Vishal Sikka’s salary structure would mean that he gets $5.4 million (roughly Rs. 36 crores), less than half of the $11 million he can take home for meeting the targets. The $5.4 million salary would also mean that Vishal Sikka would make less in FY17 than he did in the previous financial year ($7.08 million or approximately Rs. 48.73 crores).

However, Vishal Sikka is the highest-paid chief executive among software services firms in India, that too by a huge margin. According to data compiled by Business Standard based on FY16 salaries, former TCS CEO N. Chandrasekaran was a distant second to Vishal Sikka, with the former making Rs. 25.66 crores and the latter Rs. 48.73 crores.