Sunil Kumar, a 29-year-old Delhi resident, received a letter from his employer Fareportal in the middle of the night, informing him that he has been laid off. About 500 employees at the travel tech firm have been given the pink slip during the unprecedented coronavirus lockdown. Apart from Fareportal, tech companies like Meesho, Oyo, MakeMyTrip, GoIbibo, and many more have also trimmed their staff or announced furloughs. In the wake of this pandemic, many employees face the risk of being unemployed as businesses continue to remain shut for the third week. Affected employees have been posting on social media, asking the government to intervene.

According to a report based on National Sample Survey (NSS) and Periodic Labour Force Surveys (PLFS) data, over 136 million jobs are at immediate risk globally. Gadgets 360 reviewed crowdsourced data collected by Big.Jobs from over 776 companies around the world, showing that most layoffs are coming from VC-backed tech startups and bootstrapped companies. Medium-level companies with between 200 and 500 employees are at highest risk of layoffs and salary cuts. Furthermore, companies falling in age 5-15 years have a higher risk than others, even more than the startups (age 0-1 years), as these may be hiring on a large scale to look for the faster growth at this age.

Confederation of Indian Industry (CII) said that the government should look at a stimulus package that will support enterprises, especially MSMEs, to avert mass-scale closure of businesses and loss of jobs. FICCI said that ‘India cannot afford a prolonged lockdown', and urged the government to come up with a calibrated "exit strategy" that aims towards bringing about a fine balance between normalising economic and social activity and taking measures to contain COVID-19.

Oyo has reportedly furloughed thousands of its staff to mitigate pandemic woes and lack of revenue. Indian social commerce startup Meesho is reported to have laid off over 200 employees in a bid to cut costs. The company is also looking to slash salaries from next month, and senior executives are expected to see severe pay cuts.

Big.Job's data suggests that the travel and transportation sector is one of the worst hit sectors, with over 62 percent companies resorting to layoffs and salary cuts. MakeMyTrip, GoIbibo, and RedBus have announced salary cuts across senior and managerial levels. MMT is reported to have plans to fire over 60 percent of its headcount that is not on its payroll. Even online travel agency TravelTriangle has reportedly terminated about 50 percent of its workforce in just 10 days. Over 250-300 people have been asked to leave since March 20.

About 120 people were given the pink slip at Bangalore-based scooter rental startup Bounce – most of them in the mid-level to senior level positions, while insurance startup Acko reportedly let go of 45 to 50 employees.

The situation in the IT sector is especially grave, with Centre of Indian Trade Unions' (CITU) General Secretary Tapan Sen even writing to the Union Ministry of Labour, regarding over 496 employees terminated from tech companies in Bengaluru. In his fifth letter to the ministry, he urged the authorities to take action against employers. Over 1.5 lakh people in IT firms are expected to lose their jobs in the coming months.

One of the worst hit so far seems to be Fareportal, whose employees claimed online that over 500 people have been laid off, with termination letters coming in at 3am in the night. Employees have been venting their anger on Twitter and asking for government intervention.

Kumar, who used to work at Fareportal, told Gadgets 360, “During the pandemic situation they have terminated more than 500+ employees without any prior notice. We received the termination letter overnight on our email. Most of the employees have home loan and they have responsibility of 3-4 family members and many of us living on rent. We don't have any source of income, and as per current situation of the market, we will not get job easily. We cannot understand how we will survive in this metro city. We are helpless now.”

Mahesh Vyas, Managing Director and CEO of Centre for Monitoring Indian Economy (CMIE), noted that things could get much worse as we move into the lockdown period. His latest report suggests that unemployment rate has spiked to 23 percent post lockdown – a huge increase from 7.2 percent in January. In its latest findings, CMIE has discovered that between January and March, the number of unemployed increased from 32 million to 38 million.

While the situation has been grim already, the extension of lockdown is going to deepen the unemployment rate further.

Reiterating the same sentiment, Anandorup Ghose, Senior Director, Deloitte India told Gadgets 360 that the impact will deepen depending upon the duration of the lockdown. “The impact on organised sector jobs will be contingent to the duration of the lockdown and the time it will take for the economy to get back to the pre COVID levels. The government mandate to not retrench employees will act as a good deterrent for organisations from doing mass scale redundancies immediately – however, over the next few quarters, this might get more challenging,” he said.

The Ministry of Labour and Employment has issued an advisory urging companies to not let go of employees or cut their salaries. The advisory noted: “The termination of employees from the job, or reduction in wages in this scenario would further deepen the crises and will not only weaken the financial condition of the employee but also hamper their morale to combat their fight with this epidemic.”

Himanshu Geed, CEO and co-founder at Big.jobs told Gadgets 360, “While layoffs will reduce immediate costs, it could harm a company's interests in the longer term." He advised companies to consider various scenarios around how long this crisis would last for their business and how cashflows are likely to get affected before resorting to layoffs and salary cuts. He suggested other alternatives, like reducing the cash-component of the salary and compensating it with stock options, offering employees a share in revenues or profits while the company is in stress, and reducing number of hours or temporarily sending employees on sabbaticals or leave-without-pay. Another way to keep employees motivated would be through non-monetary benefits such as promotions, bigger titles, and better flexibility. 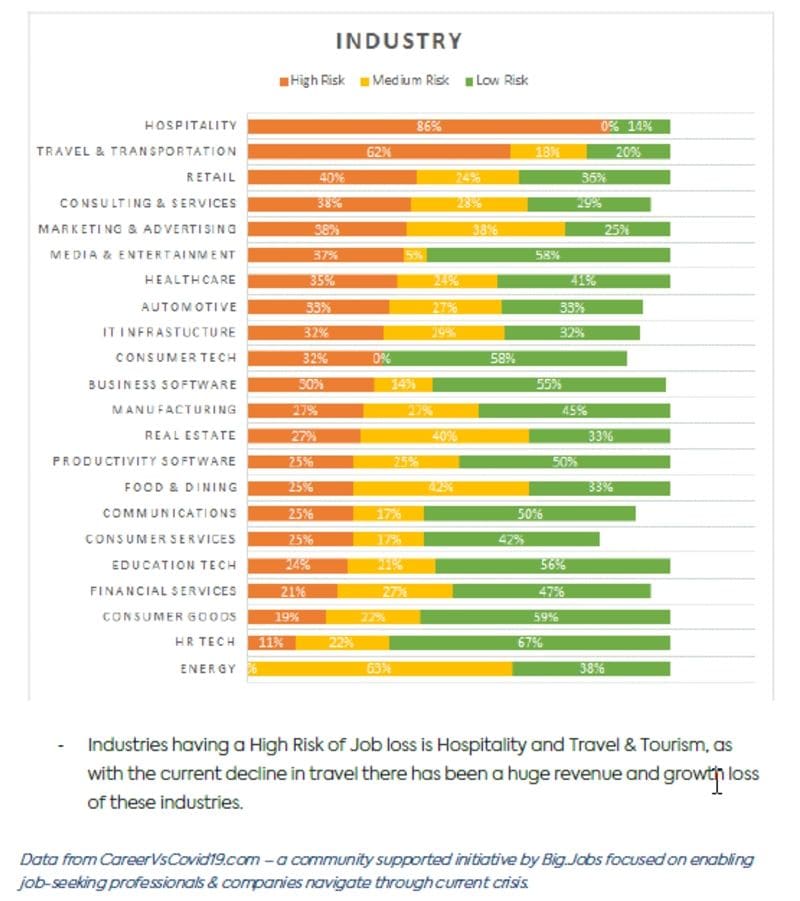 One big factor to consider is that while unemployment may rise during COVID-19, the number of companies looking to absorb new staff will be particularly less in the immediate future. Ghose, of Deloitte India, explained, “Hiring numbers are expected to remain very low and most hiring activity will be in sectors that are being classified as ‘essential services'. A large section of companies we have spoken to have implemented a freeze on all hiring for the next quarter at least.”

However, he is optimistic about the tech sector's capabilities to rebound. “Technology product companies may not see much of an impact anyway. Given people costs form a very large part of total expenses for these companies it is only natural that some companies may feel the need to optimize on those costs in the next two quarters. The important thing to remember about this industry is that, like financial services, they have seen two significant downturns in the last two decades – both may have temporarily affected the industry, but it has rebounded significantly as the world gets progressively more digital.”