This Made-in-India Bowling Machine Can Hit 130kph Without Electricity

You can use real cricket balls with Freebowler

As you would expect, a lot of the work in hong one's cricket skills is done on practice pitches in the nets. To actually be able to improve, every batsman either needs a skilled bowler to bowl at them or a bowling machine.

There is a big difference between a bowler and a bowling machine. A bowler will keep bowling different deliveries, vary the point and pace of delivery, and use a real cricket ball so the batsman can practice. Electric bowling machines, on the other hand, can't be moved around much, and can't use real cricket balls. They use a dimpled polyurethane ball that looks like a slightly large golf ball, which players say doesn't behave like a real cricket ball. It's great at bowling a consistent length so you can work on specific weaknesses, but it isn't ideal to simulate a match situation.

Freebowler, which is currently a self-funded company, wants to bridge this gap with its bowling machine. It looks like a metal contraption that belongs on the sets of a medieval fantasy film, but when it bowls, batsmen we spoke to said they found it much harder to face than electric bowling machines. They also said they got to practice with a real cricket ball, which adds a lot to their training. Gadgets 360 had the chance to speak with two professional cricketers who practiced batting against the Freebowler, which is manufactured in Bengaluru, at a ground in Mumbai's Kandivali suburb. Sagar Mishra, a 24-year-old all-rounder who has played first-class cricket for Western Railway, said: “It was not like that bowling machine (electric) where the ball used to just come on bat. (Freebowler) was definitely like a bowler bowling in a match. There was a bit of seam movement and the length was unpredictable.”

Amogh Bhatkal, a 24-year-old an opening batsman for Nirlon Sports Club in Mumbai, echoed his thoughts. “It has a slingy action. It gives more like a bowler experience for a batsman to bat. Sometimes, the machine moved faster and the ball used to come slow,” he said.

Prateek Palanethra, the founder, says he came up with the concept in 2016 while he was doing his Master's degree in the US. Since cricket is not very popular in the US, Palanethra says he didn't have any easy way to practice batting. It started as a college project for him as he was trying to keep his batting skills sharp, and he couldn't find any cheap mechanical machine to help him practice batting. This prompted him to start making what is now the Freebowler.

Two years on, the first iteration of Palanethra's vision is ready. When assembled and armed for delivery, it's around 1.7m tall. To arm the Freebowler, you have to pull its sling down and lock it in position. Then, you push a metal plate down with your leg to lock it in place. Now you can place a ball on the plastic cup on the sling and signal to the batsman that you are ready to bowl. This signal is very important as the Freebowler's sling moves much faster than any bowler's arm. Then, you pull the trigger and “bowl” the delivery. Palanethra says he showed the machine to officials and players from Cricket Australia and they told him that the rotation of the Freebowler's arm is quicker than the arm rotation of a bowler. “Playing with this improves (a batsman's) reaction time. That's the feedback we got from Cricket Australia,” he said.

We reached out to Kieran McMillan, Head of Clubs, Competitions, and Diversity at Cricket Australia, who had a chance to check out Freebowler. Here's what he told Gadgets 360: “We had the opportunity to see the Freebowler in action and test the batting skills of one of our colleagues here at CA — fair to say that one of those was a bit rusty, and it wasn't the bowling machine! From an initial view, the product has promise and could offer a cost-effective and portable solution for grassroots clubs. We will watch with interest this season with some early adopter clubs as to how effective the Freebowler is for improving the experiences of players and making it easier for volunteers to deliver the game.”

By now, it is clear that the ability to introduce variations is another of Freebowler's features. You can place the ball with the seam in different positions to simulate different deliveries that bowlers bowl. There's a screw under the plastic cup on the sling, which can be tightened or loosened to adjust the length of the delivery. Similarly, the machine has three hooks, which let you vary the speed between 110 and 130 kmph.

“Wherever we have made them to bat in two-three different set of conditions, they have said (Freebowler) is very close to playing in the nets with a real ball,” Nagesh said. “We don't want the batsman to anticipate and be ready. The surprise element which the bowler creates, that should come in the machine. If I tell (a batsman) that I am going to bowl good-length for 100 balls, mentally he already is going to be prepared. Nobody is going to tell you that in a real match.” 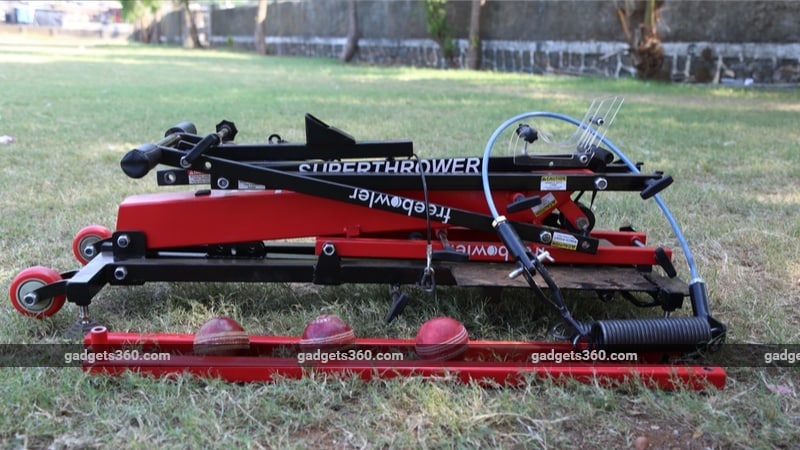 Having said that, the Freebowler is not without limitations. At the moment the Freebowler can mimic a short, medium pace bowler. The machine is not tall enough to simulate deliveries being bowled by a freakishly tall bowler such as Billy Stanlake.

“For professionals, we need to address the height issue. For junior players, up to under-19 this machine is perfectly fine,” Nagesh told Gadgets 360.

At the international level, 130kph is not a pace that will trouble any batsman. Freebowler can't hit 140-150kph, which is the speed most international team fast bowlers bowl at. The founder, Prateek Palanethra, said the company has had to walk a fine line between portability and speed. To integrate higher speeds, the Freebowler would need a heavier base, which makes the machine a lot less portable, he explained.

Finally, Freebowler is not a spinner yet. If you want to practice against spin, the machine won't be of much use right now. “We have tried a few prototypes but it is still at least six-eight months away. We wanted to get this product out first,” Palanethra said. He added that the company is also working on figuring out how to integrate a camera and some kind of sensors to give batsmen basic data such as how many deliveries they faced and how they played certain shots, etc.

The Freebowler also has components that will need to be replaced from time to time. The main component is the spring that gives the machine the power to bowl deliveries. Palanethra says, “The machine is completely modular. Even if a component breaks down or is damaged the maximum it'll cost to replace is around Rs. 1,300. The spring will cost around Rs. 1,200 to Rs. 1,300 and the plastic cup is at around Rs. 700 to Rs. 800.” 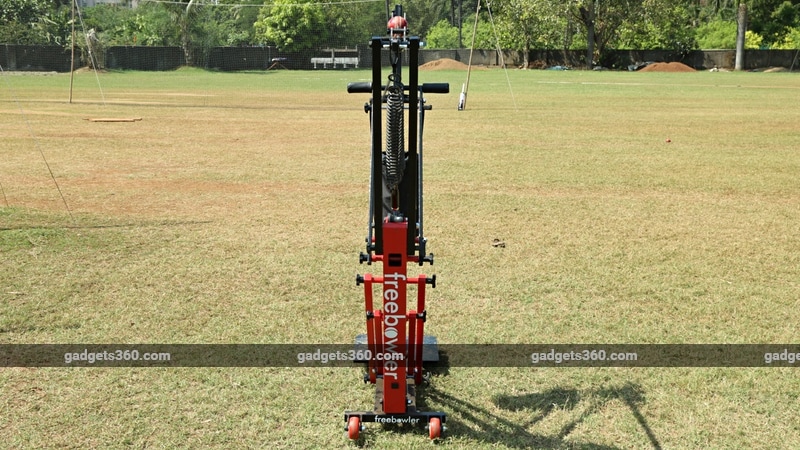 Freebowler is about as tall as an average Indian, but professional players would benefit if it could simulate taller bowlers as well

He adds that these components are built to last for 10,000 to 30,000 cycles depending on use. The act of arming the machine and bowling a delivery is one cycle. Palanethra told Gadgets 360 that with heavy use (four hours a day of nonstop use) these two components will last around two months. With normal use (two hours a day for up to five days a week), they'll last for six months or more.

You get all of this in a package that weighs around 27-30kg, and fits in a bag that's about the size of a standard cricket kit. The Freebowler is priced at Rs. 40,000, which is far lower than what most electric bowling machines cost. Freebowler is currently in discussions with multiple cricket academies across India and has around 100 pre-orders so far. The company also has a presence in international markets such as Australia and the US, and for now, its focus is on establishing a footprint in cricket academies across India.

Further reading: Freebowler, Cricket
Pranay Parab Email Pranay Pranay is in charge of podcasts and videos at Gadgets 360. Over the years, he has written over 500 tutorials on iPhone, Android, Windows, and Mac. He has also written in-depth reported features on the intersection of technology and culture, reviewed fitness wearables, been the social media manager, started two podcasts, and produced several tech videos. He loves travelling, particularly to places not frequented by tourists. He keeps running half-marathons across the country and hopes to complete ...More
Redmi Note 6 Pro India Launch: From Redmi Note to Redmi Note 6 Pro, A Look Back at the Redmi Note India Journey
Xiaomi Opens Over 500 Retail Stores in a Single Day in Rural India