Tesla Model 3 Pre-Orders Are Through the Roof. Here's What That Means for the Planet 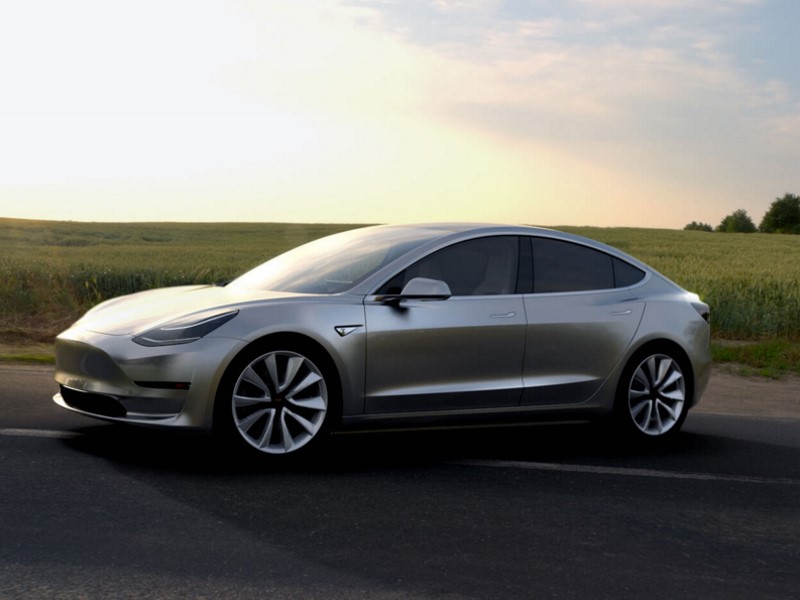 It's being hailed as simply extraordinary. Since introducing the Model 3 sedan - a far cheaper electric vehicle, aimed for broader consumption, than the Model S - Tesla saw a stunning 276,000 orders in just two days.

Tesla aims to sell 500,000 electric vehicles per year by 2020 - an ambitious goal but one that, based on these numbers, doesn't sound so unachievable. (That number presumably includes sales of all Tesla models, not just the new Model 3. Deliveries in 2015 were around 50,000 of all Tesla vehicles, according to Bloomberg New Energy Finance.)

Clearly, part of the appeal of the new vehicle is not just its sleekness or new range, but rather, its environmental promise and symbolism. One key question, though, is what this surge in Tesla sales means for a critical parameter that will determine the planet's future: By electrifying transportation (and thus, powering cars not with gasoline derived from oil, but rather, with an electricity supply that itself is getting greener), how fast can we start to bring down the United States', and the planet's, emissions?

Current transportation emissions, on a global scale, were 6.7 billion tons of carbon dioxide equivalents in 2010, or about 23 percent of all global greenhouse gas emissions related to the use of energy, according to the UN's Intergovernmental Panel on Climate Change. The number rises to 7 billion tons of carbon dioxide equivalents when other greenhouse gases are included. The majority of that was for road-based transportation, though the figure also includes shipping, aircraft, rail, and other sources. (In the United States, transportation makes up about 25 percent of emissions.)

Decarbonizing the transportation sector has long been regarded as a fairly difficult endeavor, since these are mobile rather than stationary sources of emissions, and since emissions from cars and other transportation sources are expected to grow so much in the future. Thus, the 7 billion tons in 2010 are projected to be 12 billion per year in 2050, barring major policy shifts.

Several experts this week said that booming Tesla sales don't make enough of a dent in transportation - at least not immediately - to shift this in a substantial way. The problem is that the global auto industry is massive, and even a half-million Tesla sales per year isn't all that much in that context.

"Even if Tesla manages to scale up and hit its very aggressive target of 500,000 vehicles a year by 2020, that would still represent only about .5 percent of global light-duty vehicle sales," said Colin McKerracher, head of advanced transport at Bloomberg New Energy Finance. "So it's hard to have an overall impact from them alone."

However, if what we're seeing marks a broader shift, in which Tesla ends up driving the rest of the auto industry to change and make more electric cars, that's another matter. "It's obviously important for Tesla, but I think it's going to push other automakers to match what Tesla's doing, and also get other people to think about switching to electric," said David Reichmuth, a senior engineer in the clean vehicles program at the Union of Concerned Scientists.

Margo Oge, former director of the EPA's Office of Transportation and Air Quality and author of the book "Driving the Future: Combating Climate Change with Cleaner, Smarter Cars," concurred. "What it's doing is bringing the cost down on the battery, making it affordable, putting pressure on other companies," said Oge of Tesla's success. These are important impacts, even if there still may not be enough electric vehicles on the road to cut down emissions a lot - at least not immediately.

To see why it's so hard to quickly move the needle in this arena, just consider some numbers. Currently, light-duty vehicles sold around the world annually number (get ready to gasp) 88.5 million in 2015, according to Navigant Research. And they're expected to grow, and grow, and grow.

Out of that annual total, according to the US Department of Energy, there were some 565,000 sales of plug-in light electric vehicles in 2015. So you see the small percentages that we're dealing with (even though sales are also rising quite rapidly).

Current forecasts expect electric vehicles to become more prominent in the mix, but few expect any sort of really rapid transition. Bloomberg New Energy Finance, for instance, thinks electric vehicles sales will be less than 5 percent of total vehicle sales globally until about 2022, when battery technology becomes cheap enough to really, really compete. This means that it's around 2040 that the numbers really get impressive - in that year, 35 percent of new cars sold could be EVs, the group thinks, and they could comprise about 25 percent of the global auto fleet.

"Battery cost has come down 70 percent the last four to five years," said Oge. "Now it's $145 per kilowatt hour, it's been reduced 70 percent, and by 2022, we're talking about $100 or $120 per kilowatt hour. And all the experts are telling us that at that level of battery cost, electric cars are going to be at cost parity with the combustion engine."

When it comes to how fast electric cars can drive down emissions, a key issue is exactly what kind of electricity they're getting - which fossil fuels are being burned to power them, or, whether they'll be charged using a mix of electricity that is heavily sourced from renewables. "By and large, EVs still compare favorably in all but the most dirty grids. But the grid gets cleaner over time," said McKerracher.

Thus, the growth of clean electricity and the reduction of vehicle emissions turn out to be closely linked. EVs are also, according to the Department of Energy, already a lot cheaper to operate in most places, even with the very low gas prices out there now. As of April 2, the average price of gas in the United States was $2.07, but an "electric eGallon" was $1.09, the agency said.

Other factors that could reduce vehicle emissions in the future include the automation of cars and more ride sharing, and also global city planning - design decisions can have a big impact on how many people opt for cars in the first place, and how much they think they need to drive them.

The upshot therefore remains that given the massive scale of the emissions problem in the transportation sector alone, Tesla can't change the world fast or on its own. But then, it probably won't be alone. "Tesla also puts pressure on traditional car manufacturers to invest" in electric vehicles, said Oge, "something [it was] not doing seriously few years ago."

Thus, much like what's already happened with wind and solar, it looks like we're at the beginning of a major boom in electric vehicles. But just like with wind and solar, these vehicles are starting out as a very small percentage of the total global fleet. They can therefore enjoy very rapid growth, but that's not the same as rapidly fixing our carbon problem.