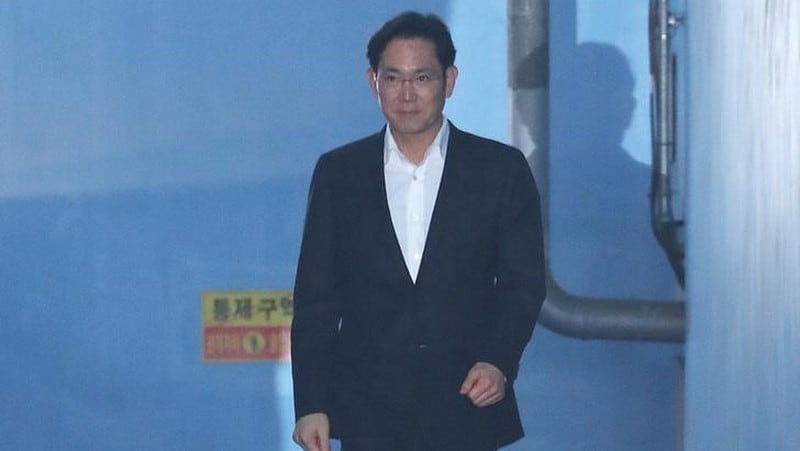 Samsung Group heir Jay Y. Lee's release from jail on bribery charges has some in South Korea hoping for new investments and jobs from the massive conglomerate, despite ongoing concerns over the cosy ties between government and business leaders.

Dubbed the "Republic of Samsung," the company's businesses reach deep into many parts of South Koreans' lives, and are intertwined with thousands of small and medium-sized subcontractors and start-ups.

After a year in detention, the heir to South Korea's largest business empire walked free on Monday as an appeals court suspended his jail term for bribery in a corruption scandal that toppled the former president last year.

Many South Koreans in the business community welcomed Lee's release and anticipated the national economy would feel positive effects from his comeback, including new investment in local industries and more domestic jobs.

That could help ease a backlash from other South Koreans upset over the cosy ties between politicians and the powerful family-run conglomerates, or chaebols, which have been implicated in a series of corruption scandals in recent decades, several business lobby groups and corporate analysts told Reuters.

"Parts of our community feel Lee's suspended jail sentence is against the people's will, but if he continued to stay in jail, it would have been a burden not just to Samsung but to all its countless subcontractors here," said Kim Kyung-man, head of economic policy for the Korea Federation of SMEs, a lobby group for small and mid-sized firms.

"One good thing about having the owner of the conglomerate back is he can make decisions quickly. We are looking forward to any action to boost the economy by Samsung, our global brand, which also can help calm public ire," he said.

Past investments
Samsung investors said Lee may follow the model of other suspended or jailed chaebol leaders who made bold moves for their companies once reinstated.

Since food-to-entertainment CJ Group's chairman returned in May 2017 after being pardoned for tax evasion and breach of trust, the company has carried out a slew of acquisitions and investments.

The increased investment since Lee Jay-hyun rejoined management likely boosted employment at CJ Group last year, a company official said, but detailed numbers have not yet been compiled for 2017.

Energy-to-semiconductor producer SK Group, South Korea's third-largest conglomerate, has been on a growing investment spree since 2015, when Chairman Chey Tae-won was granted a presidential pardon over his conviction for embezzlement.

Samsung has some history of its own.

Lee's father was convicted of tax evasion in 2009, and had a three-year sentence suspended, with judges citing his "contribution to the country's economic development" and his "patriotism through business enterprise from job creation".

The elder Lee was later pardoned, allowing him to lead the campaign to secure the 2018 Winter Olympics for South Korea.

"Whenever a major chaebol leader has been released from jail, they have tended to increase social contribution," said Park Ju-gun, head of research firm CEO Score. "Samsung also could become active in supporting public works such as the current administration's drive to increase jobs."

Setback for moon
The suspension of Lee's sentence represents a setback for South Korean President Moon Jae-in, however, who was elected in May on a platform of getting tough with conglomerates and ending the practice of pardoning corporate tycoons convicted of white-collar crime.

It may also be difficult for Lee and Samsung to make any high-profile moves just yet, legal experts and corporate analysts say. The Supreme Court is expected to make a final ruling on his guilt or innocence.

"South Korean trial proceedings take into account the after-the-fact attitude of the defendant when sentencing, like whether the defendant is regretful, has made restitutions, and is living conscientiously since," said Rha Seung-chul, a lawyer specializing in corporate law.

"Lee will be very careful in how his actions are perceived."

Samsung, a symbol of the country's dramatic rise from poverty following the 1950-53 Korean War, has long been revered for helping catapult the country into a global economic powerhouse, with crown jewel Samsung Electronics alone accounting for about 20 percent of South Korea's total exports.

But frustration has grown that the wealth amassed by the largest conglomerates has not trickled down to average workers in Asia's fourth-largest economy.

Youth unemployment hit a record high of 9.9 percent in 2017, while one-third of workers were in temporary jobs paid less then regular positions, according to latest data from Statistics Korea.

"It is true that in South Korea there's two big different public perceptions towards the Samsung family. Dislikes versus hopes," a fund manager that invests in Samsung Electronics shares said.