Most exciting gadgets of CES 2014: From 3D printers to driverless cars

Wearable devices in the shape of smartwatches and head-mounted displays have been a staple of the show for a long time, but manufacturers were excited this year because the field is finally gaining traction with consumers. Fitness bands were a breakout hit last year. The 3D printing section bustled with activity, and it was clear that even though most people won't be buying a printer any time soon, they may be enjoying 3D printed products, such as jewellery, wedding cakes and dental braces, in the near future. Meanwhile, TV makers were heartened by the support they received for their new ultra-high-definition TV sets.

Here are some of the most notable products and services revealed at the show:

Driverless cars
The state of the art in car electronics is in systems that eliminate or ease the task of driving. French company Induct demonstrated its Navia driverless shuttle, which putts along at 12.5 miles (20 kilometres) per hour on a pre-programmed route. It's intended for university campuses, airports and other locales with enclosed roads. 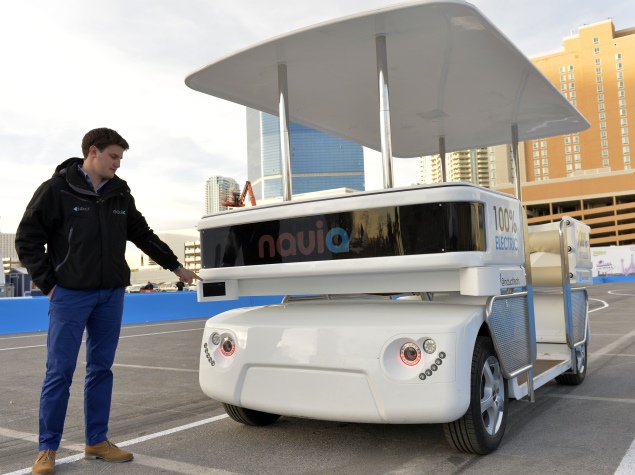 What about road safety? When a staffer walked slowly in front of the Navia, the vehicle slowed down, rather than coming to a full stop, because it recognized that the pedestrian ahead was moving, too.

Then there was Audi's automated parking demonstration. With a press of a button on a smartphone app, the German automaker's computer-equipped car squeezed into a tight space between two other cars, a situation that would give many drivers pause. The car has multiple cameras and ultrasonic sensors, giving it a 360-degree view. It puts rubber-necking and looking through the side-view mirror to shame. The car executed a three-point turn flawlessly -and the driver didn't have to worry about dinging other cars' doors, because he had already exited the car. 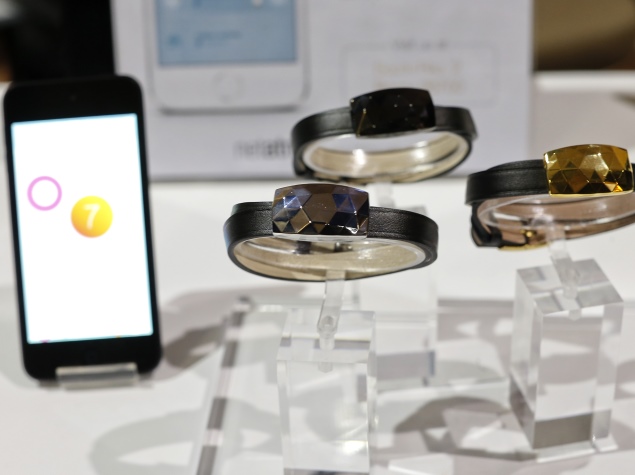 The wearable computing trend has unleashed a lot of creativity. One example is a wristband with a "gemstone" that measures exposure to ultraviolet light, the kind that causes tanning and skin cancers. Using Bluetooth wireless technology, the Netatmo June sends readings to the owners' smartphones, warning, for instance, when they're approaching their daily limit of UV exposure. The battery lasts for six weeks. Netatmo, a French company, hopes to sell the device in the U.S. for $99, starting in the second quarter of this year. 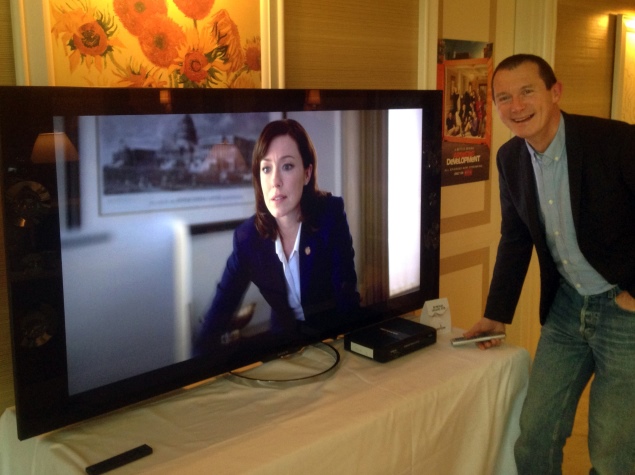 Netflix demonstrated ultra-high-definition, or 4K, video streaming. The company will offer relatively easy access to shows that take full advantage of the 4K TVs set to go on sale later this year. (The 4K TVs on the market today don't have the chips necessary to decode the picture.) Netflix's 4K content will stream at 15.6 megabits per second, so viewers will need a relatively fast Internet connection. 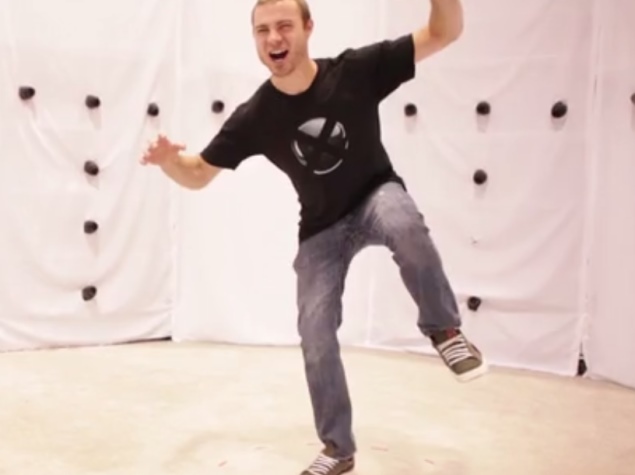 At the Nikon exhibit, Los Angeles-based photographer Alexx Henry set up a small tent with 68 inward-facing, off-the-shelf Nikon cameras. When a subject steps inside the xxArray photo booth, an operator triggers the cameras simultaneously, yielding an image of the subject from all angles. Computers then process the images and create a 3D rendition of the subject, which can then be posed in the computer as if it were an action figure. The 3D model can also be imported into a game. So instead of playing with a generic game avatar, you may someday see yourself running around, blasting bad guys.

Industry-watchers expect setups like the xxArray to become more common and coupled to 3D printers. In a few years, when you go to a photo studio, you might come home with a statue of yourself. 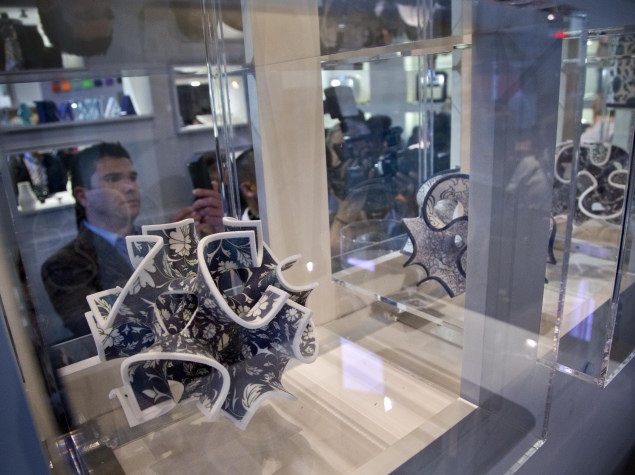 A company called 3D Systems showed off the ChefJet, the first restaurant-approved food printer. The device uses water to melt sugar into shapes as complicated as the mind can imagine. The company's booth featured a wedding cake held up by an edible lattice-work tower that would have been nearly impossible to create by other means. The ChefJet can print complex works in chocolate, too. Unfortunately, the samples the company handed out didn't taste very good, but party planners and restaurateurs will likely be excited about the possibilities culinary 3D printing opens up. 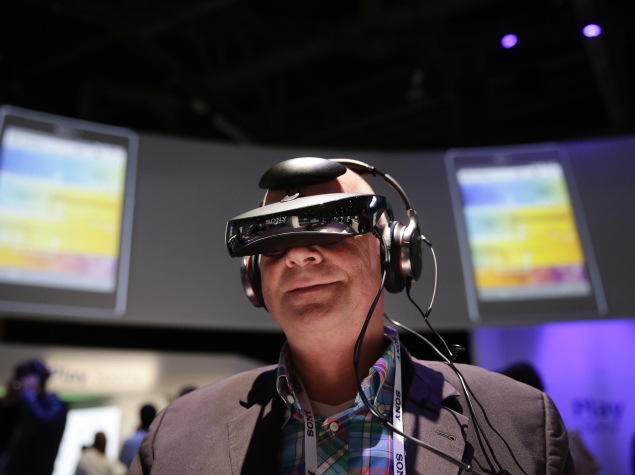 Sony's head-mounted display looks like an enormous pair of glasses. When you strap it on, you take on the perspective of a motorcycle driver racing through the English countryside. Looking down shows the pavement speeding by, looking up shows the clouds. When you swivel your head to the right or left, you may feel like waving to the crowds along the road. All this is enabled by a sensor attached to a strap that tracks your head movements and adjusts the wide-angle picture accordingly.

Although there were a few kinks that marred the illusion, the demonstration gave a taste of what's possible when "wearable" displays and computers combine with movement sensors. 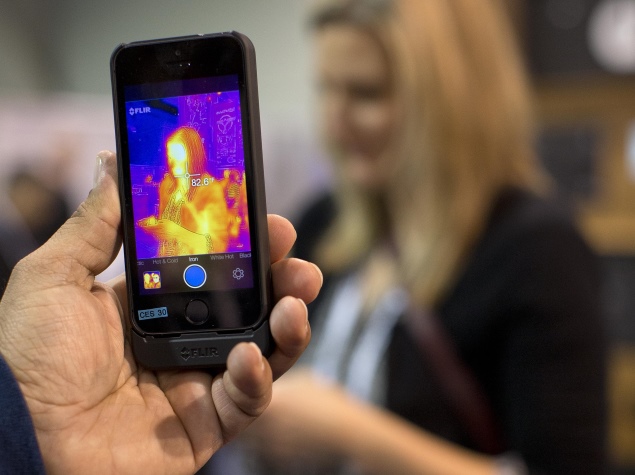 FLIR Systems Inc., the leading maker of professional imagers that "see" heat, is bringing out its first consumer-level product: a jacket for the iPhone that contains a heat camera. Temperature differences show up in different colors on the screen of the phone. For instance, you can set it to show hotter things in yellow, medium-hot in red and cold in purple. It can discern temperature differences as small as one tenth of a degree. The FLIR One will cost $349, which compares with $995 and up for FLIR's professional thermal imagers. Practical applications for the camera include identifying leaky insulation and moisture. Fun applications include spotting wildlife, high-tech hide-and-seek, and crazy party pictures. ("Everyone was so hot!")

(Also see: The $349 FLIR One case turns your iPhone into a thermal camera)

In this very high-tech update to Scalextric slot racers, your iPhone doubles as a controller for cars that zip around on a track painted with an infrared pattern the cars see with small cameras on their undersides.

Somehow, the cars fly around without rails, unless you do something really crazy. You can shoot imaginary weapons with rapid-fire tapping on your screen, disabling cars in front of you so you can race ahead. For kids, the game is a mind-blower that could inspire them to create their own gadgets, the way Erector Sets once did.

Most exciting gadgets of CES 2014: From 3D printers to driverless cars
Comment