While the idea of 3D printing has been around for a long time, it's something that's still not well understood by most people. That's because the technology has so far remained too expensive to see extensive deployment, and there are still issues that keep it from going mainstream for manufacturing. Those issues aside, if you are reading this, chances are you have at least heard about 3D printing. However, you might be less familiar with the concept of 5D printing.

Now, unlike 3D printing, 5D printing isn't taking place in five dimensions - which is a relief since we're still stuck at three. Instead, 5D printing can be better called 5-axis printing, where there are five distinct axes along which the printer head moves. This allows for far more complex structures to be printed, while also enabling much stronger construction.

How Does 3D Printing Work, and What Are Its Different Technologies?

Bengaluru-based Ethereal Machines has been selling 3-axis machines to businesses for a couple of years, and then it got the idea of making a 5D printer, and has spent more than a year developing the concept. Along the way, the company thought of making a machine that combines additive and subtractive printing techniques, and the result, the Ethereal Halo, was just named amongst the Best of Innovations: 3D Printing ahead of CES 2018.

Gadgets 360 caught up with Kaushik Mudda, one of the founders of Ethereal Machines, to learn more about 5D printing, and the Ethereal Halo. You can see it in action in the video below to get an idea of what it's capable of as well, and read on to know more.

As you can see from the video above, the design allows creators a lot of additional flexibility when making 3D printed objects. This is actually the first such machine that the company has built, and it was a big challenge at first.

"All our earlier products were 3-axis machines," says Mudda. "After building a sustainable business we wanted to up the ante to make a desktop scale 5-axis CNC machine. The existing ones were all really huge, and really costly, so we thought this was a good challenge."

"And we didn't realise that a bunch of mechanical engineers like us wouldn't suffice, so we had to bring in designers, electrical engineers, coders, and so on," Mudda continues. "But then we had the idea of let's delve into additive manufacturing. So once we had the 5-axis CNC, from mechanical engineering to the proprietary code that's require to print with it, we just started toying with the idea of 'what will happen if I move an additive head onto this machine?' and from there we got to the Halo."

In a typical 3D printer, the head moves from layer to layer, depositing a thin amount of extruded plastic, essentially breaking your object into flat slices and then printing those - this means that designs can be severely constrained. But as you can see from the video above, with 5-axis movement, the printer bed is moving and so the head is coming in at very different angles, enabling a completely new kind of printing.

"[With conventional 3D printing] plastic gets melted and deposited layer by layer," explains Mudda. "But they're just stacked, so if you put enough force on the Z-axis it's going to break. That's the biggest disadvantage of FDM printed, that's why the importance of 5-axis. So imagine something like a concave shaped cap - it's impossible to make with a regular 3D printer, because you'd need to build a lot of filler, and supports. But with a 5-axis since the bed itself is moving, it gives me the freedom to print however I want, [make] that kind of structure. Or a cylinder with fan blades, how do you do that with a regular 3D printer?" 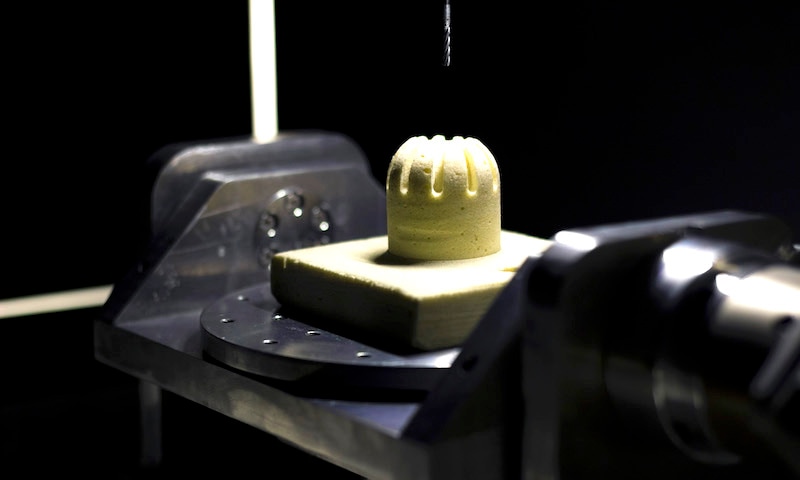 By bringing together subtractive and additive printing in a single machine, there's even more added flexibility that the device has, allowing for more complicated products to be made entirely through 3D printing. "So, let's take the case of a wearable electronics device," Mudda says, explaining how it works. "You need an outer case, the PCB has to be etched, smaller mechanical objects. Now, the most obvious method is, I'll make a small mould in my 5-axis, then send it to the plastic injection guy, who will make the parts, and then I have my watch."

"If I want to do it faster, I will 3D print my case, or cut it out of metal, you can do both in the Halo, and the strap can be printed with flexible filaments, and then for your electronic chip, I take the PCB, I etch it out in this machine, and for the routing of the electricity I can print a conducting filament all in the same machine which is available in the market."

"Now let's look at another example. So there is a housing where I need a lightweight part, so I can't machine out aluminium or anything because I need it to be light," he continues. "I can 3D print an entire block or housing in the shape I wanted, and then I used my subtractive method to install a turbine, a fan duct, or anything you want to install in the housing. It can dramatically cut the cost and time involved in making prototypes. The same thing wouldn't be possible with a 3-axis with a lot more time, without shaves, in-fills, or support structures that are then destroyed, creating a lot of waste and cost."

How 3D Printers Are Revolutionising Dentistry in India

Mudda adds that the team hadn't really been expecting much from CES, but entered the name as they hadn't come across something similar. Much to Mudda's surprise, it's ended up winning best of innovation, something he didn't see coming. "We thought it would be very difficult, and it has been difficult, but we thought it would take a lot more time than it took us to make this," he adds. Along the way, the recognition also brought in some additional attention. 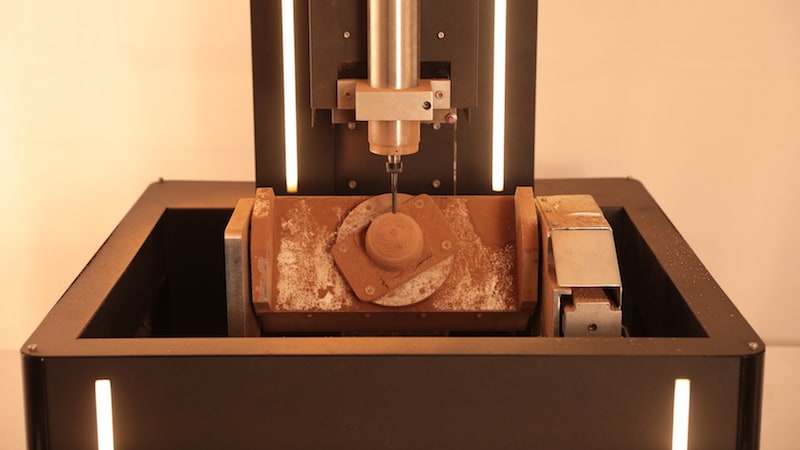 "University of Sheffield got in touch with us where Dr. Simon Hayes, who works on material sciences, will make use of this machine for the aerospace and aviation sector," says Mudda. "You have to have light parts but they have to be super-strong. So most of the parts are carbon fibre parts, but they aren't able to do smaller parts. If they want to make small parts under a couple of inches, it's not possible, so we just signed a contract with the University of Sheffield, where the students will use the Halo under the supervision of Dr. Hayes."

That wasn't all, as Ethereal Machines also had to gear up for the Global Entrepreneurship Summit taking place in Hyderabad this month. Mudda says that the team is working late to make everything so that its showing at the GES is a success.

Along the way, he's hoping that the success of Ethereal Machines can also help inspire others to start up, and make in India. However, Mudda says that the ecosystem is not very supportive of ideas outside of software even today. "The ecosystem has cleaned up a little now but two years ago it was all just apps," he says. "I don't have a problem with that [app companies getting funding] but I've seen juniors who had really good ideas but just because it wasn't rooted in a virtual platform or information science, these guys would just ditch the thought because they worried that there was no support."

"I have seen so many people getting demotivated like this," he continues. "We were lucky that we had a good amount of setup and support from the people around us, but not everyone has that and if the ecosystem keeps pushing towards software, then how are we going to expect India to make anything."

Further reading: Ethereal Machines, 3D printer, 5D printer, 5 axis printing, Ethereal Halo
Gopal Sathe Email Gopal
Gopal Sathe is the Editor of Gadgets 360. He has covered technology for 15 years. He has written about data use and privacy, and its use in politics. He has also written extensively about the latest devices, video games, and startups in India. Write to gopal@ndtv.com or get in touch on Twitter through his handle @gopalsathe with tips. More
Xiaomi Smartphone Exchange Programme, Redmi 5A Rumours, Nokia 2 Price in India Revealed, and More News This Week
Apple Files Patent for Foldable iPhone