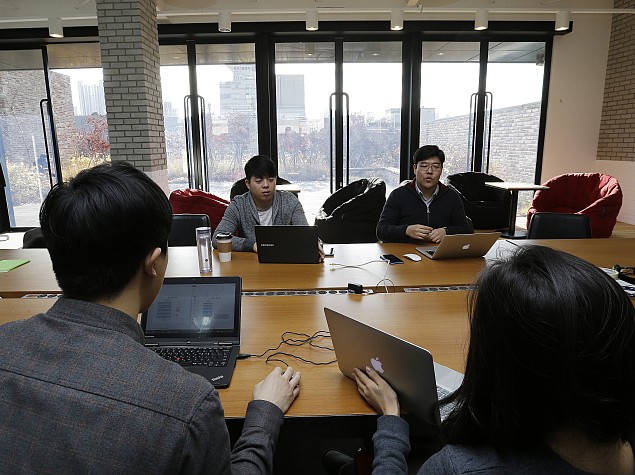 The uber-trendy Seoul neighborhood made famous by the "Gangnam Style" K-pop hit is known for status-conscious people, plastic surgery clinics and Ivy League prep schools. Now it's making a name as a bustling center for tech startups.

Many young South Koreans, some educated overseas, are going to Gangnam to start mobile or Internet businesses. Venture capitalists from Silicon Valley and Japan are opening offices in the area to find promising Korean services or apps to bet their money on. Hardly a day passes in Gangnam without a meeting or event related to startup businesses.

As one of the most wired places on earth, Seoul has been a crucible for several startup scenes. The government is even aiming to make a town south of Seoul a Korean Silicon Valley. But it is in the 40 square kilometers of land south of the Han river where the growth of Internet and mobile startups has been most evident and the related culture most vivid.

Despite its reputation as a beacon for the shallow and status-obsessed, Gangnam has a special significance in South Korea as the place where a globalized youth culture emerged from a generation that had opportunities to travel and study abroad. The present day Gangnam is still seen as the place that brings foreign culture and ideas to the rest of the country.

"Gangnam has the best of the New York city and Silicon Valley," said Steven Baek, a marketing director at FuturePlay, an incubator for startups.

Another common reason for startups going to Gangnam is that everyone else is there, which makes networking effortless.

Near Gangnam's Teheran-ro boulevard, many Gangnam startups, venture capitalists and startup incubators have opened offices in the past year, with more arriving in coming months. All three major media companies dedicated to covering startup stories are there too.

Around 2000, South Korea's first wave of Internet companies dotted this 4-kilometer-long street. After the dot.com bubble burst, most of the big Internet portals and online game firms that survived moved to the south of Seoul, but left a legacy. Engineers and developers live near or in Gangnam and older entrepreneurs from the dot.com era became angel investors and startup mentors such as FuturePlay's CEO Ryu Jung-hee.

Recent openings of two spaces for startups accelerated the startup boom and revived the Internet scene on Teheran-ro.

D.Camp opened in 2013 and Maru180 earlier this year a few blocks from Teheran-ro to rent cheap spaces to startup companies and investors. These Silicon Valley-style communal work spaces regularly host meet-ups. Maru even has showers and bunk beds. The spaces are designed to enable serendipitous, accidental meetings in communal areas.

Next year, Google is opening its first campus in Asia in Gangnam, giving mentorship and offering spaces for entrepreneurs to hang out. South Korean Internet giant Naver is also opening a startup accelerator center in Gangnam early 2015.

For 35-year-old Johnny Oh, who grew up in a fishing town, Gangnam was a foreign world that filled him with envy and insecurity.

Encouraged by rich cousins from Gangnam, he moved to the area a decade ago and ran businesses dealing with Gangnam's well-heeled residents, hung out in Gangnam clubs and made Gangnam friends.

When he quit a big telecom firm this summer to start a Cloud-based video editing app to challenge YouTube and Vine, setting up an office in Gangnam was a no brainer.

"They are consumers with far-reaching influence," he said.

Many mobile apps and services that are developed in Gangnam are not just looking within South Korea.

Simon Lee, a 32-year-old entrepreneur, said his company's namesake translation app Flitto, which uses volunteers to do translations within minutes, is taking on Google Translate. His two-year-old startup is planning expansion in China next year.

He said being located in Gangnam helps hiring for little-known startups. Public transportation is among the most convenient in Seoul and there are many hangout places like restaurants and clubs for after work hours.

Gangnam's startup boom reflects a shifting perception on risk taking in South Korea, where the economy is dominated by big family-owned business groups.

Even just a few years ago, the word "startup" was unknown outside the tech circles. That has changed as a growing number of South Korean startup entrepreneurs generate success stories of going public, selling their companies or winning big investments. Last month, a Goldman Sachs-led consortium announced a $36 million investment in Woowa Brothers Corp., operator of a food-delivery app located in broader Gangnam.

South Korea's government is putting more taxpayer money behind young and risky entrepreneurs, not limited to Gangnam startups. The government plans to use a $181 million budget next year to make angel investments in early stage startups.

Still missing in South Korea's startup boom are big companies like Google, Facebook and Yahoo that snap up local startups.

Samsung, LG, SK and other South Korean conglomerates tend to overlook local startups and believe paying big money to buy a startup is an admission of failure, said Flitto's Lee.

"Big companies do almost no M&As. They don't want to admit they are inferior to startups," he said.