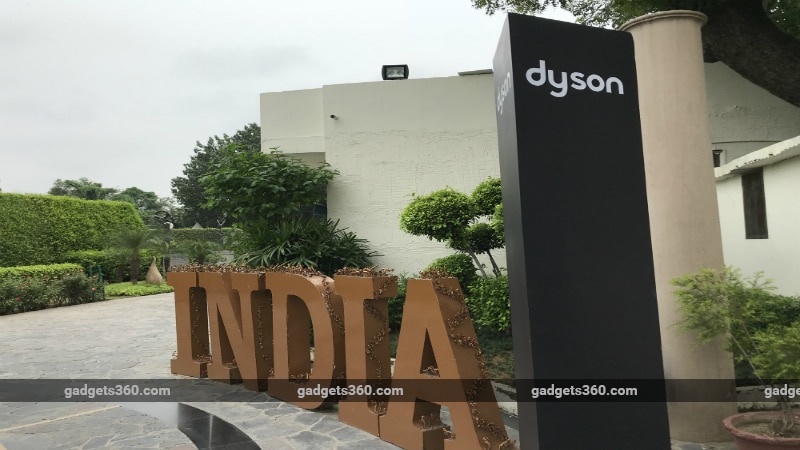 Dyson now has as many as three stores and also offers its products online in India.

Unlike products like smartphones, India so far isn't a massive market for vacuum cleaners and air purifiers. But Dyson, the British giant that entered the country in February with the launch of select vacuum cleaner, air purifier, and hair dryer models, is confident about grow its market presence by bringing new products to India over time.

The company, which is famous for its uniquely designed, cord-free vacuum cleaners, started its journey in the country by establishing just one store in Delhi. Roughly five months later, the number of stores has already gone up to three. Dyson also offers its products online via the official Dyson.in website and Amazon India.

The Malmesbury, Wiltshire-headquartered company also recently kicked off its direct-to-home operations in India. This is aimed at offering the entire range of Dyson products, including the new vacuum cleaners and air purifiers, directly at the doorstep of customers. Similarly, the company has set up its entire customer service network to not only fix any issues, but also to demonstrate its offerings and promote cleanliness in general.

"We [have] made a very good start," Charlie Park, Head of Product Development - Floorcare, Dyson tells Gadgets 360 in a one-on-one conversation. "The last six months have been very very good. We are very happy with the way we are going."

Park highlights that the after-sales service is one of the key areas in which Dyson has made big investments in. Companies often outsource their after-sales service, but the executive says that the British company doesn't rely on any third-parties for any customer-focused services.

"After sales is, in fact, one area that we've invested in," says Park. "What is unique about our operation compared to most companies that come to India [is that] we have all of this in-house. This means we aren't outsourcing any of our customer-facing roles. The stores are ours - run by our own people, our direct-to-home teams are on our rolls, and similar are our after-sales service, contact centres, and service engineers that are ours. The whole idea is to give people a 'true Dyson experience'."

Dyson last month expanded its initial portfolio by launching a new vacuum cleaner and air purifier. The new vacuum cleaner called the Cyclone V10 Absolute Pro uses the all-new V10 digital motor that is claimed to be the company's fastest and the most advanced digital motor, capable of spinning at 125,000 rpm. The motor weighs just 150 grams, significantly lesser than traditional motors. The vacuum cleaner also comes with two new motorised cleaner heads to easily clean carpets and floors. The new air purifier that dubbed Dyson Pure Cool, on the other hand, includes built-in sensors to identify PM 2.5 and PM 10 pollutants and the amount of VOCs (Volatile Organic Compounds) as well as monitor humidity and temperature.

Before launching the new vacuum cleaner in India, Dyson tied up with FICCI Research and Analysis Centre (FRAC) to understand the issue of hidden dust in the country. The two entities jointly work with as many as 100 households across Bengaluru, Delhi, and Mumbai, and their initial research discovered that on average, 125 grams of dust is collected from just four key areas, including carpets, mattress, sofas, and cars. The dust is collected even after the daily cleaning ritual was over in the selected houses.

The company believes that the initial findings underlined the inefficiency of traditional cleaning methods. Moreover, a similar kind of research is set to take place in the country for air purifiers as well. "As we sell more machines in India, we'll gather more information from India in order to make sure that we're designing products that suit the Indian market," says Park.

While research plays a crucial role in understanding the market requirements, calibration of sensors is also important to enable the machines to appropriately detect dust and air pollution. Park confirms that while Dyson doesn't calibrate its sensors specifically for India conditions, it does use the calibration to globally improve the detection of dust and air pollution on its machines. It also regularly tweaks the calibration to make its offerings up-to-date.

"What typically happens is that you can't have different standards for different countries," he says. "It would be not fair to call something good here and bad somewhere else. So what we do is we take inputs from everywhere and then, of course also after looking at standards where they exist - sometimes standards don't exist, coming up with a common scale which makes sense for everybody. Because you can't have it any other way."

While planning its debut in India, Dyson knew that demos will need to play a big part. "I won't call it a challenge, but we're very clear right from the beginning that we have to give a lot of demos because it's an experience we've had in other markets, which used traditional ways of cleaning - like India does," Park tells Gadgets 360. "We're also very clear that we have to make sure people use our machines and ideally in their homes... We've scaled ourselves in quite that manner."

However, not all sales are thanks to the demos. Park says that the moment they received satisfied customers, word of mouth publicity has helped as well. "This is why despite very short period - we've been here around six months, we find our online sales as good as our offline sales," he continues, without revealing any precise sales figures.

Despite a promising start in the country, Dyson doesn't have any plans to move its R&D to India. The company has its R&D concentrated in three places globally; while its main development centre is in the UK, it has its technology centres in Malaysia and Singapore as well. There is also a centre in China that largely does the app work and helps understand the needs of the local market. Having said that, Park asserts that Dyson engineers are placed in markets around the world. "We have our engineers placed in markets around the world to make sure that we are feeding the needs of those markets back to where we are designing our products," he mentions.

Apart from utilising inputs from local engineers to develop products for the Indian market, Dyson also has plans to bring healthcare institutions on board to bolster its growth in the country. There are also plans have some experts from India on the company's global advisory board.

"We've started reaching out," Park reveals. "It has to be done in a very transparent, and it has to be worked for both sides. So we've started now. [We are] also talking to people who are a larger body of self-practitioners, etc. We have a global advisory board which guides our development and R&D, etc. so we are now also evaluating that given the scale and size of India and some of the severity of the issues, we should have some of the experts from India on those boards. Those are the things that we are started to talk about now that we are on the ground."

In addition to utilising local expertise, Dyson is evaluating opportunities to source raw materials and other stuff needed for its manufacturing bases from India. But importantly, the company doesn't have any plans to Make in India just yet.

"We have a global supply chain, so we evaluate where we manufacture depending on a variety of factors," Park tells Gadgets 360. "But we keep evaluating at least sourcing opportunities, which we are doing currently in India so that we source stuff for our manufacturing bases from India." The company notably sells its goods in more than 85 countries across the globe, though the manufacturing is limited to three locations - Singapore, Malaysia, and the Philippines.

Talking to Park, however, it's evident that India is considered as one of the big potential markets for Dyson. "It's clear that we're seeing it as a huge opportunity, and our experience in developing markets has shown that if consistently deliver the Dyson experience and listen to the consumers and make sure that our machines solve their problems - this means the opportunity is huge," he concludes.