Not Just Design and Function, Dyson Even Obsesses About How Its Appliances Sound to Your Ear 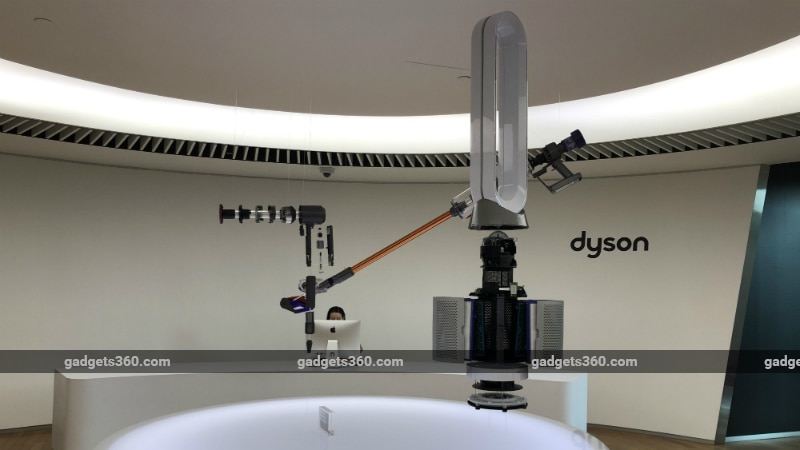 Dyson has major Development Centres in Singapore and Malaysia

"If you do the same as [what] everybody does, you'll always get the same output," Dyson Global Category Director Sam Bernard told media during an hour-long conversation at its Singapore Development Centre earlier this month. That spirit lies at the heart of the British company that is now increasingly banking on Asia to supplement its product development efforts. The Malmesbury, Wiltshire-headquartered company has had its Development Centres in Singapore and Malaysia for quite some time. But now, it has expanded the Malaysia Development Centre that it commonly calls MDC with 22 different laboratories and hands-on prototyping space, with the aim that's at the core of the company — to build something different to stay innovative.

"Dyson is owned by one person — James Dyson," says Bernard. "He is not really doing all this to make money. If he was, he would be making toasters, kettles, or rice makers — all the stuff that people buy in millions every year, and he could stick Dyson on a label and would sell a lot, and he would be much richer. But he doesn't really do that. He does stuff because he wants to make things look different — not just different but better than anyone else's."

Making things different from the competition isn't an easy task, which is why Dyson extensively relies on its R&D teams. "The amount of R&D we invest and the technologies that we invent should be felt something very special and very different to their end users," Dyson VP Global Engineering and Operations Scott Maguire tells Gadgets 360 on the sidelines of the expanded Development Centre launch in Malaysia. "For us, that's really what we're always trying to do and that makes product development very hard."

"We believe if we do that in a very good way, then the competition to sell to an extent isn't really that important because we create new markets and new formats," he adds.

Established back in 1991, Dyson initially gained huge popularity for its cyclonic vacuum technology-backed, bagless vacuum cleaners. But with increasing air pollution, the company is also baking on other products like air purifiers to make a dent in developing markets such as India. Dyson entered the Indian market earlier this year, and in August, it expanded its retail footprint to three exclusive stores — two in Delhi and one in Bengaluru — and via direct-to-home operations in Bengaluru, Delhi, and Mumbai. While India is still being a young market for Dyson, the company has been relying on Malaysia as a key source for R&D for quite some time.

Dyson forayed into Malaysia in 2000 to develop and manufacture new products. However, with the expansion of its products to various Asian markets and with the availability of a large number of local engineers, the company has now moved from three buildings to four buildings in Johor, a southern Malaysian state linked to Singapore by causeways, and grown its Development Centre from 350 square metres to 35,000 square metres. The new campus includes 22 labs — ranging from Acoustic and Fluid Dynamics labs to an Electro-Magnetic (EMC) Chamber and a POLAR test lab.

Among other labs, the Acoustic lab is specifically designed to improve how Dyson products like vacuum cleaners, air purifiers, and hair dryers sound.

"Acoustics can be quite complex, but it is always interesting," says Dyson Engineering Manager Pete Duckett. "We don't just look at the overall sound power, but we have to design our products in a way to make sure that their sound production is at a reasonable level. We have to adapt it to the human hearing, and also there is a sound quality that comes into consideration. We tend to eliminate all the high-pitched tones to get a better quality of noise."

The lab has an array of 10 cardioid microphones that are available in an arrangement to measure sound levels from the machines from different levels. Dyson engineers at the Acoustic lab also test competitive products to evaluate how better and less annoying its products are when it comes to sound production.

Similar to most other tech companies, Dyson doesn't manufacture products on its own and thus outsources the production of its machines. The expanded Development Centre in Malaysia, however, comes as an avenue for the company's engineers to make sure that the outsourced products meet its quality standards. The labs at the Centre are also being used to test the initial prototypes before making them the final products.

"Working on the production process requires quality standards, and we set those quality standards for our partners," states Maguire. "Because we are so close to our partners, we can find quality defects and can test their developments quickly." He also emphasises that the manufacturing partners in Malaysia have also “invested very well” on the company. "It's very much a two-way partnership," he says.

Notably, Dyson moved all its manufacturing to Malaysia several years ago. But at its hometown in the UK, the company still majorly has one team that works on the early conception.

"It is when the thing is made out of cardboard," reveals Bernard. "That's done by one team in the UK, which we call NPI (New Production Innovation). It takes anywhere from six months and some things we worked on for 10 years in that team before we find to come out with a final product. We then do another stage of development in the UK that is anywhere between six months to a year. We then get into a fully work-in prototype that we send it over to Malaysia, Singapore, or sometimes to the Philippines [depending on the product category]."

Bernard, who started his career working with submarines, leads the team of engineers who work on environmental control (EC) machines like air purifiers.

"Out of my team, maybe 60 engineers in the UK, I primarily take three of those out and send them around the world so that they can go to different locations and learn," asserts Bernard. "It's important as we aren't just designing something that we think it's right, but it's right for real people's problems.”

Dyson also sponsors various institutions, including Oxford and Cambridge Universities and the King's College London, to work on new projects. "Some of these projects are 10 or 20 years away stuff that we're sponsoring to look at," states Bernard. "In fact, there are motors that came through a university programme.”

To make its air purifiers compatible with the global conditions, Dyson engineers don't take any specific market into mind during their development. Instead, Bernard reveals that the company quite often try and design its products for the worst possible situation. This helps meet the requirements of various regions across the globe.

Having said that, extensive R&D requires a large number of resources that can not only be in the form of highly skilled engineers and scientists but also in terms of monetary support. This means Dyson products often cost more than the competition.

"You don't really want to make trade-offs when you do engineering, you always want to do the best," says Bernard. "That's what Dyson very much tries to do. We're totally unapologetic that our machines are quite expensive — more expensive than our competitors. But why? Well, because we don't want to make any compromises."

Apart from having in-house talent, Engineering Manager Duckett says that Dyson works with various external testers. "We also work with external testers so that we can not just get into the market quicker but also continue developing our products later as well," he points out.

Just like any other tech giant, Dyson finds it difficult to restrict the development of counterfeit products that appear similar to its EC machines but have cheap, inferior hardware underneath. "We spend a lot on innovating and also protecting our intellectual property," says Duckett. "We also secure patents; we have patents more than a lot of what other companies in the UK and around the world have. But, of course, that doesn't limit people trying to copy our technology."

Dyson's expanded Malaysia Development Centre is a part of its MYR 3 billion (around Rs. 5,142 crores) investment in the country over the last decade. Maguire tells Gadgets 360 that the company is also committed to investing as much as GBP 2.5 billion (roughly Rs. 22,700 crores) over the next four years to power its overall R&D operations. Some part of its overall R&D investment projection will be used for the ongoing electric vehicle (EV) development that is set to reach its final stage in 2021.

"The development [of the electric car] is right now in the UK, and its manufacturing is in Singapore," reveals Maguire. "That's as much as we communicated. Of course, we want to build big engineering teams to make it on our success."

Here's Why Dyson Picked Singapore to Build Its Electric Car

Dyson currently employs more than 1,200 people in Malaysia, out of which 800 are engineers and technicians. The company is also working with contract manufacturers to support more than 30,000 jobs in the process. In 2019, it additionally aims to directly hire 200 more people in Malaysia to bring several new distinct products.

Unlike Malaysia, India is not on the radar for Dyson as far as setting up a Development Centre is concerned. "I think initially it's a commercial entry point," says Maguire. "But from now, we are also looking a supply chain there as well. We're always very open to where we want to set up engineering in the future. We got no plans for India right now, but we know that India produces some fantastic engineers as well. So we're always interested to find the best engineers."

That being said, Dyson is open to having its R&D anywhere in the world. "Since we are today a global technology company, it really doesn't matter to have an R&D facility as long as it works for the time zone and what we're trying to develop for that market," says Maguire.

Dyson is also looking for a solution to meet the growing demand for its products to lead the market. "A lot of our most recent launches have become so successful that we're trying to catch our production volumes and stop the problem of stocking out," affirms Maguire. "That's a good problem to have, but it's still a problem for us. So we're working hard to fix that as well."

Disclosure: Dyson sponsored the correspondent's flights and hotel for a tour of its Development Centres in Singapore and Malaysia.