With ever-rising levels of air pollution, we've reached a stage where you absolutely need to take steps to help breathe more easily. This might mean putting together a DIY air purifier, or buying one from the big brands, or even buying an air mask. Dr. Alok Thakar, Otorhinolaryngologist, AIIMS Delhi told Gadgets 360 that a surgical mask doesn't help, as air seeps in from all sides, so you really need to invest in a proper air mask. The options range from relatively cheaper products that start at around Rs. 500 to more expensive ones that are priced at around Rs. 2,000.

Gadgets 360 met with Christopher Dobbing, founder and CEO of the Cambridge Mask Company, alongside Vibhor Jain, CEO of Atlanta Healthcare, a company that sells air purifiers, and is now starting distribution of the Cambridge masks in India. While Cambridge products were available in the country before, the company didn’t have a presence here. Now, Dobbing says the plan is to reach out to corporates, schools, and other institutions here to offer customised, branded products, and participate in awareness initiatives as well. Whether that's enough to convince people to invest around Rs. 2,000 on a disposable product whose benefits are not immediately visible is hard to say, but Dobbing is clear that there is a serious need - particularly in India - to look at the issues related to air pollution more seriously.

"We started from China in 2012, and what we can see is that the market in India is three to four years behind China right now, but that means that you're going to see wearing masks become much more widespread now as awareness builds up," says Dobbing. "You have 80 people dying every day in Delhi from air pollution, and seven million people die annually around the world, more than HIV AIDS and Malaria combined."

Dobbing, who is from Cambridge in the UK moved to China, and he noticed that it was increasingly common to see children with inhalers, and a variety of respiratory conditions. "The air filters, they started with industry, so the masks were all adult-sized, there wasn't much for children," he explains, "so that was something we wanted to address."

Formerly in the Air Force, Dobbing reached out to the same supplier who makes filters for the military's CBN (chemical/ biological/ nuclear) suits, and got into the air filter business. Cambridge Mask Company has masks in five sizes, starting from extra-small - ideally for children between 6-10kg in weight - to extra-large, for adults over 90Kg in weight. The masks meet the N99 rating of the US CDC, Dobbing adds, while most masks sold in India are only rated to N95. The difference isn't much - the rating is a measure of effectiveness as a percentage of particles filtered out, and N95 is commonly used worldwide. 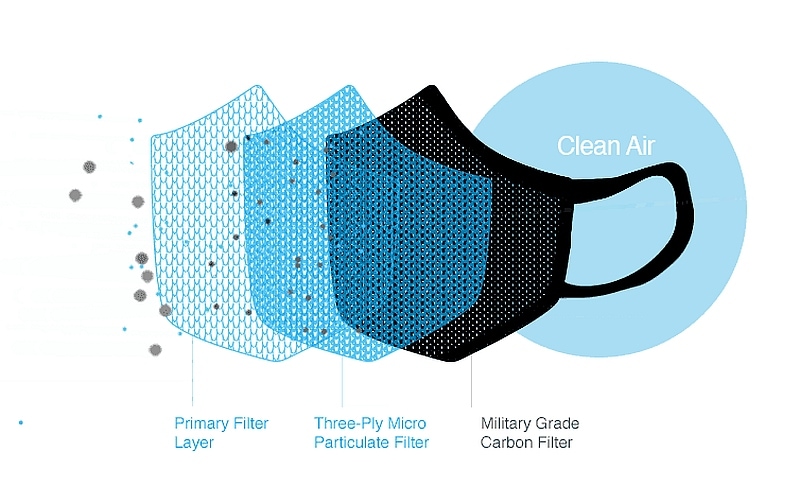 However, Dobbing stresses that children are particularly at risk from air pollution, and repeats that with more sizing options, Cambridge Mask Company products will be much better for children to use. He adds that the company's products have three filters, including a HEPA filter, and a layer of activated carbon. All the sourcing is done from the UK and assembled there, though he says that if the product takes off in India, then the company will try and get the masks assembled here to bring costs down. But getting people to actually buy air filters is a challenge. When Gadgets 360 asked people why they aren't interested in getting a mask, people talked about finding them uncomfortable, expensive, and off-putting for others.

That being said, he believes that as visibility and awareness grow, the market is going to build up, and points to the fact that Atlanta Healthcare is selling air purifiers in 75 cities across India. "Delhi leads, but Bengaluru is also big, you know that pollen is a problem in Bengaluru and so a lot of people need a good air mask, and Chennai is also big," Jain adds. "And Surat is picking up too. In 2010, it was only businesses and expats buying purifiers, today families are doing it, and we will see it in India too."

That being said, Dobbing believes that the government also has a role to play in this. "In China, the state schools were a big part of education about air pollution," he explains, "so if the pollution is above a certain level, for example, then the children were not allowed to go out to play during the recess."

Without the same kind of support, it's hard to say if we'll see large scale adoption of this type of product in India, as air pollution related problems are less obvious than problems related to impure water, for example. For now, it's up to the companies themselves to build awareness, and that's going to be a challenge.

Further reading: Air pollution, Cambridge Mask Company, face masks, Particulate Matter Air Pollution
Gopal Sathe Email Gopal Gopal Sathe is the Editor of Gadgets 360. He has covered technology for 15 years. He has written about data use and privacy, and its use in politics. He has also written extensively about the latest devices, video games, and startups in India. Write to gopal@ndtv.com or get in touch on Twitter through his handle @gopalsathe with tips. More
Nasa Plans to Send Submarine to Saturn's Moon Titan