Bharat Prajapati, the inventor of the pani-puri machine, lives in a village called Raviyana in Gujarat

Given all the ways the world has changed since the coronavirus pandemic, the fact that many street food vendors are no longer around seems like a small thing, but a new gadget, created from leftover scraps by a Gujarat man who runs a mobile and electronics repair shop in Raviyana village in the state, holds hope that the golgappa (or paani puri, or puchka, as you prefer) could make a socially distanced comeback. Bharat Prajapati, 33, created a machine that works like an ATM but instead of notes, dispenses golgappas so you can get your snack without coming into contact with any person or risking the spread of COVID-19.

The money is inserted into one slot, while the golgappas slide out from another opening. Prajapati, a local from the small Banaskantha district of Gujarat, said that years of first hand tinkering with electronics led him to building this machine. Prajapati said he learned the skills needed to make his golgappa machine through tinkering with electronics rather than from a classroom. He dropped out of school and decided to do a one-month mobile repairing course from a nearby schooling institute. His brother Shravan, 30, has more formal training and works at Tata Motors in Samand, Ahmedabad.

His parents — who make bricks and pottery for a living — live with him in a small house, along with his other brother, Suresh, his wife Kailash, and three children. Prajapati managed to convince his parents to let him open a mobile repairing shop by tearing down a part of their house. A small portion of the home was then broken down to create a makeshift shop that he works from.

He told Gadgets 360 that he started by just repairing old phones and other electronics to make ends meet. His passion for creating inventive devices seeded at the shop and grew over the years, and the golgappa dispensing machine is his latest conception.

“We can install this machine on the roadside, as well as in a shop. You can power it through the plug-in method or make it work using a chargeable battery. The machine works on a 24-volt standalone battery, and on a single charge, it can last for up to six hours,” Prajapati explained to Gadgets 360 in Hindi, translated here to English. It took only six months to develop the golgappa machine, made from re-used scrap from his shop. 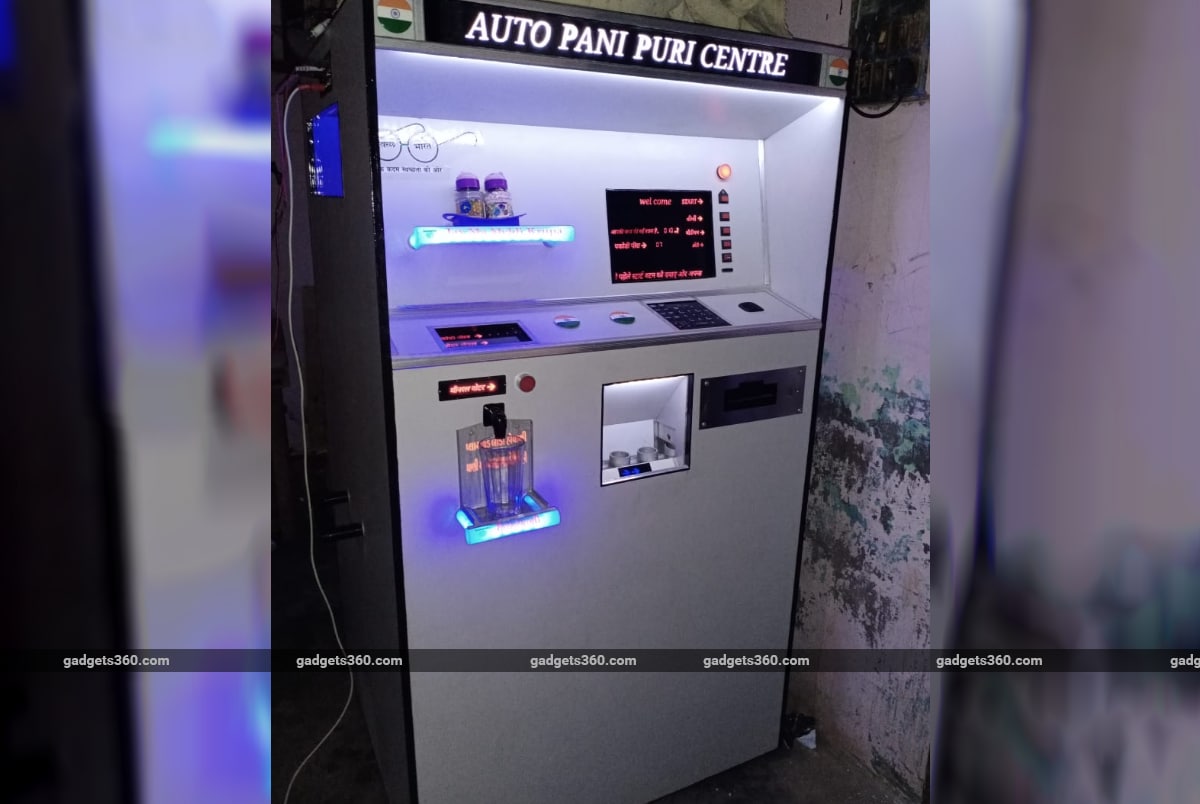 The machine runs on standalone battery or the plug-in method

Prajapati built the entire machine using scrap and waste material. He told us that he is often left with old electronic scrap that just goes to waste. Rather than let that happen, Prajapati turned his trash into tech — like making a drill machine, an electric stove, and a water pump that uses solar power and batteries, and these gadgets have found use around the house even today. The golgappa machine was another ‘jugaad' (make-shift) project that Prajapati worked on, but given the COVID-19 pandemic, it gained unexpected utility.

Now this is real Indian ingenuity!

Call it by any name Gol Gappe, Puchka, Batasa - we love it! pic.twitter.com/wC288b9uUD

The machine went viral on social media, and even Additional Director General of Police (ADGP), Assam Police, Hardi Singh shared it via his Twitter handle, saying, “Now this is real Indian ingenuity!” Prajapati says that he has been getting numerous calls about the machine ever since. “I'm getting about 2,000 calls every day asking me about the machine, ever since the video has gone viral. What I built was just a demo machine, I do not have the manufacturing power to make these for commercial purposes,” Prajapati said, adding, “However, a lot of distributors have gotten in touch and we are looking at ways in which we can turn this into a profitable business.”

The machine is a work in progress as it still needs a lot of polishing before it is even ready to hit the market. There is no software integration, and Prajapati used a waste keyboard to punch numbers in. He said that with the right backing, he can build a high quality paani-puri machine that could sit in the corner of any restaurant or street.

The cost of building the demo machine was well under Rs. 40,000, but he thinks that it could be priced much cheaper if it were produced in a streamlined manner. “All the owner has to do is regularly refill the puris, the masala, and the different kinds of paani (spicy, medium spicy and sweet) inside the machine, and all of the assembling work is then taken care by the dispenser,” he said, adding that the vendor will only need to be responsible about quality of the food put inside the machine.

Further reading: Bharat Prajapati, Pani Puri Machine, Automated Pani-puri Machine, Golgappa, COVID 19, social distancing
Tasneem Akolawala Email Tasneem Tasneem Akolawala is a Senior Reporter for Gadgets 360. Her reporting expertise encompasses smartphones, wearables, apps, social media, and the overall tech industry. She reports out of Mumbai, and also writes about the ups and downs in the Indian telecom sector. Tasneem can be reached on Twitter at @MuteRiot, and leads, tips, and releases can be sent to tasneema@ndtv.com. More
JioMeet: How to Download, Start a Meeting, and Everything Else You Need to Know About This Zoom Clone
Realme C11 India Launch Teased by Company as 'Next Addition' in C-Series