Apple Chief's Decision to Come Out 'Will Resonate' 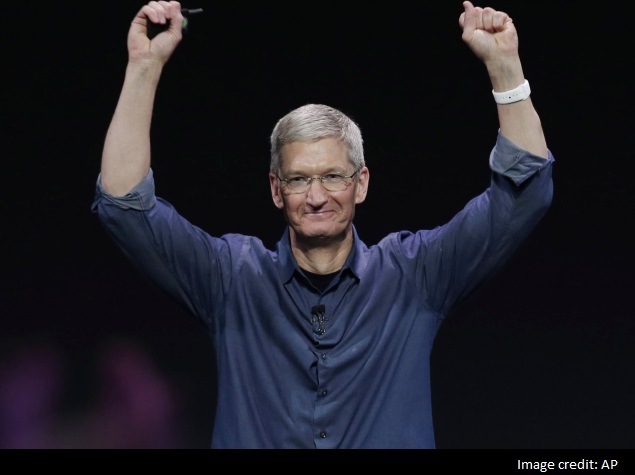 Trevor Burgess, the openly gay chief executive of C1 Financial in Florida, and one of the first publicly gay chief executives of a public company, said Tim Cook used "the metaphor of laying a brick on the 'path towards justice.'" But, "This is more like 600 million bricks," Burgess said. "He has the most influential voice in global business."

Given widespread rumors that he was gay, including being ranked No. 1 on Out magazine's list of the most powerful gay people last year, the fact that Cook is gay is less surprising than his willingness to publicly acknowledge and embrace it.

He certainly made the announcement from a position of strength: Apple just completed the most successful product introductions in its history, the iPhone 6 and iPhone 6 Plus, and reported record cash flow this month. Apple's latest fiscal year "was one for the record books," Cook told investors. Cook has survived the intense glare of attention since succeeding Apple's legendary founder, Steve Jobs, in 2011.

Still, Cook was plainly reluctant, and, as he put it in his essay in Bloomberg Businessweek, "I don't seek to draw attention to myself." But, he wrote, he came to the realization that "If hearing that the CEO of Apple is gay can help someone struggling to come to terms with who he or she is, or bring comfort to anyone who feels alone, or inspire people to insist on their equality, then it's worth the trade-off with my own privacy."

Although Cook and Blankfein are professionally close (they were together in China last week), and Blankfein has publicly championed gay rights, they had never discussed Cook's sexual orientation. "I don't talk about my sexual predilections, and if anybody asked it would be jarring," Blankfein said. "No one owes the public such a deep view of his personal life. People underestimate how hard this is. But someone had to be first. For Tim, this was a commitment to make life easier and better for others. It was a generous and courageous thing to do."

It's also something that was "unthinkable" when Allan Gilmour was chief financial officer and a board member at Ford, Gilmour said. "Companies didn't want controversial executives," he recalled. As a gay man, he kept his own sexual orientation a closely guarded secret, he said, but there were rumors. He was single and had never married. He retired in 1995 at age 60 after he was twice passed over for the top job.

Cook's announcement is "historic and it's wonderful," Gilmour said. Progress "has been erratic, but it's major." Gilmour came out to a local newspaper in 1996, returned for a stint as the openly gay vice chairman at Ford, and served as president of Wayne State University and on numerous corporate boards. He recently married his partner, Eric Jirgens, in Vermont.

On Thursday, he sent Cook an email thanking him for his "courage and leadership." He added: "I found, after I outed myself in a poorly planned interview, that my life had a new, and wonderful, dimension. I didn't have to dissemble, lie, exaggerate, change the subject, etc. I was what I was."

Richard L. Zweigenhaft, co-author of "Diversity in the Power Elite: How It Happened, Why it Matters" and a psychology professor at Guilford College in North Carolina, who has closely tracked the progress of minorities in business, said Cook's announcement gave him "the same feeling that I had back in 1998, when many were speculating about when the first African-American would be appointed a Fortune-level chief executive and who it would be."

There were two named in 1999 - Franklin D. Raines at Fannie Mae and Lloyd Ward at Maytag. By 2005, there were seven more African-American chief executives at Fortune 500 companies. "Those first appointments really opened the gates," Zweigenhaft said. "It was like the car went from zero to 60 in 10 seconds." But since then, progress has stalled, and there are no more African-American chief executives today than there were in 2005.

Zweigenhaft noted that unlike African-Americans, women and Hispanics, for gay men and lesbians, "There's the issue of self-disclosure - they may choose not to publicly disclose their sexual orientation." That may be one reason it has taken so long for a chief executive of a Fortune 500 company to come out publicly as gay since doing so may distract from the company and its products.

"Your mission at Ford was to serve the company," Gilmour said. "It wasn't to draw attention to yourself. It wasn't about self-realization."

This was evidently a consideration for Cook. In his essay, he said, "I like keeping the focus on our products and the incredible things our customers achieve with them." Cook told Josh Tyrangiel, senior executive editor at Bloomberg, that he had sought and obtained the approval of Apple's board before making the announcement, Tyrangiel said on Bloomberg Television.

But he acknowledged in an interview: "There are still pockets of resistance. There's still gender discrimination, and we're still dealing with racial issues. I'm not sure we can say the battle has been won. But I think people are pretty confident how the battle will end. It's amazing how much progress has been made and how fast."

Todd Sears, founder of Out on the Street, which promotes gay and lesbian leadership in the financial industry, and who has been encouraging gay chief executives to come out, said Cook's statement might have even more impact outside the United States. "Sixty percent of Apple's sales are outside the United States," he said. "People love Apple products. It's the biggest company on the globe. There are 78 countries where being gay is illegal, and in a third of those, it's punishable by death. What are those countries going to do when Tim Cook comes to visit?"

Cook's statement also seemed carefully drafted to be inclusive, to embrace anyone who feels different or excluded, which could broaden its impact far beyond the lesbian, gay, bisexual and transgender communities. Cook was "wonderfully candid about why it was difficult for him to come out," said Kenji Yoshino, professor of constitutional law at New York University and co-author of "Uncovering Talent: a New Model for Inclusion." "When I give presentations on diversity and inclusion in organizations, I often start by noting that of the Fortune 500 CEOs, 5 percent are women, 1 percent are black and 0 percent are openly gay."

Yoshino added: "We should honor these individuals as the pioneers they are. But one way we do so is to let them know that we will not reduce their stories to that one narrative. So in my next presentation, which I am about to give in an hour, I will happily adjust the gay CEO statistic up to 0.2 percent, but underscore that the movement has occurred today thanks to 'the nature lover and sports fanatic' Tim Cook."