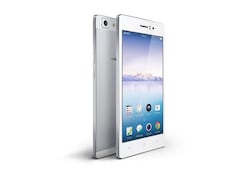 Haute Couture is a French phrase used to refer to the practice of creating high fashion, custom-fitted garments which are mostly suited for models walking the ramps in cities like Paris, London or Milan. With smartphone manufacturers across the world racing to launch models that can turn heads, we might be looking at a new wave of phones that can be elevated to the level of haute couture.

Oppo R5 smartphone was launched in October 2014. The phone comes with a 5.50-inch touchscreen display with a resolution of 1080x1920 pixels at a pixel density of 423 pixels per inch (ppi). Oppo R5 is powered by a 1.5GHz octa-core Qualcomm Snapdragon 615 processor. It comes with 2GB of RAM. The Oppo R5 runs Android 4.4 and is powered by a 2000mAh non-removable battery.

Connectivity options on the Oppo R5 include Wi-Fi 802.11 a/b/g/n, GPS, Bluetooth v4.00, Headphones, FM radioWi-Fi Direct, 3G, and 4G (with support for Band 40 used by some LTE networks in India). Sensors on the phone include accelerometer, ambient light sensor, and proximity sensor.