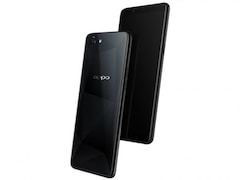 The exact camera configuration of the Oppo A73s is not yet known, but it can be expected to pack a multi rear camera setup (13-megapixel) and a single front camera setup (8-megapixel).

Connectivity options on the Oppo A73s are said to include Wi-Fi, GPS, and Bluetooth v4.20. Sensors on the phone are rumoured to include accelerometer, ambient light sensor, proximity sensor, and compass/ magnetometer.