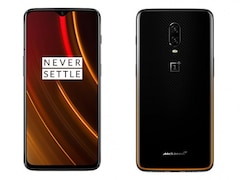 OnePlus, in collaboration with historic British racing brand McLaren, recently launched the OnePlus 6T McLaren Edition in India at a price of Rs. 50,999. In its illustrious history, the McLaren Formula 1 team has won eight constructors' championships and twelve drivers' championships. The name is associated with speed and that is the exact rationale behind this partnership as the OnePlus 6T's slogan is ‘Unlock The Speed'.

The OnePlus 6T McLaren Edition will definitely appeal to fans of McLaren and Formula 1 in general. The meticulously crafted retail box, exclusive accessories, and the speed mark logo made from carbon fibre extracted from an actual McLaren Formula 1 car makes it quite special. That said, the performance improvements are incremental and regular users will be better served by the cheaper, regular variants of the OnePlus 6T.