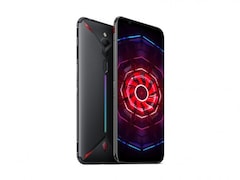 Choosing a smartphone for gaming used to be quite simple. All you had to do was look for a good display and a powerful processor. While many affordable and high-end phones will let you enjoy games, there are smartphones today made specifically for gaming. We have seen phones including the Asus ROG Phone (Review), Nubia Red Magic (Review), and the Black Shark 2, even in India. These smartphones are purpose-built for gaming and most feature liquid cooling to keep the processor temperature under control. Nubia is bringing yet another gaming smartphone called the Red Magic 3 to India. It features the powerful Qualcomm Snapdragon 855 SoC and has liquid cooling along with an internal fan.

The Red Magic 3 is a gaming smartphone from Nubia. It not only has the powerful Qualcomm Snapdragon 855 SoC, but it also has liquid cooling along with an internal fan and shoulder buttons for gaming.

The Nubia Red Magic has a 6.65-inch full-HD+ HDR AMOLED display with good viewing angles. It also has a faster 90Hz refresh rate which comes in handy in supported games. It does have front firing stereo speakers which help improve the gaming performance on the smartphone. The Red Magic 3 also has a dedicated key for gaming mode.

The Nubia Red Magic has a 5,000mAh battery which helps you stay off the charger for a really long time. The Red Magic 3 has an RGB light strip at the back which light up for incoming notifications and when the Gaming mode is enabled.

Nubia has launched two variants of the Red Magic 3 in India, 8GB RAM with 128GB of storage and 12GB of RAM with 256GB storage. It is a dual SIM device and ran Android Pie of the box. The 5,000mAh battery does help deliver good battery life and Nubia supplies a 27W charger in the box.

At the back, the Red Magic 3 has a single 48-megapixel camera which clicks photos at 12-megapixels by default. It has a 16-megapixel selfie shooter as well. The camera performance of the Red Magic 3 was decent but some of the key camera features were missing. If you are looking for a smartphone primarily for gaming, then the Red Magic 3 is something you should consider.

Nubia Red Magic 3 Review - Should You Buy This Gaming Smartphone? 10:53
Choose a variant