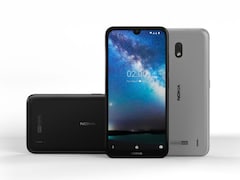 Powerful smartphones have become more affordable, and no, we aren't just talking about flagship-class models in the sub Rs. 40,000 segment. Today, we're talking about the under Rs. 8,000 segment in which you can now get good phones such as the Realme C2 (Review), Infinix Smart 3 Plus (Review), and Redmi 7 (Review). These smartphones offer decent performance and features considering their low prices. The Infinix Smart 3 Plus, for example, is one of the few phones to sport a triple camera setup with a dedicated low-light camera sensor. HMD Global seems to be eyeing a spot for itself in the sub-Rs. 8,000 segment, and has launched the Nokia 2.2 for this reason. Is this smartphone capable of pulling it off, or will it fall short? We put it through our tests to find out.

The Nokia 2.2 runs Android Pie and is powered by a 3000mAh battery.

As far as the cameras are concerned, the Nokia 2.2 on the rear packs a 13-megapixel camera with an f/2.2 aperture and a pixel size of 1.12-micron. The rear camera setup has autofocus. It sports a 5-megapixel camera on the front for selfies.

Nokia 2.2 based on Android Pie and packs 16GB of inbuilt storage that can be expanded via microSD card (up to 400GB). The Nokia 2.2 is a dual-SIM smartphone that accepts Nano-SIM and Nano-SIM cards.

Connectivity options on the Nokia 2.2 include Wi-Fi 802.11 b/g/n, Bluetooth v4.20, USB OTG, Micro-USB, and FM radio with active 4G on both SIM cards. Sensors on the phone include accelerometer, ambient light sensor, and proximity sensor. The Nokia 2.2 supports face unlock.

Nokia 2.2 Review – Stock Android And Removable Battery, But Worth Buying? 08:06
Choose a variant