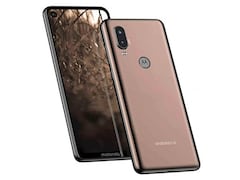 Motorola P40 is an upcoming smartphone by Motorola. The phone is rumoured to come with a 6.20-inch touchscreen display.

Motorola P40 is expected to be powered by an octa-core Qualcomm Snapdragon 675 processor and come with 6GB of RAM.

The Motorola P40 is rumoured to run Android 9.0 and is expected to be powered by a 4132mAh battery.

Motorola P40 based on Android 9.0 and packs 64GB of inbuilt storage. The Motorola P40 tipped to be a dual-SIM smartphone that will accept Nano-SIM and Nano-SIM cards.

Connectivity options on the Motorola P40 are said to include Wi-Fi 802.11 a/b/g/n/ac, GPS, Bluetooth v5.00, NFC, USB Type-C, and 4G. Sensors on the phone are rumoured to include accelerometer, ambient light sensor, compass/ magnetometer, gyroscope, proximity sensor, and fingerprint sensor.