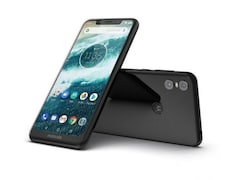 Motorola One smartphone was launched in August 2018. The phone comes with a 5.90-inch touchscreen display with a resolution of 720x1440 pixels and an aspect ratio of 18:9.

Motorola One is powered by a 2GHz Qualcomm Snapdragon 625 processor. It comes with 4GB of RAM.

The Motorola One runs Android 8.0 (Android One) and is powered by a 3000mAh battery.

Motorola One based on Android 8.0 (Android One) and packs 64GB of inbuilt storage that can be expanded via microSD card (up to 256GB).

Connectivity options on the Motorola One include Wi-Fi 802.11 a/b/g/n/ac, Bluetooth v5.00, and USB Type-C. Sensors on the phone include accelerometer, compass/ magnetometer, gyroscope, proximity sensor, and fingerprint sensor.

Motorola One Price in India

Motorola One User Review and Ratings