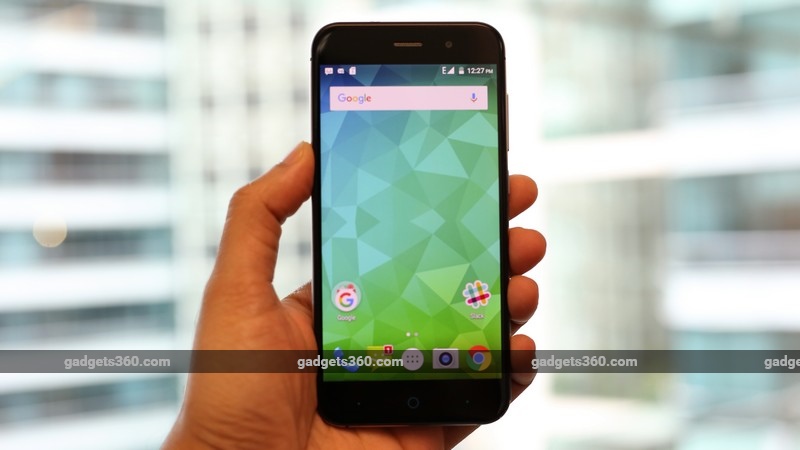 ZTE has had a decent number of smartphone launches this year but barely any have made it to India. Its most recent India offerings includes the Blade V6 and Axon Mini, of which we'll be testing the former.

ZTE's new budget offering was in fact launched a year ago under the name Blade D6 and the specifications and features seem pretty much unchanged in the version we have in India today. Given the current state of the market, the Rs. 9,999 price tag feels a bit steep for a phone that's nearly a year old, but perhaps the Blade V6 will surprise us.

Design and build
The design grabs your attentions right from the get go and we had similar reactions from everyone we handed the phone to for the first time. It's quite slim at 6.8mm in thickness and incredibly light at just 122 grams. Plus, there's no shaking off that unmistakable iPhone-like feeling when you hold it.

It's comfortable to hold and button placement is ergonomic. The fit and finish of the buttons isn't the best as there's a fair bit of wobble and our test unit's power button was a bit wonky to begin with. The 5-inch HD IPS display has good levels of brightness for outdoor use however according to the company; it lacks any form of scratch protection so you'll need to be extra careful during daily usage. The resolution is also just HD and not full-HD. There are capacitive buttons below the display that light up in blue.

The Blade V6 had a metal frame and back, but it's not a unibody design. The hybrid SIM tray sits on the left and 4G support is present for Indian bands, but only for the first SIM slot. The second SIM slot supports only 2G. You can expand the internal storage by up 64GB if you don't bother with a second SIM.

The mono speaker is placed on the back, along with the 13-megapixel camera and dual-tone LED flash unit. A fingerprint sensor is missing but then that's to be expected considering it's an older model.

In the box, you get a standard 5W charger and a data cable. The quality of the accessories is decent and should last you.

Specifications and features
We wish ZTE would have taken a bit of effort to update the SoC before launching it here but it hasn't. What you're left with is basic quad-core MediaTek MT6735 SoC with 2GB RAM and 16GB of storage. For Android Lollipop, this is quite sufficient and benchmark scores reflected the same. AnTuTu gave us 29499 while we got 14fps in the T-rex test of GFXbench. Other specifications include Wi-Fi b/g/n, Bluetooth 4.0, USB OTG, GPS and FM radio.

Having an older chipset is not that big a deal, provided the phone is priced sensibly but older software is something of a deal-breaker. The Blade V6 runs on Android 5.0.2 which is two versions behind the latest version of Lollipop, which in itself is now two generations behind the current version of Android. To make things worse, the Android security patch hasn't been updated since last November. This is a bit worrying especailly when you consider how often we hear about security exploits and hacks on the Android platform.

The stock launcher gives you a single-layered layout for the home screen, which can get pretty confusing due to the poor choice of icons and a ton of bloatware apps. Thankfully, you can switch to the stock launcher which is much easier to live with. ZTE has added the option to swap the functions of the capacitive buttons, for some who like having the Back key on the right of the home button.

There are a bunch of third-party apps and some redundant ones like two music players, which unfortunately you cannot uninstall. You get AliveShare, which lets you send files and messages over an ad-hoc network; Chaatz is another messaging service; Every Stripe Live wallpapers; Hubii News; Shazam; Google suite of apps and AVG antivirus.

Unlike the music players, most of these apps can be uninstalled including some ZTE apps like iShow, which starts playing a video of your choice when you unlock the phone. Most of the apps are things you'll never use and want to get rid of right away.

Performance
The interface of the Blade V6 is quick and speedy to navigate through. App launches are fairly quick and multi-tasking is a relatively smooth affair with little to no lag interrupting you. The phone also doesn't heat up much even when playing a game. Call quality is not great though, as even at full volume we would struggled to hear the caller at times and the microphone is quite weak too.

The Blade V6 does a good job at media playback as it handles high bit-rate full-HD videos pretty well. Audio performance is not too shabby either thanks to something called Arkamys sound enhancement. Despite the mono speaker, the volume level is pretty good which actually makes watching videos quite enjoyable.

The rear 13-megapixel camera captures surprisingly detailed macros in daylight but landscape shots are pretty average. Detail levels are not great, especially with objects that that are towards the edges of the photos. Low-light images are passable if there's is just one or two light sources but anything more, like a landscape shot of a street, and the camera cannot handle it. Focusing and saving speeds get increasingly sluggish with low ambient light.

The front camera is decent for selfies but again, only under good lighting. The camera app is your run-of-the-mill Android app that we've seen on pretty much every budget smartphone for a few years now. Shooting modes include Face Beauty, Panorama, Live Photo and there are toggle buttons for HDR and gesture shot. You also get filters and long pressing the shutter butter will activate burst mode.

We managed to get nearly an entire day's worth of usage with the relatively small 2200mAh battery capacity. In our video loop test, we clocked in 8 hours and 7 minutes of continuous video playback, which is not bad.

Verdict
It's not really clear why ZTE chose to launch this model now, especially when it has already shown of its successor at this year's Mobile World Congress. The Blade V6 is priced at Rs. 9,999 and is currently only available at Hotshot retail outlets in Delhi.

The nice design and decent battery life aside, there's really nothing else going for the phone to warrant a purchase. The dated software and security patch are two of its biggest flaws and are good enough reasons to avoid this altogether.

Smartphones like the Xiaomi Redmi 3s Prime (Review), Asus Zenfone Max (2016) (Review) and Le 1s Eco (Review) offer much better performance and feature for around the same or lesser price.