Share on Facebook Tweet Snapchat Share Reddit Email Comment
Lava International introduced the first device in the Xolo series in April 2012 with the launch of the Xolo X900. This was the first smartphone in the World to come with an Intel Medfield processor. However, the Rs. 22,000 price tag acted as a barrier, and the phone, even after getting a price cut and the Android 4.0 Ice Cream Sandwich update, did not do that well.

Intel recently unveiled the Intel Atom Lexington Z2420 chipset at CES 2013, paving the way for low cost phones powered by its mobile platform. The Xolo X500 is one of the first devices to feature this processor. The pricing at Rs. 8,999, is the icing on the cake. While there are plenty of phones based on Mediatek's chip that are feature packed and come in the same price range, we try to find out if Intel and Xolo have a winner this time.

Design/ Hardware
Of late, large screen smartphones are in demand following the success of the Samsung Galaxy Note. All domestic handset makers are channelizing their focus on addressing the segment flooding the market with multiple devices. The Xolo X500, however, is a welcome change sporting a 3.5-inch screen that seems just the right size. The back panel has a rubberised feel, which makes it comfortable to hold in the hands. 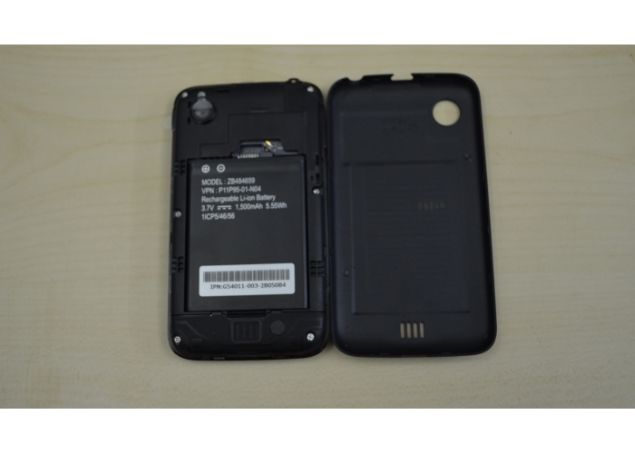 The smartphones has curved rounded corners. Most of the front is taken by the screen and there are four capacitive Android buttons - Back, Home, Application switcher and Menu for respective functions. There's Xolo branding on the top of the screen.

The side buttons are also embossed in the design. The left side of the phone houses the volume rocker while the right side has the power/screen lock key. The USB/ charging port and the 3.5mm headphone jack sit on the top of the phone. The back sports a 5-megapixel camera and speaker outlet. There's Intel and Xolo branding on the back.

The phone comes with a user replaceable battery unlike its predecessor, the Xolo X900. However, the slots for mobile SIM and microSD are crammed and one has to be careful while inserting the SIM card or microSD card.

Display
The Xolo X500 comes with a 3.5-inch screen with a resolution of 480x320 pixels, which is a little low and graphics and text appear to be less sharp. However, it is decent enough for casual use, watching YouTube videos or playing casual games. The screen is reflective, but we found that the viewing angles were pretty decent thanks to the IPS panel. The under sun visibility for this smartphone is average.

Software/ Interface
The Xolo X500 runs Android 4.0.4 (Ice Cream Sandwich), and on the surface, looks similar to the stock build of the OS save for a widget placed at the top of the notification bar which features toggles for Wi-Fi, Bluetooth, location, data sync and brightness. There are five customisable home screens that can be filled with app shortcuts and widgets. The phone does include a few pre-loaded apps including Xolo Care, Quick office, and doubleTwist, a multimedia playback and management app. Apart from the default Android browser, you'll find the Chrome browser bundled as well. 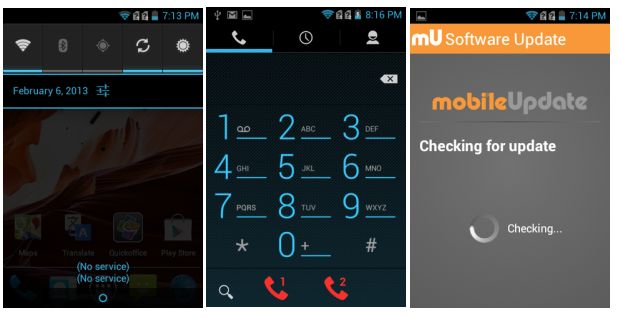 The Xolo Care application helps customers to contact the customer care service via SMS, email or phone call. There's also a SIM configuration utility since it's a dual-SIM phone that allows users to select the Active SIM. The phone also includes Swiftkey 3 for Intel, as the default keyboard although one can switch to the standard Android keyboard. The SwiftKey keyboard offers text predictions based on the user's usage pattern.

There are some other minor changes that have been made to first party apps. The phone app's dialling pad has separate call buttons for both SIMs so that users can choose the connection through which they'd like to make the call after keying-in the number. OS updates on the Xolo X500 take place through the MobileUpdate utility integrated with the phone settings.

We were able to use most popular apps including Facebook, Twitter, Instagram, WhatsApp and Foursquare, and games like Jetpack Joyride, Temple Run 2 and Angry Birds Star Wars. However, some popular games such as Subway Surfer and Shadowgun crashed as soon as we launched them.

The company has so far given no indication if this smartphone will get updated to Android 4.1 (Jelly Bean). Most Indian handset brands do not roll out Android updates for their existing Android smartphones but Lava had earlier rolled out an Android 4.0 update for the Xolo X900 and we hope that they update the X500 to run Jelly Bean.

Camera
The phone doesn't come with the stock camera app and instead there are two separate apps for Camera and Camcorder, although users can switch between the two by simply selecting the Mode from within either of the apps. The same button can also be used to take panorama and burst mode shots (7 shots at once). The camera app, otherwise, is pretty basic, offering just three effects (Sepia, Mono and Negative) options. Also, there's a separate button for invoking Zoom, after which the user can zoom in and out by using the pinch gesture. We feel that the solution offered is a little unintuitive. The phone doesn't have a flash, so it's almost unusable during the night or under extreme low-light conditions.

Performance /Battery Life
The XOLO X500 ships with Intel's Atom Lexington single-core processor that has a clock speed of 1.2GHz. It also has a Power VR SGX 540 400MHz GPU and 512MB of RAM. Although the phone is powered by a single-core processor, Intel's hyper-threading technology allows it to offer a good muti-tasking experience.

Our experience while navigating through the menu and playing some casual games was good. We did notice minor lag while playing some games but otherwise it performed better than other phones in the same price range. We were able to play 720p HD video files, and 1020p HD video clips on YouTube. We were not able to run .AVI videos natively, but that can be easily fixed by downloading third-party video players.

The phone comes with the native Android browser as well as Chrome and we found that it renders all webpages well. The phone doesn't come with Adobe Flash pre-installed. The speaker on the phone delivers good quality sound even at high volume levels. However, since the speaker is located at the back, the volume levels decreases when the phone lies on its back. Call quality was good with our voice being delivered loud and clear to the other party. The phone is a dual-SIM GSM phone with support for one active and the other in active-standby mode.

The Xolo X500 comes with a 1500mAh battery and we were satisfied with the backup that it offered. With mixed usage during the day, including playing games, a few calls, and e-mail and Twitter notifications turned on, we were able to get about one-and-a-half days of backup. The phone would easily give 7-9 hours of usage on a single charge. Although the battery's capacity isn't very large, we believe that the low resolution screen and Intel's processor help in optimizing the battery backup offered by the phone.

Verdict
At a price of Rs 8,999, the Xolo X500 is one of the better performing Android smartphones in this price-range. The only downer is the low-screen resolution, and some games being not compatible with the phone (likely due to the Intel processor). The lack of a flash might also bother some who'd want the ability to click photos during the night or in low-light conditions. Other than these factors, the phone offers a very decent package, especially at the price.

Other options that you can look at include the Sony Xperia Tipo,that also comes with a dual-SIM option. The Samsung Galaxy Music Duos is another dual-SIM option almost in the same price range, but we've not tested the phone, yet.If you're in the market for a phone with a large screen, then the Lava Iris 501 and Xolo A700( which is powered by an ARM-based processor) are also some of the other phones available in the Rs. 9,000 to Rs. 9,500 price bracket.

product The Xolo X500 is among the first phones to come with an Intel Atom Lexington processor. It's attractively priced at Rs. 8,999. Here's our review of the phone.