Xolo has recently started offering affordable quad-core smartphones under its 'Q series'. The first smartphone in this series was the Xolo Q800. Recently the company added the Q700 to the list. The Xolo Q700 is priced at Rs. 9,999 and runs on Android 4.2 (Jelly Bean).

In this review we try to find out whether this smartphone is a worth the bucks or has Xolo cut corners to deliver a sub-Rs. 10,000 offering.

Hardware/ Design
Xolo as a company is known for launching good looking smartphones such as Xolo X1000 and Xolo A1000. We were pleasantly surprised that the company did not comprise on the design and build quality for their under Rs. 10,000 smartphone either.

The Xolo X700 does not offer a path breaking design, sporting a rectangular frame with rounded corners. It comes with 4.5-inch qHD display, which has an edge-to-edge glass. The smartphone seems to be just the right size, neither too large nor too small. The device is 10.2mm thick, so it is not going to fit in the category of the size zero smartphones doing the round. The smartphone weighs 151.3 grams but does not feel too heavy. 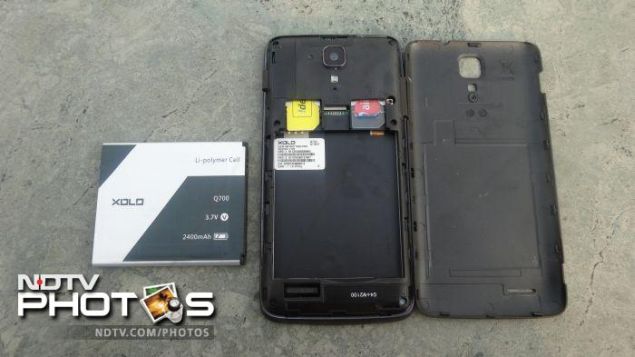 The body of Xolo Q700 is made primarily of plastic and its back has a rubberised finish, which helps in giving this smartphone a premium look and also makes it easy to hold.

The volume rocker is placed on the right panel while the power/ standby button is on the left panel. The top panel houses the USB port and 3.5mm jack. The front panel also has three capacitive buttons for Menu, Home and Back. However, these buttons are not backlit, which makes them difficult to use in dark.

The resolution and the viewing angles are good for a smartphone worth Rs. 10,000. You can easily read texts, browse pictures and watch YouTube videos on this screen. Under sun visibility on the Xolo Q700 is average and the screen used in this smartphone is reflective. The downside of this screen is that it is a finger print magnet and even prone to scratches. However, the company has bundled in a screen guard along with the purchase of this smartphone.

The touchscreen on the Xolo Q700 is fairly responsive.

Camera
The Xolo Q700 packs in a 5-megapixel rear camera with Back Side Illumination (BSI) sensor. The pictures captured through this camera in the broad day light are good. The images are sharp and the colour reproduction seems to be good. 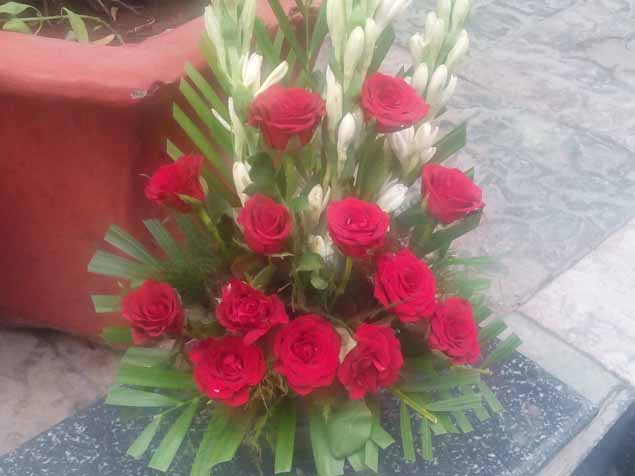 However, the same cannot be said for the low-light shots. The camera is also capable of capturing videos at 720p HD resolution, which are of average quality.

The smartphone also comes with 0.3-megapixel front camera for capturing self-images and doing video chats. The images clicked through the same are grainy.

Software/ Interface
The Xolo Q700 runs on Android 4.2 (Jelly Bean) out of the box. Hence, one can enjoy many features such as lock screen widgets, Day dream, Quick Settings, et al, which are not available on Android 4.1 (Jelly Bean). 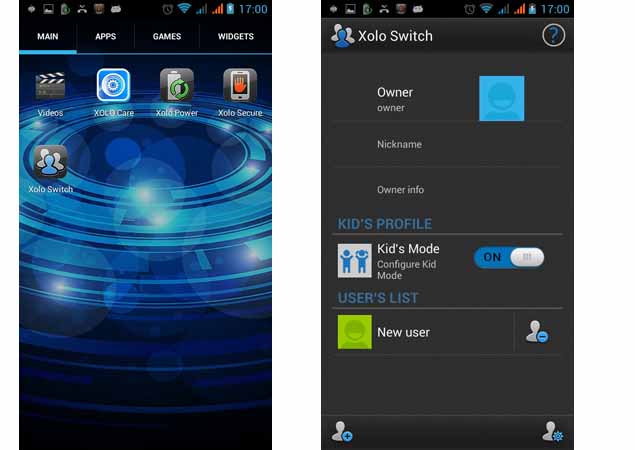 There are five customisable home screens to fill with apps and widgets. The lock screen and the setting menu of the Xolo Q700 looks pretty much like on any other stock Android smartphone. However, the app categories on this smartphone have been tweaked slightly. The apps are listed under four major heads Main, Apps, Games and Widgets, as opposed to having just two main categories for Apps and Widgets.

The company has not pre-loaded many apps on this smartphone but one can download all that you need from the Google Play store. Xolo has bundled in some of its own apps such as Xolo Care, Xolo Power, Xolo Secure and Xolo Switch on this smartphone.

The Xolo Care app was also pre-installed on some of the previous Xolo smartphones that we have reviewed. Its primary function is to help access the customer care in a jiffy. However, the apps Xolo Power and Xolo Switch have been introduced for the first time with this smartphone.

With the help of the Xolo Power app you can manage the battery of the Xolo Q700 in a better fashion. The Xolo Power app gives an estimated battery back that the user will get based on the applications that are currently running. It also suggests the battery you can save by cutting one or more apps or connectivity options. The app also comes with a 'Low battery mode'. If you enable this mode, then the smartphone will disables Wi-Fi, data GPS, Bluetooth and reduces screen brightness to converse battery, when the battery is about to drain off. 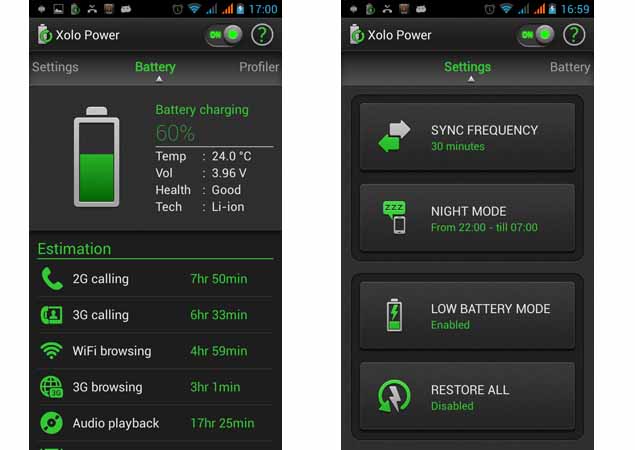 With the help of the Xolo Switch app, you can create multiple profiles on the smartphone and easily switch between them. The app also comes with a kid mode, which can be switched on.

Performance/ Battery Life
The Xolo Q700 is powered by a 1.2GHz quad-core MediaTek 6589M processor with PowerVR SGX544 GPU. The smartphone also packs in 1GB of RAM and 4GB of internal storage, out of which 2.70 GB is user accessible.

The smartphone functions smoothly while performing routine tasks and navigating through menus. The smartphone is also capable of handling a bit of multi-tasking. Playing popular games such as Subway Surfer, Temple Run 2 and Fruit Ninja is a pleasant experience. 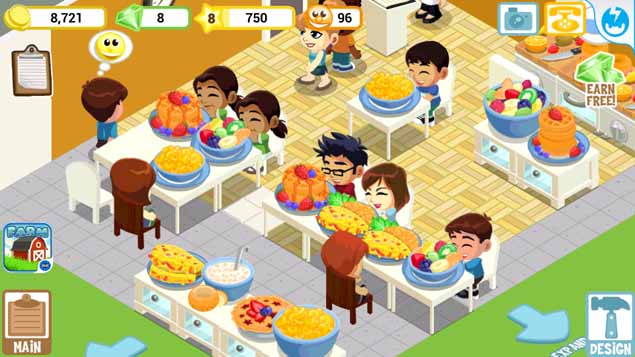 The Xolo Q700 is also does a good job playing back audios and videos from the microSD card. The audio quality through speakers is good but average through headphones. The native video player on board did not support MP4 videos. However, this problem can be fixed by downloading an app from the Google Play.

The call quality on the smartphone is satisfactory.

The smartphone features a 2,400mAh battery, which we think gives an impressive battery backup. Based on our usage, the smartphone is easily able to last almost a day and half on a single charge. With medium to heavy usage, including 2-2.5 hours of phone calls, about 30 minutes of Skype call, one Gmail account with push notifications, screen at maximum brightness, Twitter and Facebook notifications and WhatsApp chats, the Xolo Q700 lasted good 30-31 hours.

It's also worth pointing out that we had turned on Wi-Fi and switched off auto-brightness. Altering these settings and using the Xolo Power app might help in running the phone for a longer duration, depending on your usage pattern. 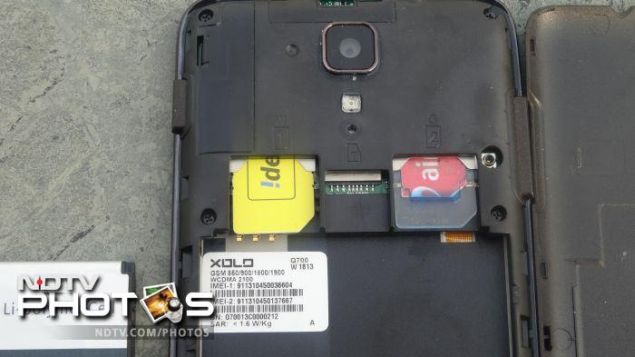 Verdict
In our mind the Xolo Q700 is a great value for money proposition. The smartphone offers a good battery backup, looks sophisticated for a Rs. 10,000 phone and has a decent display. The only real disappoint for this smartphone comes from the camera department, which does not perform too well especially in low light.

If you are looking for options other than the Q700, you might want to check out the Sony Xperia E dual (Review | Pictures). This smartphone has a better brand name but you will have to comprise in screen size and battery performance.