The Indian smartphone market is now flooded with offerings from Indian manufacturers along with premium brands. Companies such as Xolo, Lava, Micromax, Karbonn and Spice are on a roll with new launches coming each week.

These brands seem to be taking over the budget end of the market, and consumers are now used to seeing them everywhere. However, Xolo is trying to establish itself as a premium smart devices brand, distinct from its parent company Lava. This time around, Xolo has sourced its processors from Broadcomm, which allows them to offer a quad-core model at a low price. The Xolo Q1000 Opus just about manages to squeeze in under Rs. 10,000 with an MRP of Rs. 9,999.

The Q1000 Opus looks great on paper and we had a chance to review it. Let's find out how it performs in reality. 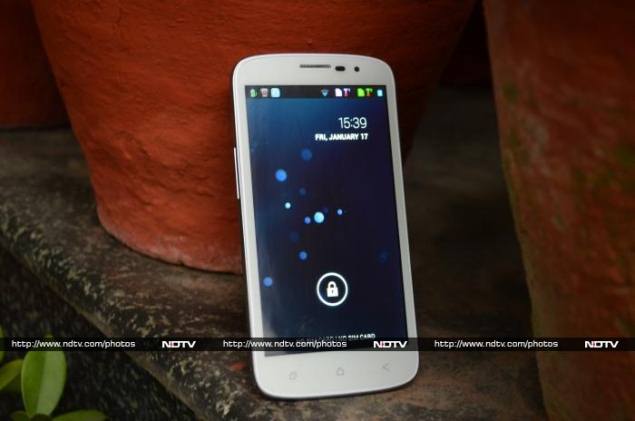 The front of the Xolo Q1000 Opus features a 5-inch display, with a sensor array near the earpiece grill alongside a 0.3-megapixel (VGA) front-facing camera. The three backlit capacitive touch buttons, namely the menu, home and back keys, are located below the display.

The Q1000 feels as bulky as any other 5-inch smartphone, but its thin bezels make it 4mm less broad than the Galaxy Grand. The body is completely plastic and prone to fingerprints all over because of the glossiness. The overall look is similar to any other candybar smartphone you see nowadays. You also get a bundled flip-case with the device which will help keep it safe from scratches. The case doesn't automatically put the phone to sleep or wake it up, like some other smart cases do.

The loudspeaker grill is at the bottom of the glossy back panel, while the 5-megapixel camera with BSI sensor is located above it, complete with LED flash. You can see Xolo's branding on the back, but nowhere else on the phone.

The volume rocker keys are on the left edge and the power/ lock button is located at the right of the Q1000 Opus. A 3.5mm headset jack is located on the top edge, and a Micro-USB port for computer connectivity and charging is located on the bottom edge.

At first you see a bright display with good contrast. It is glossy and very reflective, so it's also prone to fingerprints. The viewing angles on the Q1000 Opus are not great and you will have a bit of trouble with viewing angles outdoors, even with the brightness set to full.

Apart from that, the display is decent to look at, with a high contrast and decent brightness. Text is clean and sharp, so there is no problem there. The display reproduces colour well and had good deep black levels. However, when it comes to watching videos, you will see pixellation due to the low resolution.

Overall, the Xolo Q1000 Opus has an average display, which should have been better considering Xolo wants to be a premium brand. 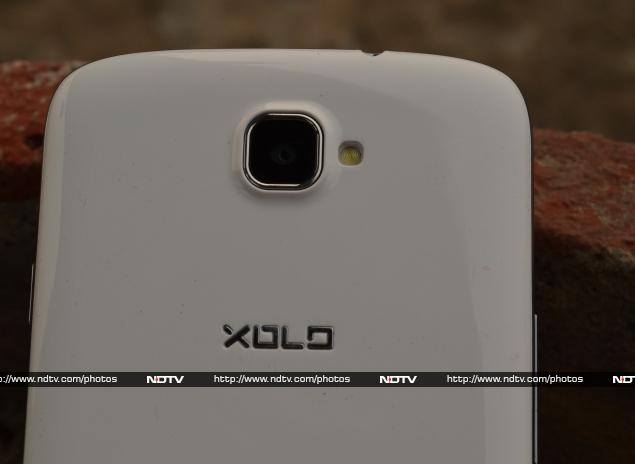 Xolo Q1000 Opus sports a 5-megapixel rear camera with LED flash and also includes a 0.3-megapixel front-facing camera. There is no dedicated camera key for quick access and you cannot customise the volume keys for shooting pictures or for zooming.

The Q1000 Opus comes with the stock Android camera app, with minimal settings to play around with for still as well as video capturing. Features like burst mode, self-timer, focus mode, colour mode and face-detection will come handy while taking pictures. You'll need an additional camera app if you are looking for better effects and filters.

The camera on the Q1000 Opus takes below average quality images for a 5-megapixel unit. Pictures taken in daylight initially had a lot of white fringing and were pretty awful. During the course of our testing, the company put out an update specifically related to the camera app. Images taken after the update were still not all that good, but at least the fringing problem was addressed. We hope the company will fix this issue completely with another update. Pictures taken indoors with the Xolo Q1000 Opus camera had similar problems.

The camera records 720p HD videos and the quality here too was not up to our standards. Ambient sound was picked up pretty well.

The 0.3-megapixel front-facing camera has the same while balancing problem as that of the rear camera. Overall, the cameras on the Q1000 Opus remain sub-standard. Those who are specifically looking for a decent camera in their smartphone should avoid the Q1000 completely. 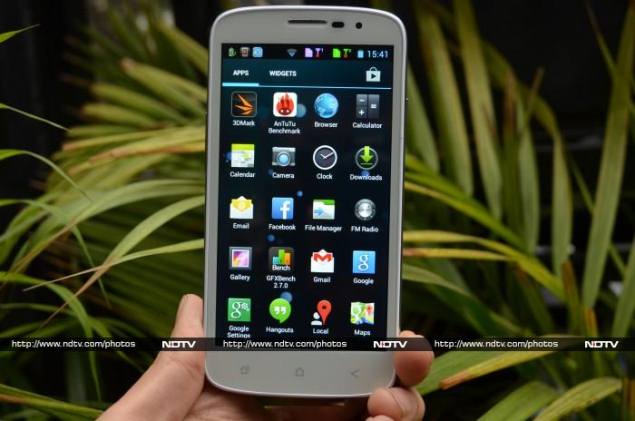 The Xolo Q1000 Opus runs on Android 4.2.2 Jelly Bean. The interface on the device is the same as the stock Jelly Bean UI, with almost no changes by the company.

The lockscreen on the device is same as that of a stock Jelly Bean phone. You can directly access the camera and add four widget panes.

The interface is therefore quite simple, with no gimmicks, and you soon get the hang of it. Xolo hasn't pre-installed many apps on the device, apart from their Xolo Care, Xolo Power and Xolo Secure apps.

Xolo Care lets you connect to the company's customer care team via text, call or email. It also lets you check and update the software, which you would otherwise do from the settings.

Xolo Power is a basic battery health monitoring app which shows how much time is left for various tasks such as audio playback and 3G browsing etc. Tabs in the app give you quick access to battery saving features such as a night mode, low battery mode and sync frequency. One other tab tells you about the current CPU activity.

Xolo Secure is an anti-theft and security app that lets you remotely track your phone, make it sound an alarm, wipe out all personal data, and take photos of anyone who tries to unlock it. If the phone's SIM card is changed, the app will send alerts to up to two preregistered numbers and your email address. The app itself can be locked down with a 6-digit PIN. Finally, while Google automatically backs up contacts, the app promises to also back up your SMS and call history databases.

Performance and battery life
The Xolo Q1000 Opus is powered by a quad-core 1.2GHz Broadcomm BCM23550 chipset, along with 1GB of RAM. This is the first device by Xolo since it partnered with Broadcomm. The term "quad-core" has become a selling point, and we now have multiple such devices under Rs. 10,000 in the market. Some of them were launched at higher prices but are now selling below the Rs. 10,000 mark. Thus, Xolo has a number of competitors to beat.

Talking about the smoothness of the device in terms of usage and multitasking, it didn't impress us. It did lag a little, which we were not expecting from the quad-core processor.

Surfing the Internet on the Q1000's native web browser was pretty decent, with quick page rendering. We also had no trouble with pinch-zooming and touch selection. Videos loaded fine with little bit of pixellation, which is normal for a budget-priced phone.

Games like Temple Run 2 and Subway Surfer played very well and the device didn't heat up during continuous gameplay.

The Q1000 Opus includes 4GB of inbuilt storage, out of which only 1.68GB is available to the user. It supports expandable storage up to 32GB via a micro-SD card.

The phone supports dual (GSM+GSM) SIM cards. Call quality and headset speaker volume on the device were decent both indoors and outdoors. 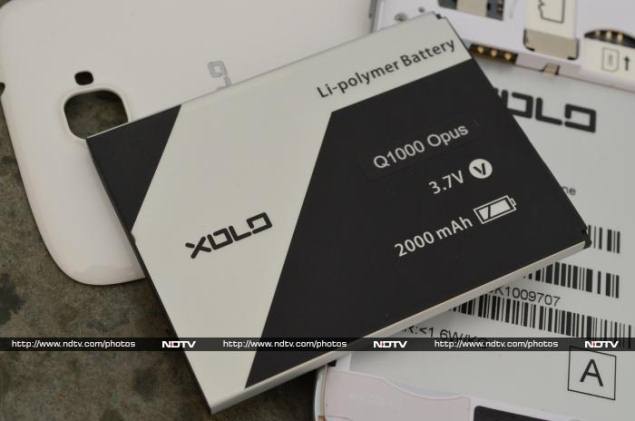 The phone packs in a 2000mAh battery that according to the company will provide up to 18 hours of talktime on 2G and upto 11 hours on 3G. It easily lasted a day with average usage with the brightness set to 50 percent, Wi-Fi running in the background, and push notifications from Whatsapp and Facebook enabled. We also put it through a video loop test to determine the exact battery runtime, and it did pretty well, lasting 6 hours and 39 minutes.

The quality of audio on the Xolo Q1000 Opus headphones is average and the output via loudspeakers is not that bad either.

Verdict
The Xolo Q1000 Opus is a 5-inch budget smartphone with a quad-core processor and 1GB of RAM. It is priced at Rs. 9,999 by the company, but the market price for the device at the time of the review was between Rs. 8,500 and Rs. 9,000. The phone is mostly capable when it comes to multitasking, and is good for the price in terms of look and build quality.

The camera is the main drawback of the Q1000 Opus. If you are willing to extend your budget slightly then we would suggest the Lava Iris 504Q. If you are not able to extend the budget at all and are not too picky about the brand, you could look at the Zen Ultrafone 701HD, which is now available around Rs. 8,500 and offers better overall performance.

If you are looking for a capable smartphone in the same price range and don't mind the Windows Phone 8 platform, the Nokia Lumia 520 is a great option, offering better build quality, overall user experience, and camera quality.