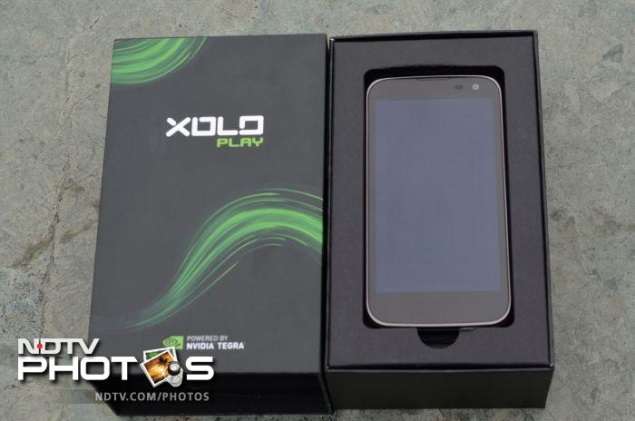 Xolo, which makes budget Android smartphones, announced itself with a bang with first Intel-powered smartphone in the world. After launching a few other Intel-based phones, it launched Mediatek processor based dual-core phones under the A series and quad-core phones under its Q series.

With the Xolo Play T1000, Xolo becomes the first Indian OEM to sell a phone featuring Nvidia's Tegra 3 processor and is touting the device as a gaming smartphone.With this, Xolo now offers phones based on different hardware across its various product lines. But does the company do enough to carve a niche for itself in a very competitive smartphone market? We find out in this review.

If you are among the few who insist on being seen with the snazziest looking device in town, the Xolo Play will disappoint you.The phone measures 70x138.4x10.4mm and weighs about 167 grams.The design of the Xolo Play is simple, with no hardware buttons on the front panel. However, the device has good build quality and doesn't feel plasticky.

The front of the phone is dominated by an all-glass panel that extends right to the edges. Circling the front edge is a thin chrome strip that adds to the aesthetics of the smartphone. There are three capacitive buttons for Settings, Home and Back,which are backlit, but a little too dim than usual. The rear panel is rubberised and helps in offering a good grip. 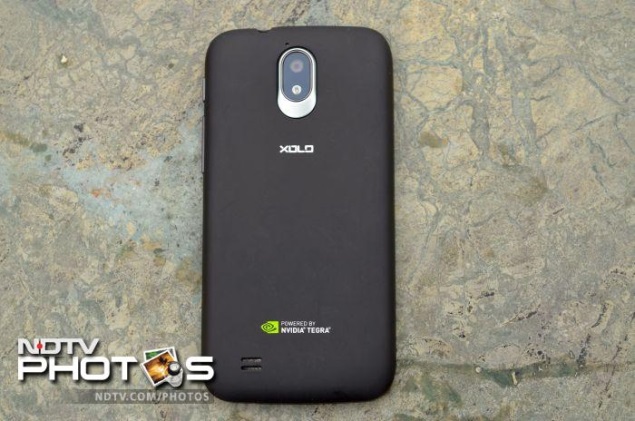 The button placement on the Xolo Play is similar to other Android smartphones in the segment. The right edge has the volume rocker and the power/ lock button, though we wished it could feature a dedicated camera button, as well.The top panel has the headphone jack and the Micro-USB slot, while the left is barren with no keys,and the bottom edge features the microphone.We felt that the positioning of the power/ lock button above the volume rocker key was a trifle odd as we often ended up pressing the volume rocker button when we wanted to unlock the device.

Just above the display, we have the earpiece grill, with the front-facing camera located to the right.The back of our Black Xolo Play sports the rear-camera lens in the centre, right above the LED flash and both are enclosed in a metallic frame.A Xolo logo sits in the middle, with the bottom part featuring Nvidia Tegra branding embossed along with the speaker grill at the bottom-left corner.

The back panel can be opened using a small crevice on the bottom right corner of the phone. Removing the panel reveals the 2000mAh battery covering the slots for the SIM cards, which are of regular size and the microSD card.The battery needs to be removed to access the SIMs and the memory card.

The overall design of the Xolo Play is not an eyesore but is definitely not designed to turn heads and looks rather plain.

The Xolo Play comes with a 4.7-inch HD display of 720x1280 pixels resolution with One Glass Solution (OGS) Technology, translating to a density of 312 pixels per inch. While that doesn't sound impressive when compared to some high-end Android smartphones, the real life experience is decent. 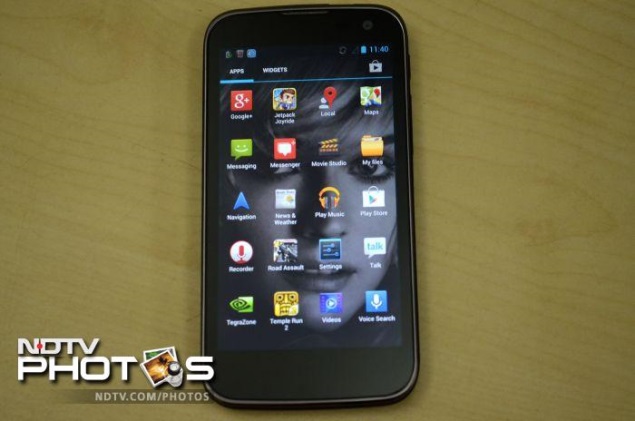 Under sun visibility on the Xolo Play is above average at full brightness levels and the screen used in this smartphone is reflective. Colour reproduction and viewing angles on the IPS display are not that bad. We observed that the display of the smartphone picked up smudges easily and is also a fingerprint magnet, we had a tough time getting rid of them.

Overall, while we sure wish the Xolo Play came with a full-HD display, we had no qualms about the quality of this one.

The Xolo Play sports an 8-megapixel rear camera with BSI (Back Side Illumination) Sensor accompanied by an LED flash. The camera app on the device is stock and does not feature many additional options. The images clicked with the phone were not the sharpest and colours at times,seemed just a bit washed out.We found the details in the images and noise well under control,when there's plenty of light. However, the same cannot be said for the low-light shots. 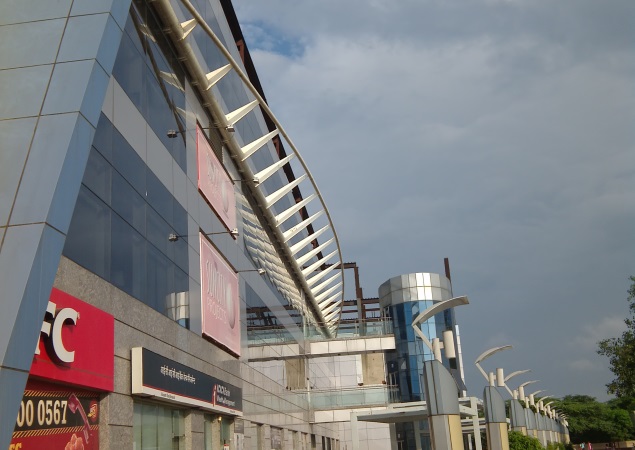 The camera is also capable of capturing videos at 720p HD resolution and even full-HD resolution, though the videos turned out to be of average quality. One can also click images while taking videos.The camera software lets you tweak a few settings for still pictures like Scene mode (Auto, Night, Sunset), ISO, White Balance, Face-detection and Focus Assist Light. There's no Panorama mode. 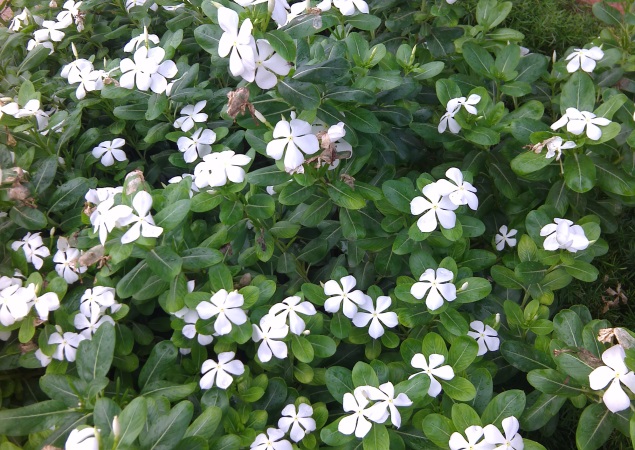 There is a 2-megapixel front camera, as well. The front camera is good for video chats and for clicking self-portraits and the quality is nothing to be written home about.

That said,the Xolo Play packs in a fair deal in terms of software.The basic Android interface has not been tampered with much, although the absence of hardware keys means that you will have to depend on three soft buttons below the display which light up whenever the display is in use to find your way around, with the Home button also doubling up as an app switcher on long press.The lock screen and the settings menu of the Xolo Play looks pretty much like any other stock Android smartphone. 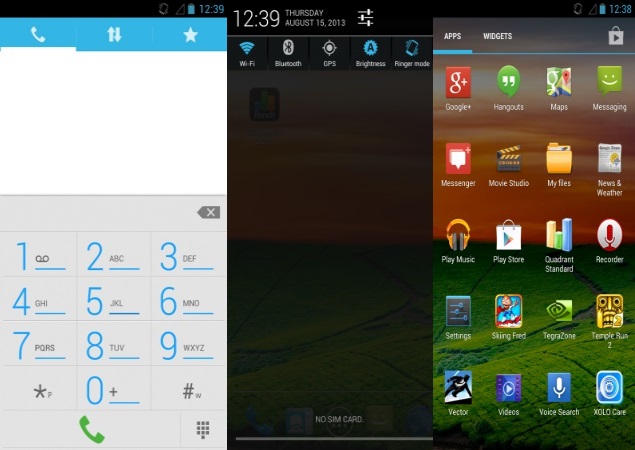 Similar to most other Android devices, there are five customizable home screens on which you can drop widgets and app shortcuts.

The notification tray includes toggles for settings such as Wi-Fi, Brightness, Rotation, Bluetooth, GPS, Data, Screen timeouts and profiles (for alerts and other notifications).

The notification tray also features a shortcut for settings and a clear all notifications shortcut, along with expandable notifications (expanded with the two finger pull gesture). Android 4.1 Jelly Bean also brings in Google Now, the handy virtual assistant.

The Xolo Play comes with the usual Android goodies like Gmail, Google Maps and Google Talkin addition to some bundled apps like a file manager, a video player and a profile manager. The device comes with few other pre-loaded applications such as Facebook, News and Weather.One of the biggest advantages of the Nvidia chipset is the access to Nvidia's Tegra Zone that offers a number of apps and games optimised for the Tegra-powered devices.Of course, you can always head over to the Google Play Store to get more apps.

The company has also bundled some of its own apps like Xolo Care, Xolo Power and Xolo Secure on the Xolo Play. These apps were also found on previously launched Xolo smartphones.The Xolo Care app lets you contact customer care. 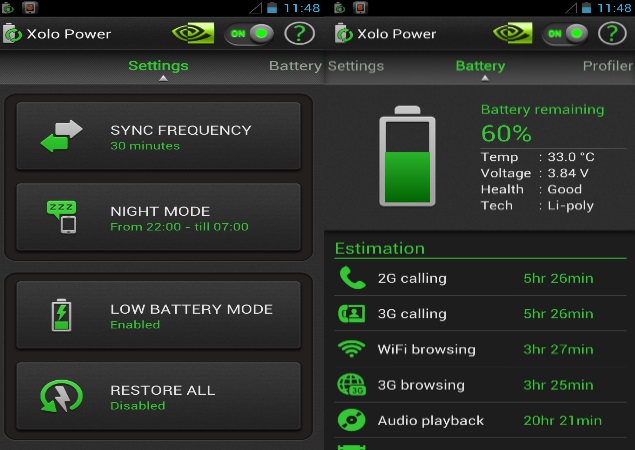 The Xolo Power app can help manage the battery of the smartphone. It shows the estimated battery backup time that the user will get based on the applications that are currently running. It also gives options to kill apps.It also offers a 'Low battery mode' that disables Wi-Fi, cellular data, GPS, Bluetooth and also reduces screen brightness to conserve the battery, when the battery is about to die.Xolo Secure let you track and lock the smartphone in case its lost.

The highlight of the Xolo Play T1000 is its 1.5GHz quad-core NvidiaTegra3 processor with a 5th low-power core which is accompanied by a 12 Core Nvidia ULP GeForce.

The smartphone also packs in 1GB of RAM and 4GB of internal storage, out of which only 2.3GB is user accessible. However, one can expand the storage up to 32GB with the help of a microSD card.

Without any doubts,the Xolo Play's specifications sound quite acceptable on paper. But unfortunately, the same is not the case in real life performance. We found the smartphone lagging in launching some apps. Admittedly, the lag is not that consistent but considering that an Nvidia quad-core processor backs the smartphone, it is quiet disappointing. 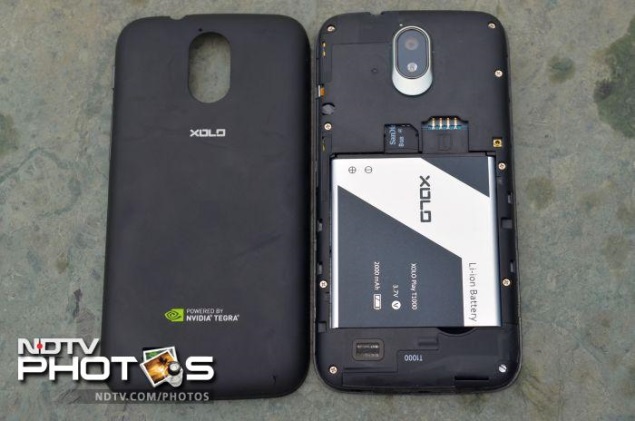 The company is promoting the device as a gaming smartphone and we found the Xolo Play performs quite well in that department.

Call quality on the Xolo Play was also decent.We were able to play full-HD clips, with all formats including MOV and AVI being supported natively.

The Xolo Play comes with a 2000mAh battery, and in our usage, it would last a full day. We charged the smartphone in the morning, and with medium to heavy usage, including an hour of phone calls, two email accounts configured, listening to some music, long hours of gaming (Temple Run 2, Skiing Fred, Vector and Shadowgun), taking some casual photographs and chat notifications, the phone lasted for 12-13 hours.It's worth pointing out that we had turned on Wi-Fi and auto-brightness, and the phone was also hooked to a 3G network with normal browsing. Changing these settings may help in increasing the phone's battery life, depending on your usage pattern.

The Xolo Play is a phone that does the job without really excelling in any particular aspect. It has decent performance, about average battery life and a fairly stock Android experience. However, like most Android smartphones in the price range, the camera is mediocre. But the biggest disappointment is the fact that it Is still running Android 4.1, when Android 4.3 is out and most competitors sport Android 4.2. Worse, there is no upgrade path in sight.

If you are looking for alternatives, consider the Zen Ultrafone 701 HD or the Karbonn S5 Titanium. For non-Android options, you can look at the Nokia Lumia 620. All three phones are available at a discount compared to the Xolo Play. If you can stretch your budget a bit, look at the excellent Nokia Lumia 720.