Redmi Note 6 Pro is the successor to the Redmi Note 5 Pro but is it any good? Read on

The Redmi Note 6 Pro is here and it has some big shoes to fill. Xiaomi's success has been built upon a simple formula: offer powerful hardware at aggressive prices to undercut the competition. One recent example of this strategy was the predecessor to the Redmi Note 6 Pro. With the Redmi Note 5 Pro, the Chinese manufacturer has been very hard to beat around the Rs. 15,000 price mark thanks to the use of the Snapdragon 636 SoC. The device has been extremely popular, so naturally, that increases the expectations we have from its successor, the Redmi Note 6 Pro.

Xiaomi seems to be playing safe and has retained the same Qualcomm Snapdragon 636 processor. What is different now is that the Redmi Note 6 Pro gets a notched display and dual cameras on the front as well as the back. Can the new Redmi Note 6 Pro be as successful as the phone it replaces? We put it to the test to find out.

In terms of size, the Xiaomi Redmi Note 6 Pro is roughly similar to its predecessor, the Redmi Note 5 Pro (Review). In fact, if you place the Xiaomi Mi A2 (Review), Redmi Note 5 Pro, and Redmi Note 6 Pro next to each other and face down, you won't be able to distinguish between them easily. The vertical dual camera setup protrudes slightly and does not let the phone rest flat when lying on any surface. The camera module also houses an LED flash. A metal backplate sits over the plastic frame of the smartphone.

However, from the front, the Redmi Note 6 Pro stands out, primarily because it has a bigger display with a notch at the top. This notch is bigger than the one on the Redmi 6 Pro (Review), Xiaomi's first smartphone with a notch in India.

Xiaomi has positioned the power and the volume buttons on the right. The power button is easy to hit, but the volume buttons need a bit of a stretch to reach. All buttons offer solid feedback. On the top, this phone has a 3.5mm headphone jack, a secondary microphone, and an IR emitter which can be used to control appliances . At the bottom, there's a Micro-USB port which is a little disappointing, considering that other phones in this price range such as the Nokia 6.1 Plus (Review) and the Motorola One Power (Review) sport USB Type-C ports. There are grilles on either side of the Micro-USB port but only the one on the right houses a loudspeaker. 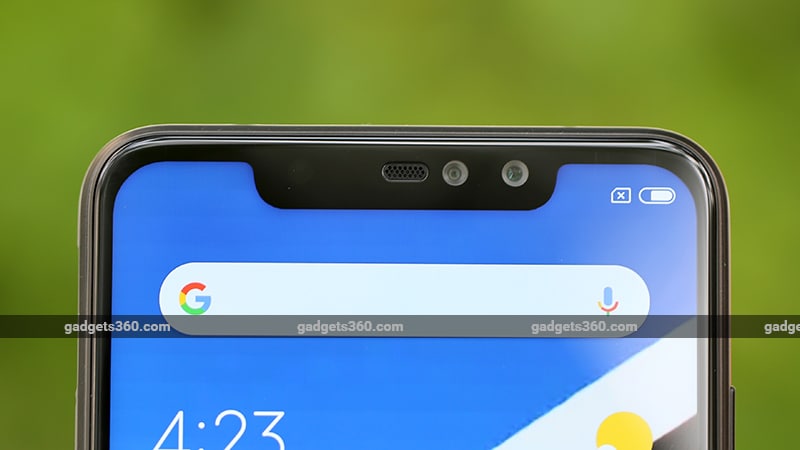 Xiaomi has opted to go for the Qualcomm Snapdragon 636 processor to power the Redmi Note 6 Pro. Why fix something that isn't broken, seems to be the theme here, as this is the same processor that powered the Redmi Note 5 Pro. You'll also find this SoC inside the Nokia 6.1 Plus, Asus ZenFone Max Pro M1 (Review), and Motorola One Power. This chip has eight Kryo 260 CPU cores clocked at 1.8GHz, split up as four ‘performance' cores and four ‘efficiency' cores.

This phone also has support for Qualcomm Quick Charge 3.0 but Xiaomi only ships a 10W charger in the box. You can buy a quick charger separately to enable fast charging. Just like the Xiaomi Poco F1 (Review), the Redmi Note 6 Pro also gets a water-resistant P2i coating.

Just like most other Xiaomi smartphones, the Redmi Note 6 Pro runs the company's custom MIUI skin. You get the latest version, i.e. MIUI 10, based on Android 8.1 Oreo. With the competition already pushing out updates to Android Pie, Xiaomi could have launched the Redmi Note 6 Pro with the latest version of the OS. Our review unit was running the October security patch which is fairly recent. 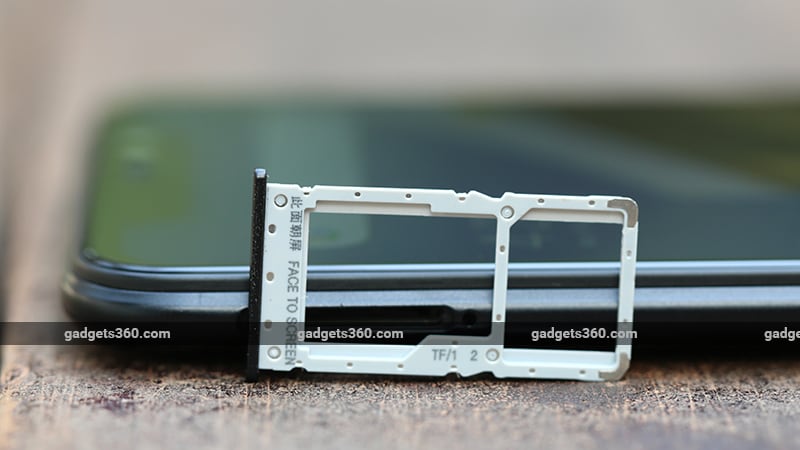 Xiaomi's custom UI has a few visual tweaks such as a new app switcher layout that looks fresh. You still don't get an app drawer, and all app icons appear on the home screens when installed. Like most other smartphones with notches, you have the option to mask the notch with a black band. You also get theme support so you can customise the look of the smartphone.

Xiaomi preinstalls quite a number of apps including Google's entire suite, Mi Drop, Cleaner, UC Browser, Mi Remote, Mi Store, Mi Community, Amazon Shopping, Facebook, NewsPoint, and Dailyhunt plus a few others. During our review period, we had Dailyhunt and Mi Video constantly spamming us with notifications.

A swipe to the right from the first homescreen gives you card-style updates, shortcuts for apps, and widgets for things like stock prices, and checking train PNR numbers. There's even a panel for Ola that opens the app if installed or redirects you to the company's webpage to let you call for a cab. You also get calendar reminders here and shortcuts for Swiggy, Redbus, and BigBasket. We found ads in apps including Mi Music and Mi Video, which got really annoying. (Take a look at our tutorial on how to get rid of these ads permanently).

There are gesture shortcuts on the Redmi Note 6 Pro which let you take a screenshot or launch the camera app. You also get the option to switch to fullscreen gestures instead of the on-screen Android navigation buttons. We found a new Enterprise mode that, from the looks of it, lets you create a separate enterprise profile. The Redmi Note 6 Pro shows you a list of fullscreen-compatible apps and gives you the option to force non-compatible apps to run in fullscreen mode.

Our Xiaomi Redmi Note 6 Pro ran perfectly without any lag or stutter, which might have been helped by the 6GB of RAM in our device. It could multitasking easily without having to kill apps in the background. The Qualcomm Snapdragon 636 isn't an old processor and is capable of running most apps and new game titles. We played PUBG Mobile which ran at the lowest settings, but managed to deliver a playable experience without any stutter. The phone did get slightly warm to the touch after playing the game for a while.

We ran a few benchmarks on the device to gauge performance and the scores were not significantly different than those of the Xiaomi Redmi Note 5 Pro. In AnTuTu, the Redmi Note 6 Pro managed 115,880, and it also scored 1,326 and 4,866 in Geekbench 4's single-core and multi-core tests. The phone managed 34fps and 9.7fps in the T-Rex and Manhattan 3.1 tests respectively in GFXBench. In 3DMark, it scored 946 in Slingshot Extreme OpenGL. 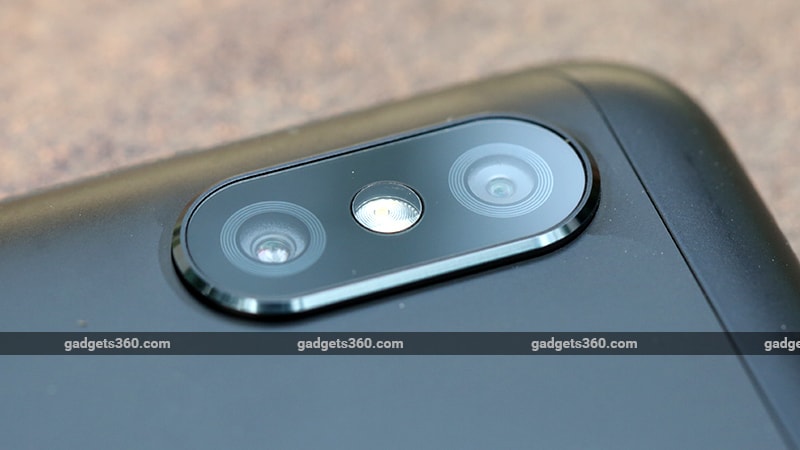 The battery capacity has remained unchanged for the Redmi Note 6 Pro as well, and in our HD video loop test, the phone went on for 15 hours and 36 minutes. This is exactly an hour less than the Redmi Note 5 Pro, which could be attributed to the slightly larger and brighter display. With our usage, which consisted of an active WhatsApp account, over 2 hours of navigation using Google Maps, and about 25 minutes of PUBG Mobile, the Redmi Note 6 Pro lasted us for over a day without any issues. If your usage isn't as heavy as ours, the phone should be able to last longer.

Xiaomi has retained the 12-megapixel + 5-megapixel rear camera configuration from the Redmi Note 5 Pro. The 12-megapixel sensor, however, is new, and has a 1.4 micron pixel size and dual-pixel autofocus. It has an f/1.9 aperture which should help it pull in more light compared to the Redmi Note 5 Pro, which had an f/2.2 aperture. The secondary 5-megapixel depth sensor is used when taking portrait shots with a depth effect. At the front, this phone also has a 20-megapixel selfie camera and a 2-megapixel depth sensor. The primary sensor here uses a 4-in-1 pixel binning method to have an effective pixel size of 1.8 microns.

AI is the buzzword nowadays, and Xiaomi claims that AI scene detection is built into the camera app on the Redmi Note 6 Pro. As per Xiaomi, the rear cameras are capable of recognizing 32 scenes, while the selfie camera can recognise 12 scenes using AI. The camera app is similar to what we have seen on most Xiaomi phones, with the addition being an AI toggle for both the primary and selfie cameras. 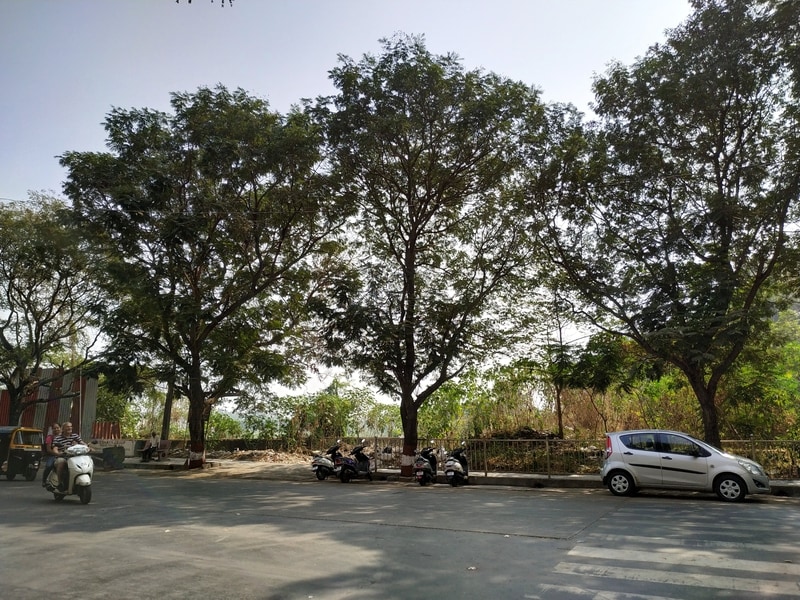 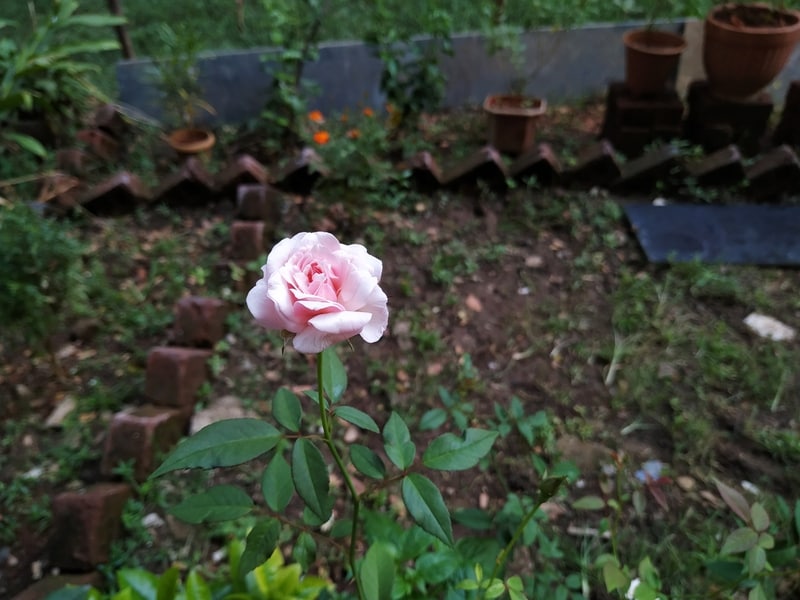 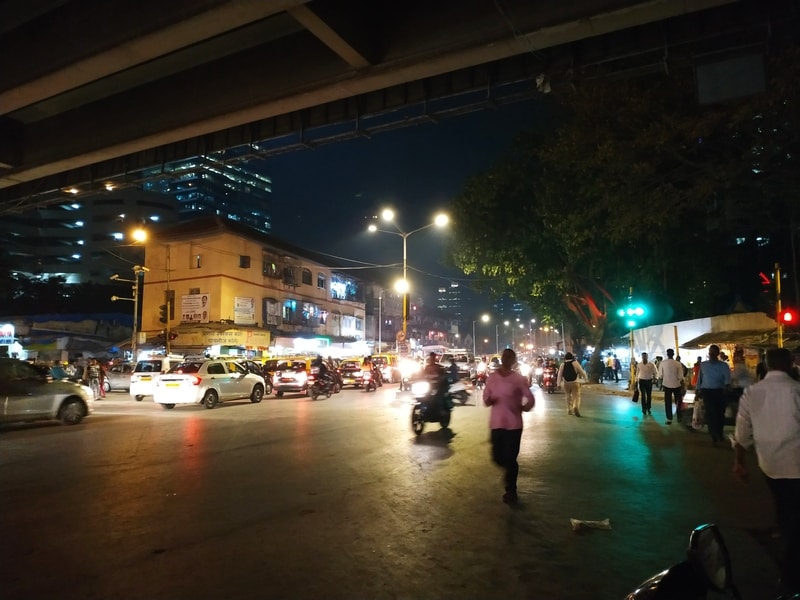 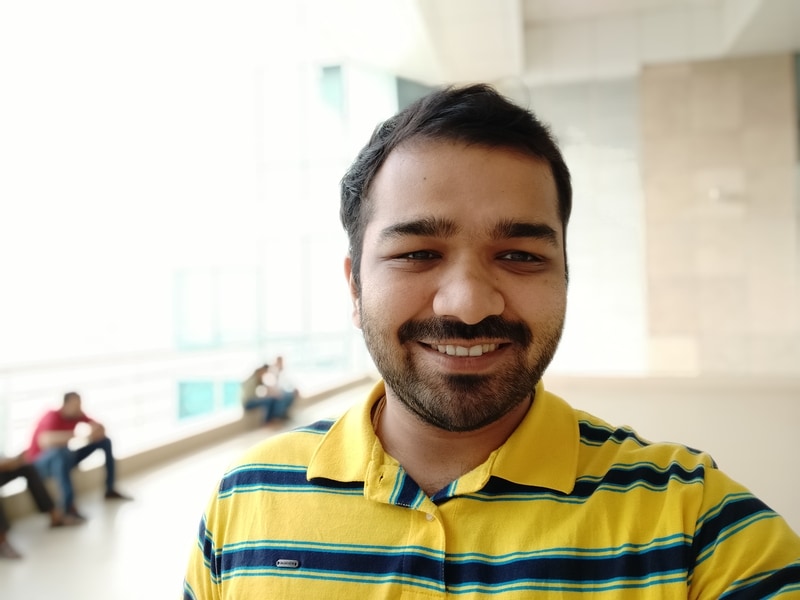 Landscape shots had decent details and the phone managed to get the exposure right. If you zoom in at 100 percent you will see some loss in detail. Auto HDR is available and kicks in automatically when required. The Redmi Note 6 Pro did manage to surprise us when taking macros. It managed good separation between the subject and the background. We also put the AI camera feature to the test, and found that the phone could detect what it was pointed towards.

When shooting portraits, the phone managed good edge detection. Once a shot is taken, you get the options to adjust the level of blur, add light trails, and adjust studio lighting. We found that the edge detection while using studio lighting isn't consistent. In low light, the phone lowers the shutter speed to capture more light so you might notice some blurring if your subject is moving. When you don't have a light source nearby, the photos aren't as sharp and lack a lot of detail.

Selfies taken with the Redmi Note 6 Pro had good details, and Auto HDR also kicks in if required. You have the option to enable beautification which smoothens the output. An advanced mode that lets you fine-tune different parameters for beautification. We liked the edge detection in portraits taken with the selfie camera. Video recording on the Redmi Note 6 Pro maxes out at 1080p which is disappointing, considering that other smartphones in this price range are capable of 4K video recording. There is EIS to stabilise footage but it causes a shimmering effect in videos. 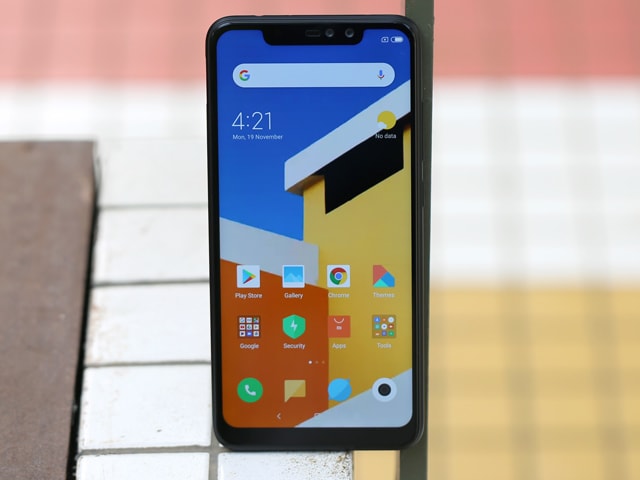 Verdict
The Xiaomi Redmi Note 6 Pro is the successor to the Redmi Note 5 Pro and has a few upgrades over the model it replaces. The notched display on the Redmi Note 6 Pro is bigger and brighter, and the cameras have also been upgraded, which does result in better output. Xiaomi has improved slightly on a product that was already good, and the refresh was necessary because competition has now caught up with Xiaomi, in the form of the Nokia 6.1 Plus (Review) and Asus ZenFone Max Pro M1 (Review).

Ads have been an issue with MIUI for a while, but things are now at a stage where they are starting to impact even basic day to day usage. Combine it with the fact that MIUI 10 on the Redmi Note 6 Pro is based on Android 8.1 Oreo, and you have a software experience that lags behind the competition.

Xiaomi's aggressive pricing gives the base variant of this new phone a good chance against the current lineup of best phones under Rs. 15,000. However, the higher-specced version of the Redmi Note 6 Pro is priced at Rs 15,999, which is closer to the Xiaomi Mi A2 (which runs stock Android), and squarely against the Realme 2 Pro (Review). Both those models use the more powerful Qualcomm Snapdragon 660 SoC. There's also the Motorola One Power (Review) with its 5000mAh battery to consider. That means that while the base variant of the Redmi Note 6 Pro is a good deal, there are better options available if you are looking at the higher-end variant.