Wickedleak is an Indian smartphone company that we'd like to imagine was inspired by Julian Assange's popular whistleblowing website WikiLeaks. Of course, the two have nothing to do with each other, but we still find the name amusing. Formed in 2009, the company has grown to becoming quite a talking point in the Indian smartphone arena.

The Wickedleak Wammy Titan 5 is our review product of the day. This behemoth of a smartphone is large, heavy and undeniably phablet-esque. Does it have what it takes to justify the Rs. 13,990 price tag? We find out in our review. 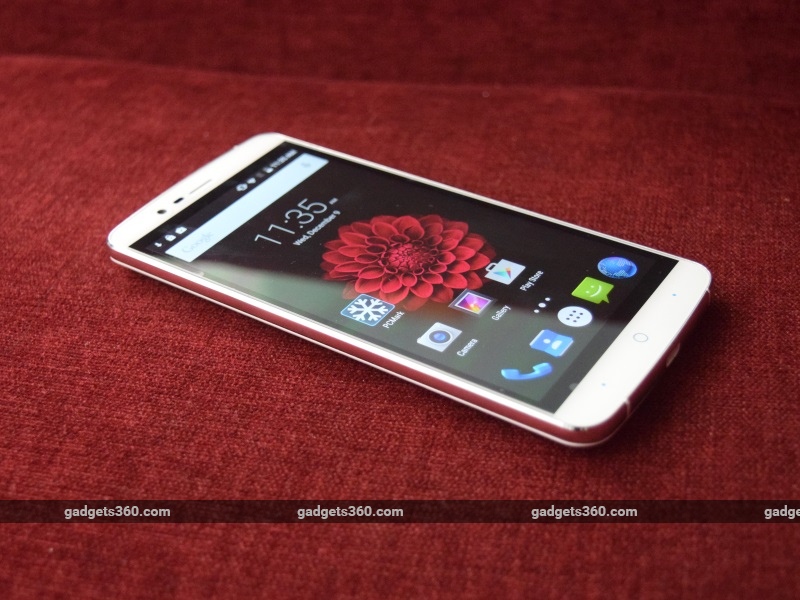 Look and feel
With its 5.5-inch screen, the Wammy Titan 5 can rightfully be classified as a phablet. It's also incredibly heavy and thick. Although the Wickedleak website specifies the thickness of the phone at 8mm, it feels thicker. The back has a removable textured plastic panel, while the frame and edges are metallic. After a closer look at the phone, we found the build quality and finishing a bit crude. From the USB port to the printed Wickedleak logo on the back, the Wammy Titan 5 has visible signs of poor finishing, along with minor scuffs and nicks on the back straight out of the box. 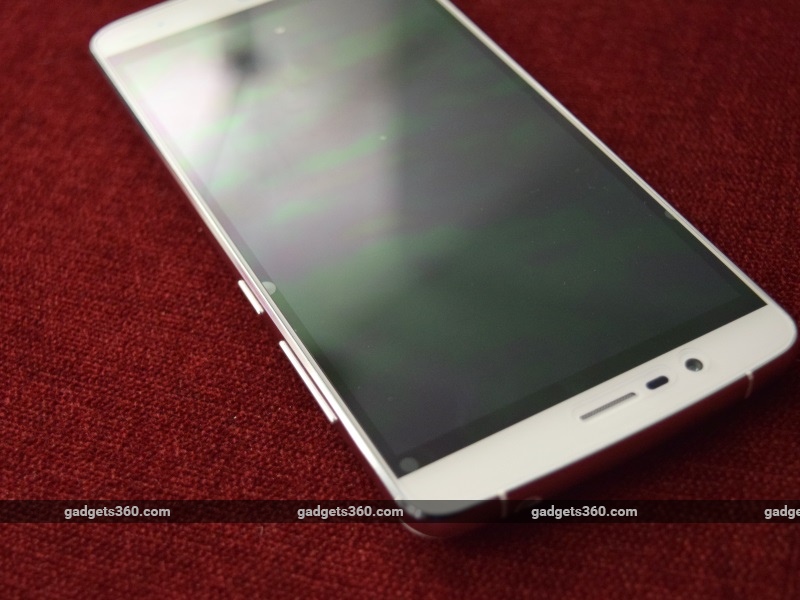 The Wammy Titan 5 comes with a pre-fitted screen protector film, but the application of the film was so poor that there were multiple air bubbles on the screen. It also hampered touch sensitivity to some extent, so we just removed it. There were slight issues with touch sensitivity even on the plain screen.

The front of the device has a high screen-to-body ratio, with thin edges and capacitive keys at the bottom. Only the centre capacitive key is backlit. The front camera and proximity sensor are located alongside the earpiece at the top. There is no dedicated notification light; the backlit Home key pulses to indicate that you have unseen notifications, which is a touch we rather like. 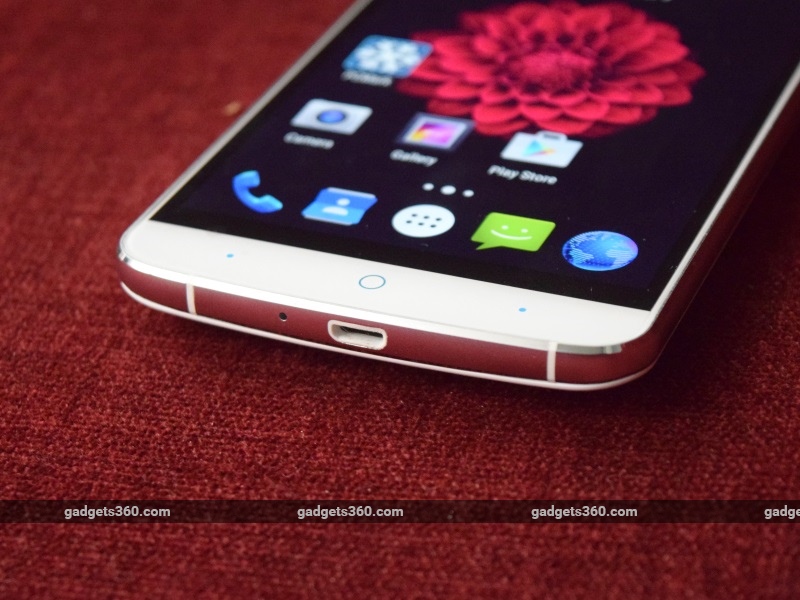 The screen of the phone is full-HD and suitably sharp and detailed. It was somewhat ineffective under direct sunlight, due to not being quite as bright as we would have liked. However, colour reproduction is good, and the resolution ensured that we couldn't see any individual pixels even up close. This is perhaps the only aspect of the look and feel that we're actually impressed with.

The back of the device has the camera and flash at the top, with the fingerprint sensor right below it. The speaker grille is at the bottom. The edge layout is standard, with the power and volume keys on the right, the USB port at the bottom, and the 3.5mm jack at the top. The SIM trays and microSD slot are under the back panel. Although the battery is visible under the back panel, it isn't actually removable. A service technician would likely be able to remove and replace the battery, but we don't recommend you try this yourself. 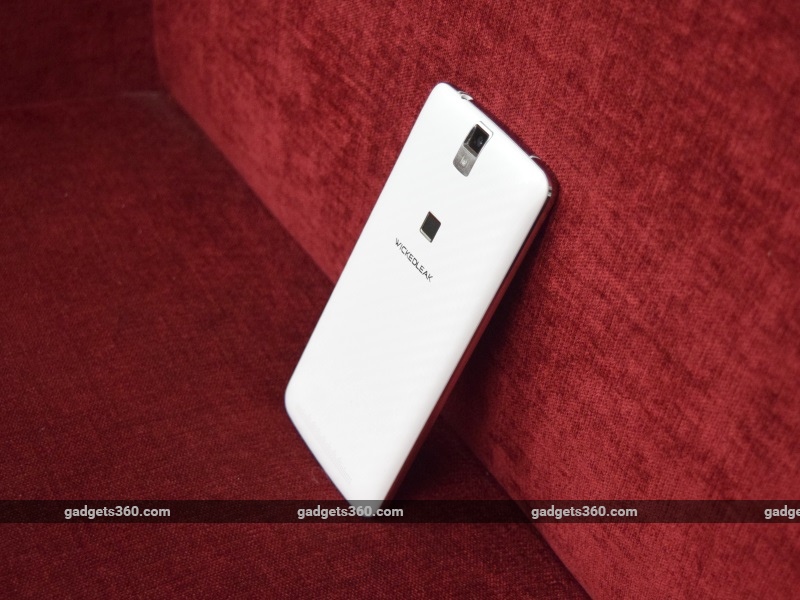 Specifications and software
The Wickedleak Wammy Titan 5 has a decent specifications list. The octa-core 1.3GHz MediaTek MT6753M SoC powers this phone, along with 3GB of RAM, 16GB of internal storage (expandable by up to 128GB), a 4165mAh battery, Android 5.1 out of the box, and dual-SIM connectivity. The phone is listed as 4G-compatible, but unfortunately, Indian bands are not supported so you won't be able to use 4G on current networks in India. There is no NFC or gyroscopic sensor.

The Titan 5 runs Android 5.1 out of the box, with a stock-Android-like skin on top. This makes the phone easy to use and suitably smooth and fluid and well. There is a bit of bloatware that cannot be uninstalled, but on the whole, the user interface has been kept clean and simple. Unfortunately, the settings menu is a bit threadbare, offering only basic functionality and customisation. Critically missing is the ability to display the battery level in the status bar, along with the ability to change the functionality of the capacitive keys. Usefully though, there is an option to set individual app permissions. 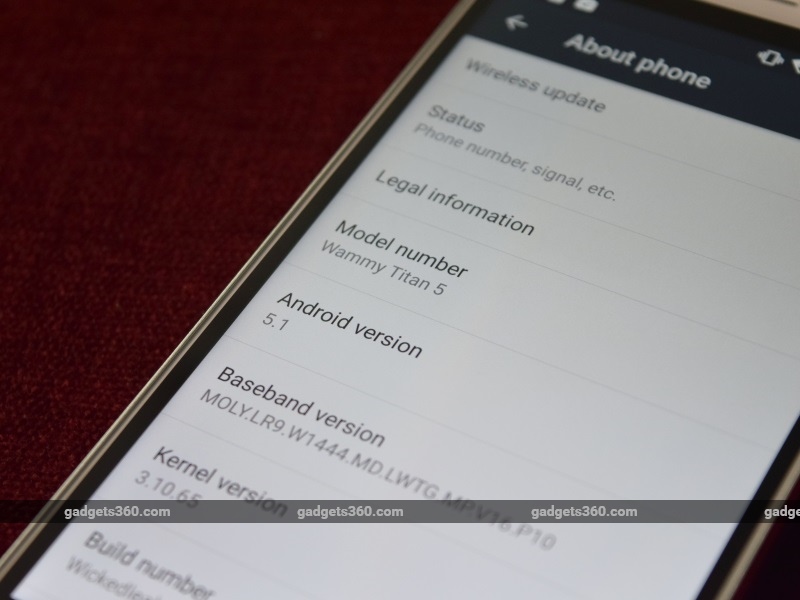 The phone includes a fingerprint sensor, which is uncommon at this price, but not unheard of. Upto five fingerprints can be stored on the device, and can be used to unlock the Wammy Titan 5. Unfortunately, the fingerprint sensor is much smaller than we're used to seeing on smartphones, and is poorly designed and not the most consistent in operation. 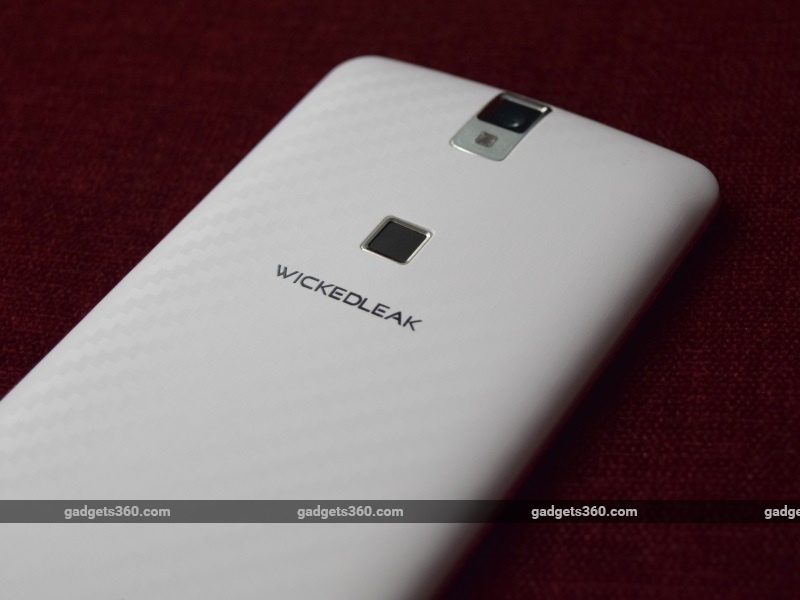 The camera app is well designed, with plenty of manual controls and picture modes. Filters can be applied through the gallery as well as through the camera app. There are also quick controls for the flash, camera switching and HDR, along with keys for shooting stills or video. There are, however, serious issues with focusing, which is slow and occasionally quite inaccurate. 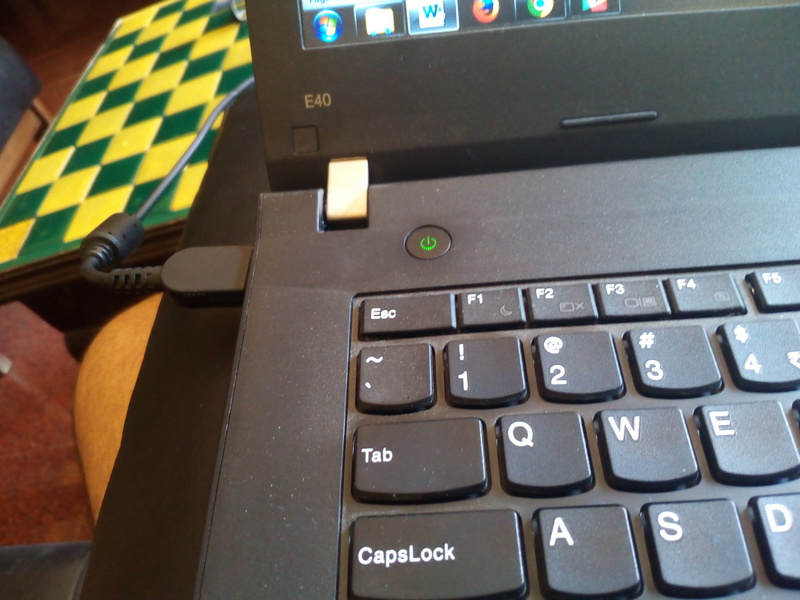 The camera itself is a complete disappointment. Despite the suitably large 13-megapixel sensor, picture quality is unacceptable for a smartphone at this price. There is a glaring lack of detail in every picture we took, along with washed out and inaccurate colours, and far too much noise. The pictures look bad even on the small screen of the device, and even worse when we examined them on a larger laptop screen.

The front camera suffers the same problems, and we cannot possibly recommend this device to anyone who needs even a half-decent camera. Outdoor shots were equally poor, as were low-light shots. The camera also suffers when there are bright and dark areas within the same frame. The dark areas are often completely blacked out, while the light areas are too bright and therefore appear washed out and out of focus. 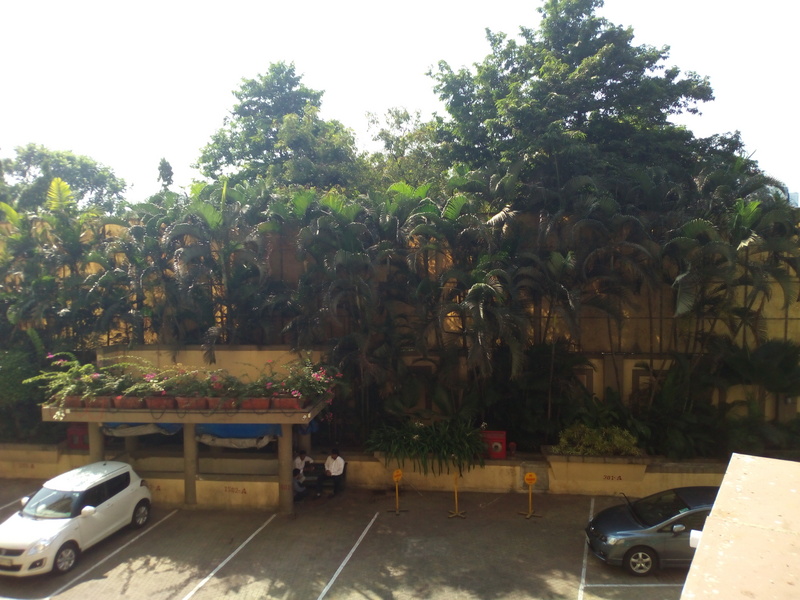 Performance
The Wickedleak Wammy Titan 5 is an acceptable performer. We did occasionally feel some lag and stutter with tasks, but performance with highly encoded videos and intensive games such as Dead Trigger 2 and Angry Birds 2 was decent. The most noticeable lag is when waking the Wammy Titan 5, which takes a fraction of a second to become functional after pressing the power button.

Benchmarking tests revealed some rather varied figures. While AnTuTu and Quadrant both returned respectable scores of 38,978 and 21,864 respectively, GFXBench and 3D Mark Ice Storm Extreme both performed poorly with scores of 12fps and 4406. While we didn't actually see any serious concerns in actual use, the numbers are a bit worrying from a long-term perspective. 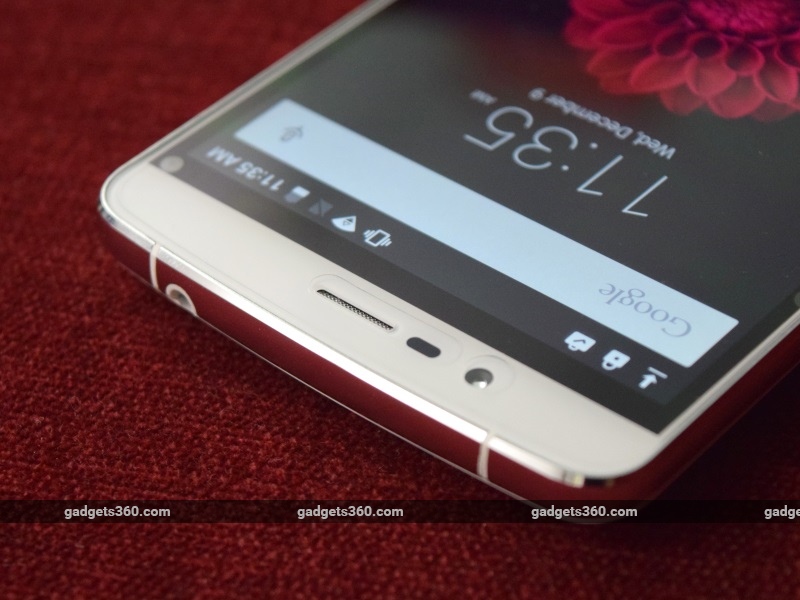 Finally, we tested basic functionality and the battery life of the device. There are occasional issues with holding on to network properly, but in good network areas we had no trouble with calling and Web browsing over 3G. Audio quality through the speaker is average at best, and improved slightly when we plugged in headphones.

The phone lasted only 9 hours, 50 minutes in our video loop test, which is rather low for a large 4165mAh battery. In day-to-day use, we managed a day of battery life. Considering that buyers are making a big trade-off in terms of aesthetics, size and weight of the phone for the large battery, this kind of performance is a letdown. 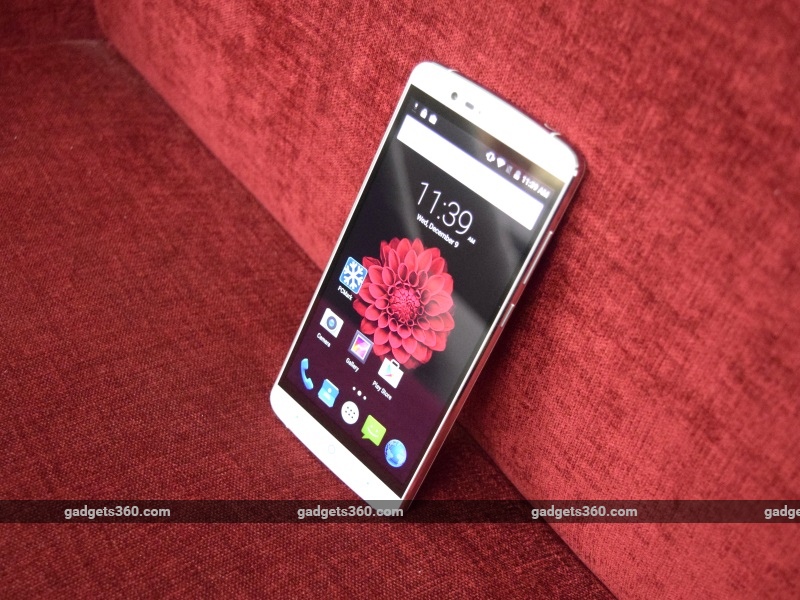 Verdict
The Wickedleak Wammy Titan 5 has a lot going for it on the face of it. You're getting a full-HD screen, fingerprint sensor, 13-megapixel camera, large 4165mAh battery and decent performance for just Rs. 13,990. However, when you consider that the fingerprint sensor is poor in its operation and the camera is utterly lacking in any quality whatsoever, this doesn't seem like quite as good a deal.

Furthermore, a lack of support for Indian 4G bands essentially makes this device limited to 3G connectivity except when travelling abroad, and the battery life certainly doesn't live up to expectations.The only advantages are the good screen and decent performance. After our time with the device, we felt that the Wammy Titan 5 has far too many shortcomings to seriously challenge the market. There are better devices available for less.