Vivo has been very aggressive with its strategy for the Indian market. The Chinese smartphone maker became the title sponsor of the Indian Premier League and later also launched an IPL edition of its V5 smartphone in India. All along, it has mainly been pushing its selfie-focused V series which has now expanded to include the Vivo V5 (Review), Vivo V5s (Review) and Vivo V5 Plus (Review). Now, the selfie craze seems to have trickled down to its budget Y series as well, and the Vivo Y66 is the latest smartphone to be positioned this way.

Vivo has been advertising the "moonlight camera" on the Y66 to no end. But is this phone a one-trick pony or is it geared to stand up to the likes of the Moto G5 Plus (Review) and the Xiaomi Redmi Note 4 (Review)? Let’s find out.

With the Vivo Y66, it is evident that the design is heavily inspired by Apple smartphones. Vivo has gone with plastic as the build material instead of metal. So while the phone looks good, it does not feel premium in hand. The front is dominated by the 5.5-inch IPS display with 2.5D curved glass on top. There is no mention of any sort of protection for the display, but Vivo pre-applies a plastic protector on it. Above the display sits the 16-megapixel camera along with the metal earpiece, proximity sensors, and selfie flash. Vivo has used a filter over this flash which makes it look quite big. Below the screen are the standard capacitive Android buttons that aren’t backlit.

Vivo has positioned the power and volume buttons on the right of the phone, and their positioning makes them easy to press. The left of the phone only has the hybrid dual-SIM tray. It has one slot for a Micro-SIM and another for a Nano-SIM or a microSD card. There's a chrome trim running along the sides of the phone sandwiched between the top glass and the back panel. At the bottom, there's a Micro-USB port, a speaker grille, a 3.5mm audio socket, and a microphone. 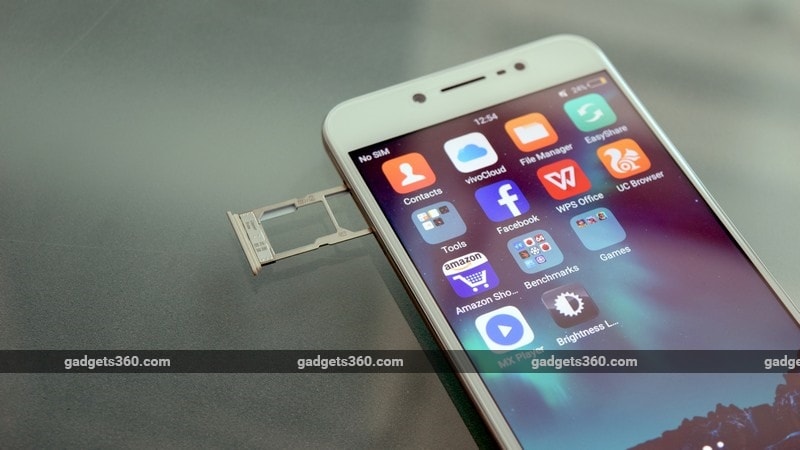 This Vivo Y66 has a 13-megapixel rear camera along with a single LED flash in one corner. You'll see Vivo branding right in the centre, and antenna lines running across the top and bottom. The phone misses out on a fingerprint scanner, which is a surprising omission considering that this is now almost an industry-standard feature at most price points.

Vivo offers a clear case in the box, which we would recommend using to keep the plastic back scratch-free. With the Y66, you also get a basic headset with mic, a SIM ejector tool, a charger rated at 5V 1A, and a USB cable.

The Vivo Y66 is powered by an octa-core MediaTek MT6570 processor with integrated Mali-T860 graphics. The processor is clocked at 1.5GHz and the phone has 3GB of RAM. There's 32GB of storage and support for microSD cards of up to 256GB for storage expansion. The screen has a resolution of 720x1280 pixels, which is lower in comparison to what many competitors currently offer. The quality of the screen is good but we couldn’t find any way to tweak settings like the warmth of the display. It has good viewing angles but we observed a slight shift in colour, which could be because of the preinstalled plastic screen protector. The single bottom-mounted speaker is loud enough to enjoy videos and games on the phone.

In terms of connectivity, the Vivo Y66 gets Bluetooth 4.0 along with dual-band Wi-Fi, but lacks NFC. It supports USB-OTG and you can plug in a pen drive using an OTG adapter. The phone has a non-removable 3000mAh battery, and you get a simple charger in the box. 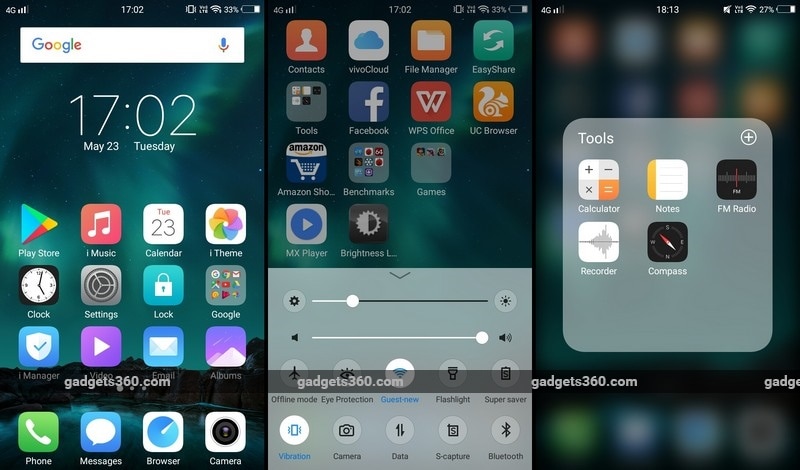 Vivo ships the Y66 with Android 6.0 Marshmallow running its Funtouch UI on top. The interface is clearly inspired by iOS right down to the icons used. Unsurprisingly there is no app drawer and this is a single layer UI. Apps you install show up right on the homescreen. For the quick settings, you need to swipe up from the bottom of the screen instead of going to the notification area. Vivo also chooses to call it Control Center. Even the Settings menus have an iOS feel to them. If you have been an Android user for a while you’ll need some time to adapt to this UI.

The default app for music is called i Music, the app to change themes is called I Theme, and the phone management app is called i Manager. Vivo has also an app for cloud storage called vivoCloud, which lets you back up everything on the phone. Apart for these apps, you get UC Browser, Facebook, Amazon, WPS Office, and pretty much the entire suite of Google apps. Vivo has added gesture shortcuts to the Y66 which are useful. You can double-tap to the display to wake it, or trace alphabets to launch specific apps. There's also has a Motorola-inspired shortcut to light up the screen when you wave a hand over it. Overall, the Vivo Y66 has very few bits that are original, making it seem as though most of it is inspired by other smartphone makers. 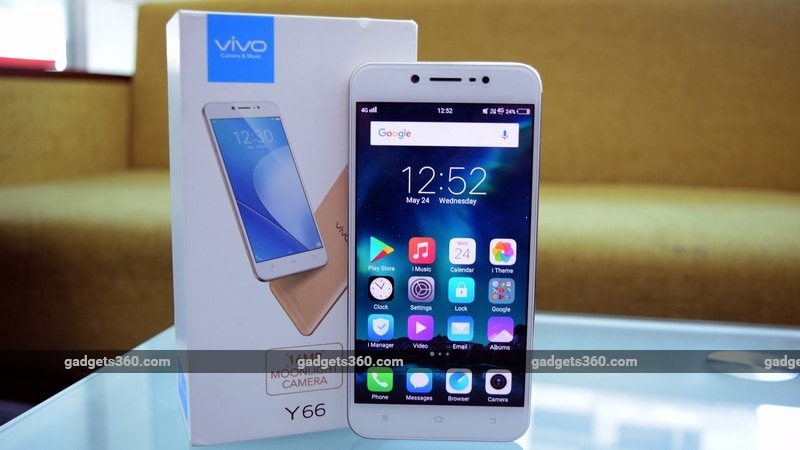 Vivo has been aggressively pushing the Y66 for its 16-megapixel selfie camera and flash. The camera app offers a beautify mode which smoothens skin, and there are different levels to choose from. The output from the front camera lacks detail but is good enough for sharing on social media. The filter over the flash diffuses light when it is triggered, which means that you don't get blinded.

At the back, the Vivo Y66 has a 13-megapixel camera with a single-LED flash, and using the camera is pretty straightforward. It is quick to focus in daylight but a lot of our test photos came out overexposed. The camera app has a manual mode to let you control different parameters on your own, and we lowered the exposure level for better shots. In low light, the camera takes a little longer to focus and needs a steady hand when the shutter button is tapped. Photos had lots of noise and lacked detail, but were acceptable. There's a night mode in the camera app that improved the output marginally. 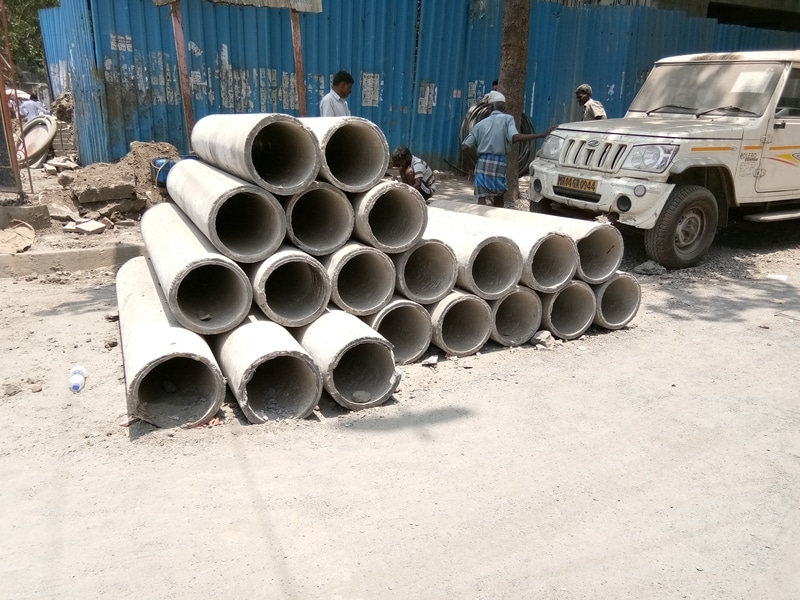 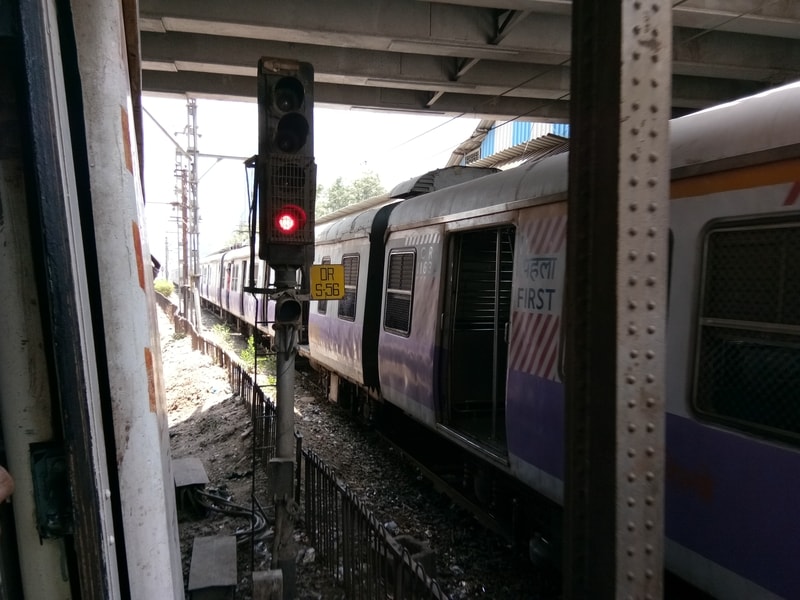 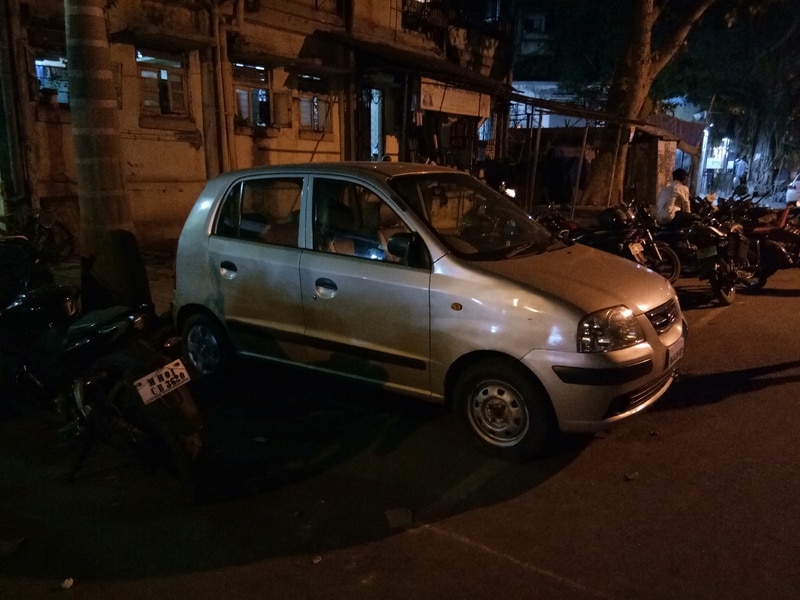 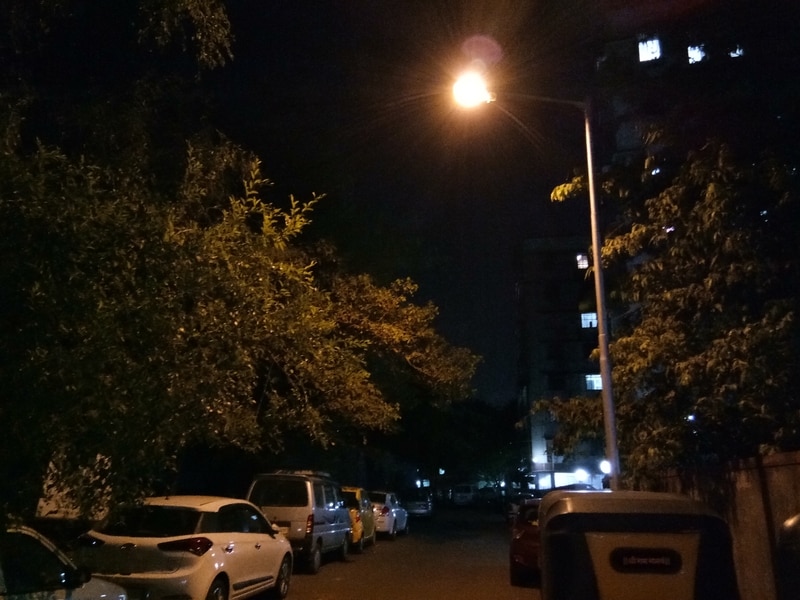 We did not experience any lag or stutters with the Vivo Y66 during our review period. It ran apps well and we always had over 1GB of RAM free. RAM management is quite aggressive and the phone didn’t let any resource-hungry apps run in the background for a long time. We put the Vivo Y66 through our benchmark tests and it returned 41,177 in Antutu, as well as 605 and 2,530 in Geekbench's single core and multicore tests respectively. We installed Clash Royale, Warhammer 40K, and Breakneck, and the phone managed to handle all of them, though we saw occasional frame drops in Breakneck. The phone did get warm after a long gaming session, but not so much that it became uncomfortable.

Battery life is good, and the Y66 managed to soldier on for 11 hours and 23 minutes in our HD video loop test. The phone lasted us one day with light to medium use, which is good because the provided 5W charger does take a long time to charge the battery.

Priced at Rs 14,990, the Vivo Y66 feels out of place in the current market. For starters the build quality isn’t premium - most smartphone manufacturers currently offer metal bodies at this price level. The display resolution is also lower than what the competition ships, and the biggest blow to the Y66 in our opinion is the omission of a fingerprint sensor. Considering that significantly less expensive phones now sport fingerprint scanners, the Y66 definitely seems overpriced.

The software and design aren't terrible, but don't do anything to make the Y66 more attractive. This phone goes up against the likes of the Moto G5 Plus (Review) and the Xiaomi Redmi Note 4 (Review), and you are better off with either of them at this price.