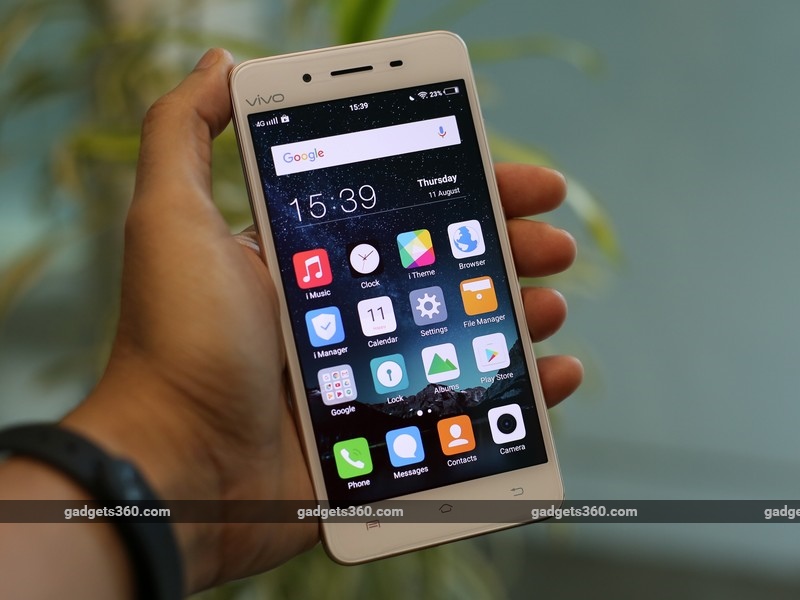 Vivo is among the Chinese companies that believe in traditional marketing channels to get their names out there, which is a stark contrast to, say, Xiaomi's approach. You've undoubtedly seen Vivo's neon-lit signs across the country, and even entire trains have been plastered with ads about its latest phones.

Recent models include the V3 and V3Max (Review), which were launched sometime in April. Since then, the V3 has gotten a price cut which brings it down to the sub-Rs. 15,000 segment, which is good. However, competition has become stiffer too. Does the V3 have enough merit to stay relevant despite the drop in price? Let's find out.

Design and build
The Vivo V3 looks identical to its larger sibling, which isn't really saying much since the V3Max has quite an uninspiring design. Without the Vivo branding on the front, one could easily mistake this phone for the Oppo F1. The V3 has non-backlit capacitive navigation buttons and curved glass edges. Although there's no mention of scratch protection, Vivo has confirmed that the V3 has Gorilla Glass. The phone also ships with a screen guard pre-installed. 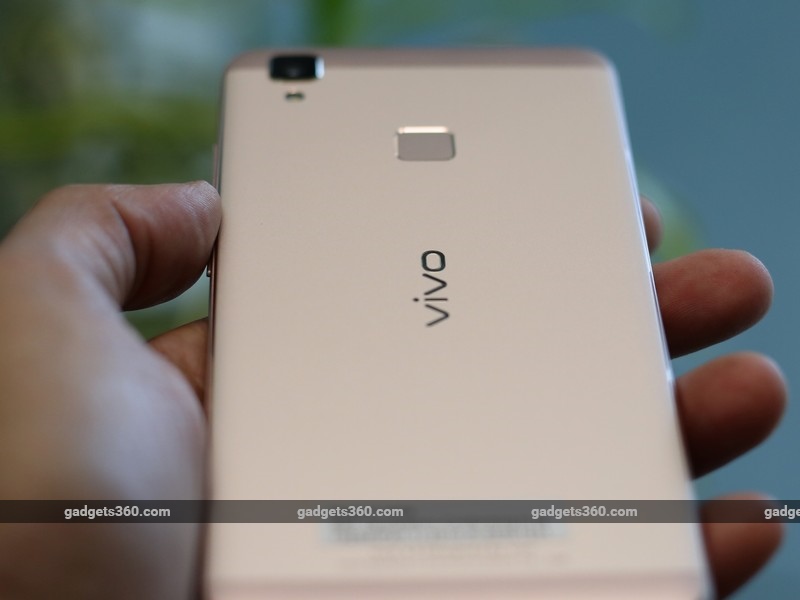 We love the 5-inch form factor, which makes holding and using this phone with one hand a lot more comfortable. The IPS display has good colour reproduction and viewing angles, but the resolution is just HD (720x1280). Text and icons have very slight jagged edges, but you really have to go looking for this and most won't notice any problem. Still, a full-HD resolution has become the norm at this price point so it would have been nice to have a sharper display.

The metal frame of the V3 is sturdy, and button placement is ergonomic. There's a dual-SIM tray on the left, and a dedicated microSD card slot (up to 128GB) on the top, next to the headphones socket. The V3 boasts of a powerful speaker with a dedicated amplifier chip, which works pretty well. Music tracks and dialog from videos are loud and distinct, and sound is still decently audible even outdoors. The effect would have been even better with stereo speakers, but this is still good. 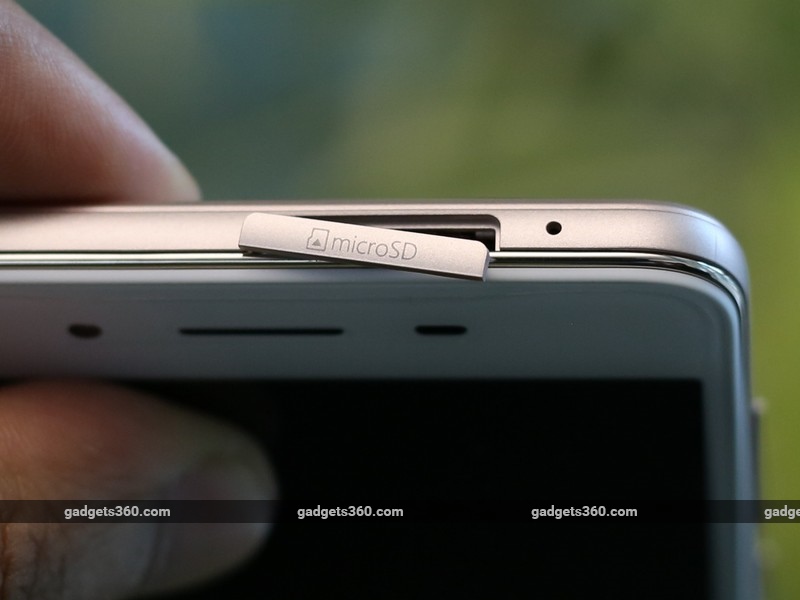 The texture of the phone's back doesn't offer much grip so it is quite slippery. Thankfully, you get a silicon case with it. Also in the box are a headset, a charger, a data cable, a SIM ejector tool, and a 4G Airtel SIM with which you can upgrade an existing Airtel connection to 4G. The power adapter is unnecessarily large, especially as the phone doesn't support fast charging.

Specifications and features
The Vivo V3 is powered by the tried and tested Qualcomm Snapdragon 616 octa-core SoC, along with 3GB of RAM and 32GB of storage. There's nothing to get excited about here as once again, we're used to seeing similar specifications in phones that cost much less. There's also dual-band Wi-Fi b/g/n, Bluetooth 4.0, GPS, FM radio, USB OTG and 4G LTE on Band 1, 3, 5 and 40. 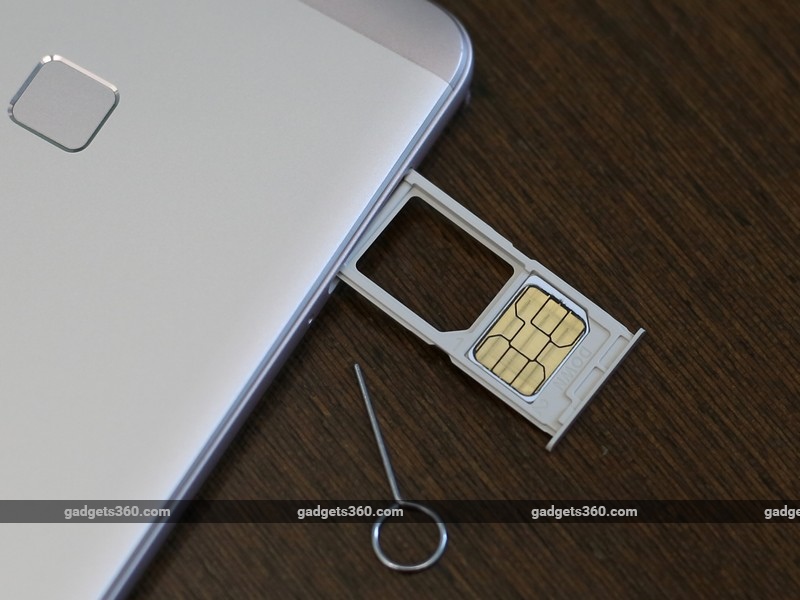 The fingerprint sensor is placed on the back and works very well, all the time. You can use it to trigger the camera shutter, and also lock your private files and apps. The V3 runs on Funtouch OS 2.5, which is a custom fork of Android Lollipop. It's a bit disappointing that we don't have a Marshmallow update yet.

Just like Oppo's ColourOS 3.0, the interface on the V3 looks and functions very much like Apple's iOS. However, if you're coming from a phone with stock Android, it will take some getting used to. The Recent apps button functions as a Menu button, and tapping it on the homescreen shows you options for widgets, transition effects, and the ability to hide apps that you don't want showing up on the single-layered homescreens. A long press or a swipe up from the bottom brings up the app switcher and toggles for Wi-Fi, Bluetooth, etc. 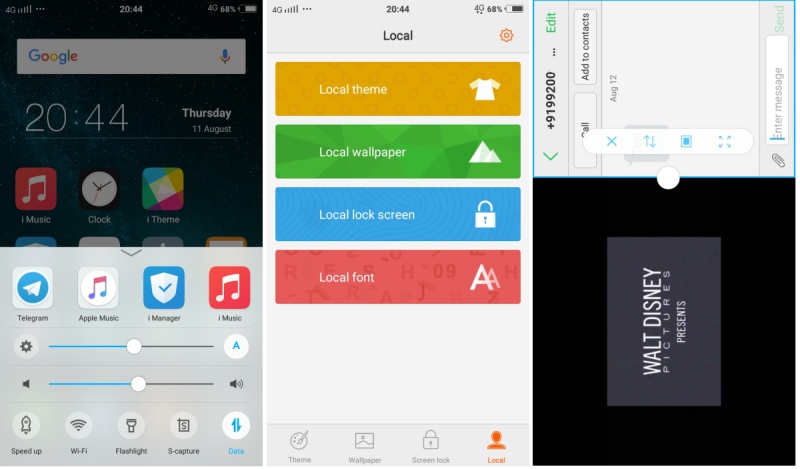 Vivo's apps includes i Theme for visual customisations; i Manager which lets you monitor data usage and manage apps and their permissions; EasyShare which lets you transfer files over Wi-Fi Direct; and Vivo Cloud for backing up your bookmarks, messages, contacts and notes. The phone also comes with WhatsApp, WeChat, Facebook, and WPS Office pre-installed. 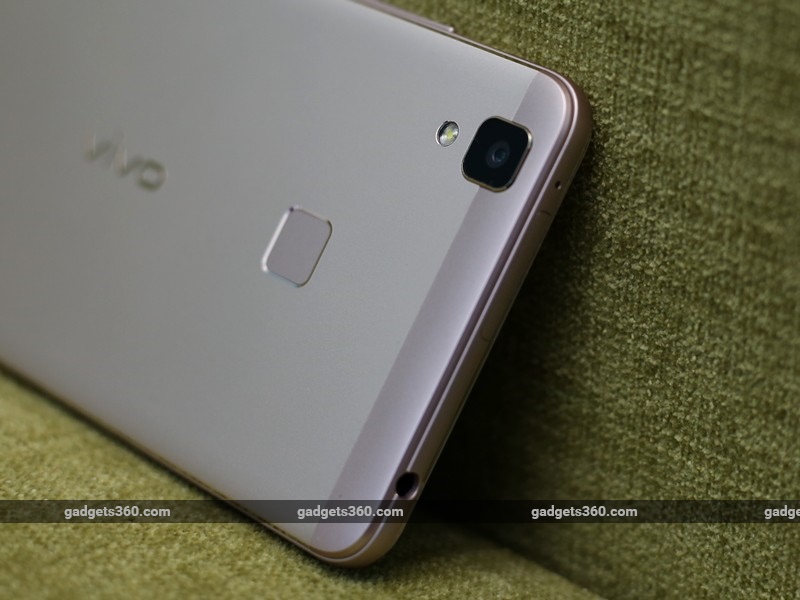 The Settings app gets a host of new controls like gestures, including something called Air operation, which wakes the screen when you hover your palm over it. Smart Multi-Screen gives you a floating notification of an incoming alert and upon opening it, opens the message across one half of the screen. This only works if you're watching a video through the stock player, Google Play Movies or YouTube in full-screen mode. S-capture lets you take a scrolling screenshot or record video screengrabs.

Performance
The interface, albeit a bit confusing at first, works smoothly. Multi-tasking is snappy and the phone easily handles heavy apps and games without any noticeable problems. We got an AnTuTu score of 40,359 and 23fps in GFXbench's T-Rex test. 4G works well on both SIM slots, and the earpiece offers good sound for calls. The Vivo V3 is also incredibly comfortable to hold and carry around due to the its relatively small size. We didn't have any trouble with overheating here even during gaming, when the phone only got a little warm.

The V3 isn't capable of 4K video playback, but 1080p video is not a problem. Even our high-bitrate files played just fine. The music player supports FLAC and audio quality is pretty good through the speaker. The bundled headset isn't great but things are better with a good pair of aftermarket earphones.

The 13-megapixel rear camera comes with Phase Detection Autofocus (PDAF) which helps quickly locking on to subjects. Pictures captured during the day look good when viewed on the phone's display, however zooming in reveals mild grain peppered across images. The same issue is prevalent in macros too, and the subjects in focus often lack sharpness. It's best to shoot in HDR mode at all times as standard pictures tends to appear slightly dull. The front 8-megapixel camera is strictly okay for selfies. 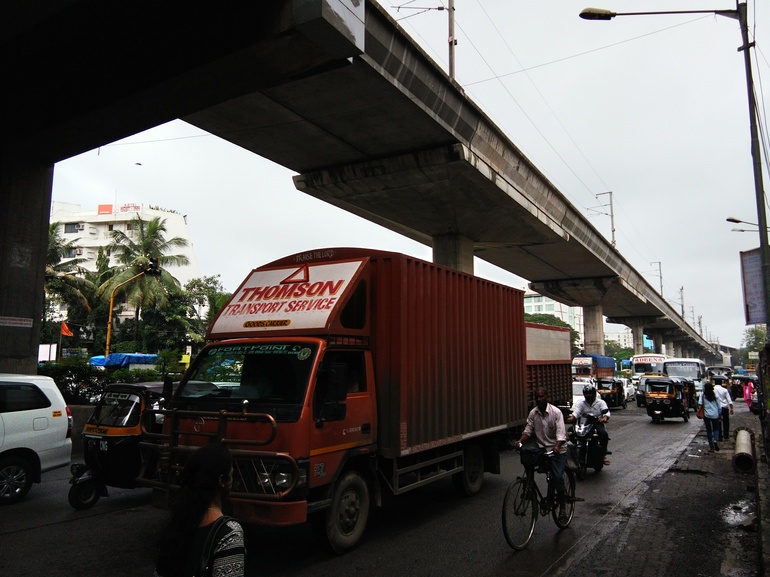 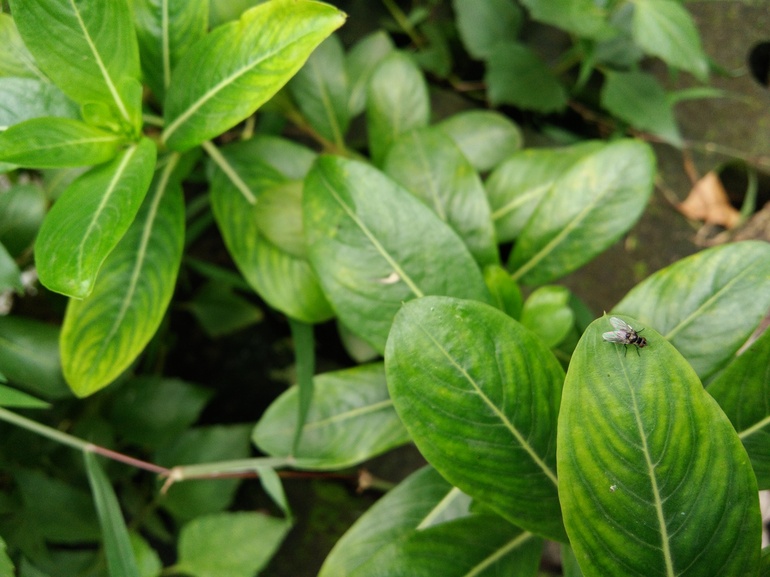 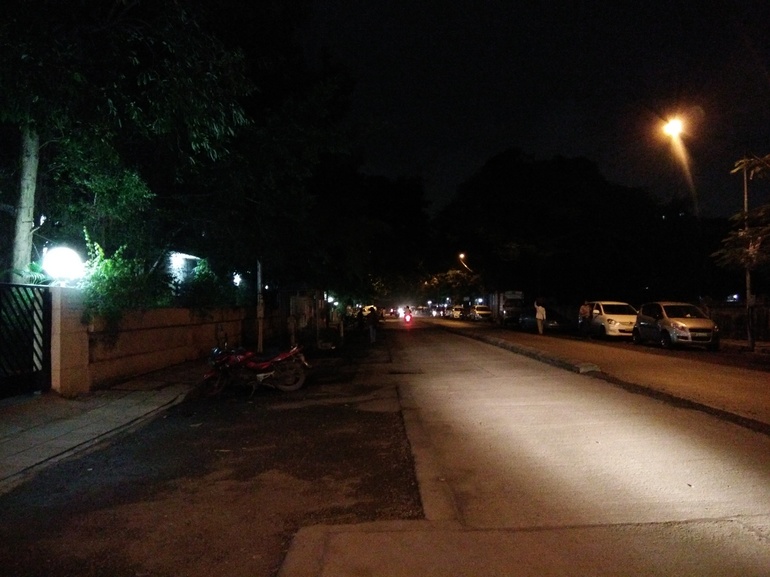 Video recording resolution tops out at 1080p but the quality is just about average. Low-light video and stills are very weak, with lots of noise ruining them. The camera app is well designed and there's provision for filters, watermarking, and touch- or voice-triggered capture. Shooting modes for the rear camera include HDR, panorama, night, professional, slow-motion video and hyperlapse video, all of which work pretty well.

The 2550mAh battery doesn't seem all that large, but thanks to the low screen resolution and efficient SoC, we managed to get a good 11 hours and 31 minutes of continuous video playback. Under regular use, we were able to go well beyond a day on a single charge. The phone doesn't support fast charging, yet it doesn't take too long to fully charge due to the small capacity. 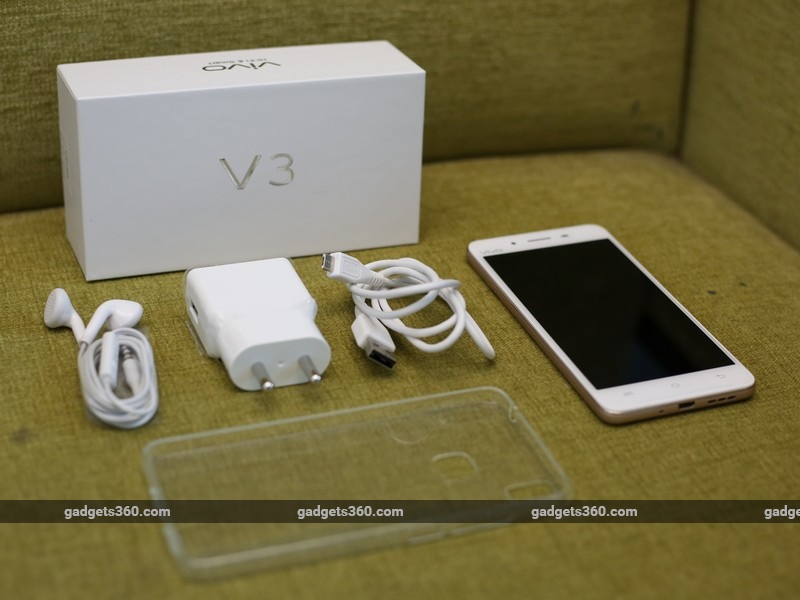 Verdict
The Vivo V3 is a decent product but the problem here is that it's easily overshadowed by the competition. Devices like the Moto G4 Plus (Review), Redmi Note 3 (Review), and LeEco Le 2 (Review) simply offer better value and far exceed the V3 in terms of display quality, camera, and CPU performance. The V3 thus feels a bit outdated already and isn't all that attractive despite its revised price of Rs. 14,980. We're also not big fans of Vivo's custom Android fork, which feels too cluttered and confusing.

However, the phone does well in terms of battery life and it does have a very manageable size, unlike many other options in this segment. Audio performance is also quite commendable, both for the speaker and headphones.

No Man's Sky: Gather-Build-Repeat in First Three Hours
Zoho Notebook Is a Note-Taking App Worth Checking Out