Is the new Vivo V11 Pro more than just a selfie phone?

Vivo launched the Vivo V9 (Review) earlier this year, and about six months later, we now have a new offering called the V11 Pro. The highlights of the Vivo V11 Pro phone, besides its 25-megapixel selfie camera, are the nearly bezel-free display and the in-display fingerprint sensor. Priced in the same ballpark as previous V series phones, has Vivo finally made a good all-rounder, or is it still just about the selfie camera?

The V11 Pro feels well-built despite its all-plastic body, but it’s quite slippery and attracts smudges very easily. We really liked its slim profile and lightness, but it’s fairly big - nearly the size of the Samsung Galaxy S9+ (Review). Thanks to the bezel-less design, Vivo has fitted a pretty big 6.4-inch AMOLED panel in this frame. The resolution is good, and colours are punchy and nicely saturated. There’s also one of the smallest notches we’ve seen so far, similar to the one on the Oppo F9 Pro.

The Vivo V11 Pro gets a new gradient colour scheme called ‘Starry Night’, which adds to its aesthetic value. We’re a bit disappointed to see a Micro-USB port instead of a USB Type-C port, which is increasingly being used these days. The in-display fingerprint sensor is a cool trick, but it wasn’t very quick at authentication in our initial experience, just like our experience with the Vivo X21 (Review). Face recognition is a lot quicker, so we simply wound up using this most of the time.

The V11 Pro runs on Funtouch OS, which is based on Android 8.1 Oreo. It’s far cry from stock Android, due to which there is a bit of a learning curve. However, it’s disappointing to see the same issues and quirks that we’ve pointed out before, continue to persist. The Settings app still lacks a search function, and when playing games in landscape mode, the sharp corners of the left side don’t match the rounded corners of the right, which looks awkward.

In the short time we’ve been able to use this phone, we haven’t noticed any major heating or performance issues. The phone does get a little warm with extensive camera use, but not so much when gaming. We did notice that PUBG defaulted to the ‘Medium’ graphics setting, despite the decently powerful Snapdragon 660 SoC and 6GB of RAM. We’ll be doing some more testing with a variety of games to see how the phone holds up.

We were able to spend a little time with the camera, which has AI scene recognition. The autofocus system is similar to what we saw with the Vivo X21. It’s really quick at locking focus in stills as well as videos. Image quality seems pretty decent, especially for selfies, but we’ll have to test this phone further to settle on a final verdict. 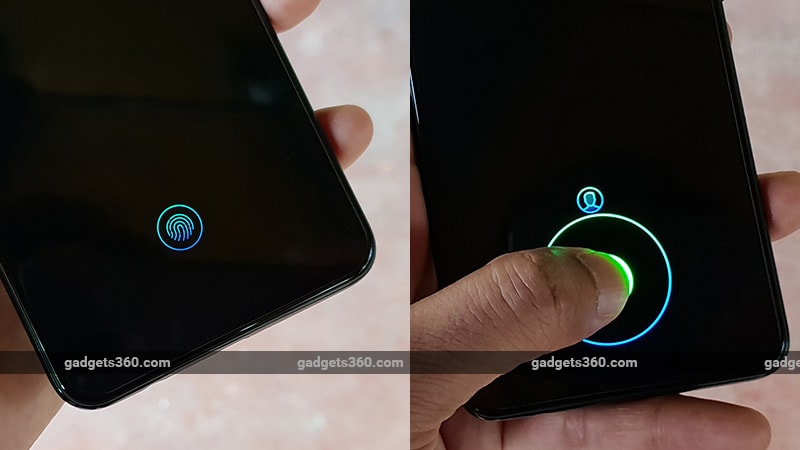 The Vivo V11 Pro doesn’t feel like a drastic upgrade over the V9, which is understandable considering that the V9 launched merely six months ago. We appreciate the upgraded SoC and subtle design changes including the smaller notch, the new colour and the in-display fingerprint sensor. We’re yet to see what the cameras are truly capable of, and the larger battery should offer better standby time compared to the Vivo V9. As for the competition, the V11 Pro has phones such as the Poco F1 (Review) and Oppo F9 Pro to contend with, which should make things interesting for buyers.

We’ll be bringing you the full review of the V11 Pro soon, so stay tuned. Till then, we’re curious to know what you think of it. Does the V11 Pro have a chance against its rivals? Let us know via the comments.

Further reading: Vivo, Android
Roydon Cerejo Email Roydon
Roydon Cerejo writes about smartphones and laptops for Gadgets 360, out of Mumbai. He is the Deputy Editor (Reviews) at Gadgets 360. He has frequently written about the smartphone and PC industry and also has an interest in photography. With over a decade of experience covering the consumer technology space, he is also an avid sci-fi movie and TV show geek and is always up for good horror flick. Roydon is available at roydon@gadgets360.com, so please send in your leads and tips. More
Google Maps for iOS Gets New Events Section, Elevation Chart for Cyclers
Honor 8X Max With Waterdrop Notch, 7.12-Inch Display Launched, Honor 8X Goes Official Too