Smartphones in the sub-Rs. 10,000 segment have gotten much better in the past few years, and buyers now have a lot of options to choose from. We have seen powerful processors including the Qualcomm Snapdragon 660 and the MediaTek Helio P60 powering smartphones at this price point. Phones with display notches are also very common in this price range now. Tecno's Camon i4 is among a few smartphones at this price point to offer three rear cameras. Does the triple-camera setup help it stand out from some strong competitors, or does it fall short of offering a good experience? We put it to the test to find out.

The Camon i4 has a big 6.2-inch display with a 19.5:9 aspect ratio and thin bezels, though the bottom chin is a little too big for our liking. There's a waterdrop-style notch that Tecno refers to as a Dot Notch, but it is similar to what we have seen on many recently launched smartphones.

The earpiece is pushed towards the frame of the smartphone to extract the maximum possible area for the display. The frame of this phone is made out of plastic and is rounded, which makes it easy to hold. All the buttons are positioned on the right and are easy to reach. 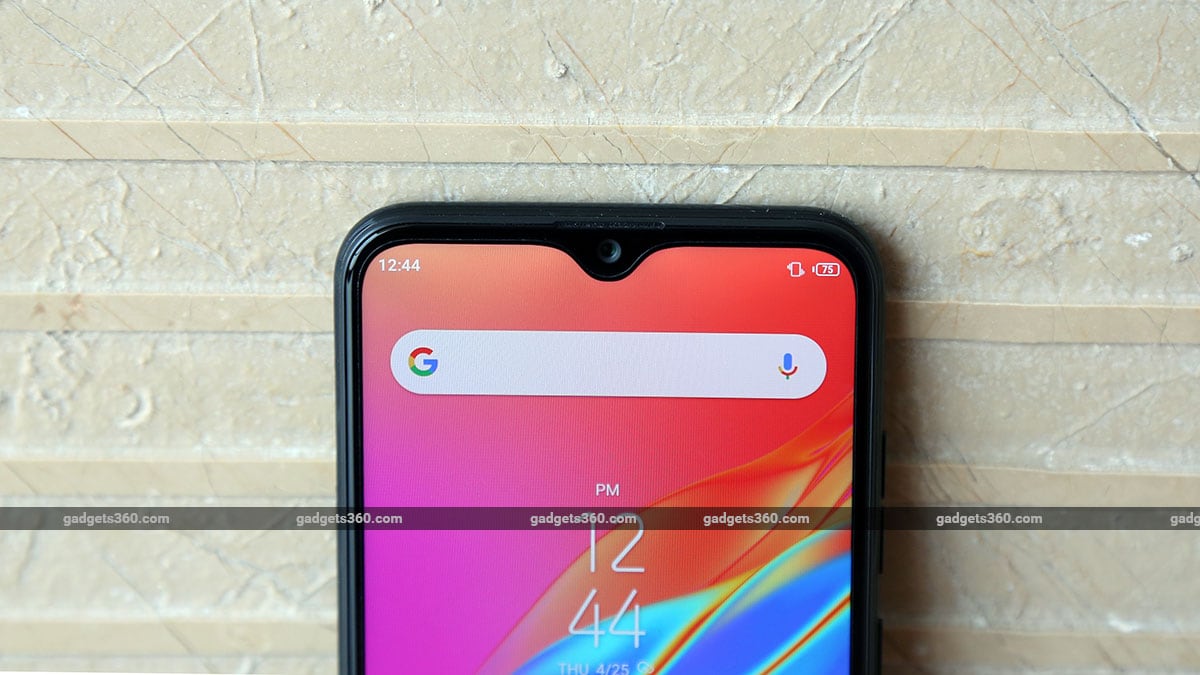 All the ports are at the bottom of the Tecno Camon i4 while the top is bare. There is a Micro-USB port at along with a 3.5mm headphone jack, the primary microphone, and a speaker grille. We have seen manufacturers including HMD Global, Xiaomi, and Asus shipping their smartphones with USB Type-C ports at this price point, so this is a little disappointing. The SIM tray is to the left.

At the back, the Camon i4 has a triple camera setup which isn't very common on phones around the Rs. 10,000 mark. Right below the camera module is the LED flash. The Tecno and Camon logos are positioned horizontally in line with the cameras, similar to what we're used to seeing on Honor smartphones.

Tecno ships a transparent case in the box along with a 10W charger. The company offers a one-time screen replacement warranty if damage occurs within 6 months of purchase, a 100-day free replacement guarantee, and extended warranty.

Tecno Camon i4 specifications and software

The Tecno Camon i4 sports a 6.2-inch HD+ (720x1520 pixels) display with a 19.5:9 aspect ratio. It has a screen-to-body ratio of 88.6 percent and a peak screen brightness of 500 nits, which makes it legible when outdoors. While many smartphones have different RAM and storage variants, the processor also changes with the Tecno Camon i4 depending on the variant you choose, which is highly unusual.

Our review unit is the base model with 2GB of RAM and 32GB of internal storage, with the Helio A22 SoC which is a quad-core processor with four Cortex-A53 cores clocked at 2GHz. We have seen the same processor powering the Redmi 6A (Review), which costs considerably less at Rs. 5,999. This means that our review scores and findings apply only to the variant we have tested, since the experience will be significantly different with the others. 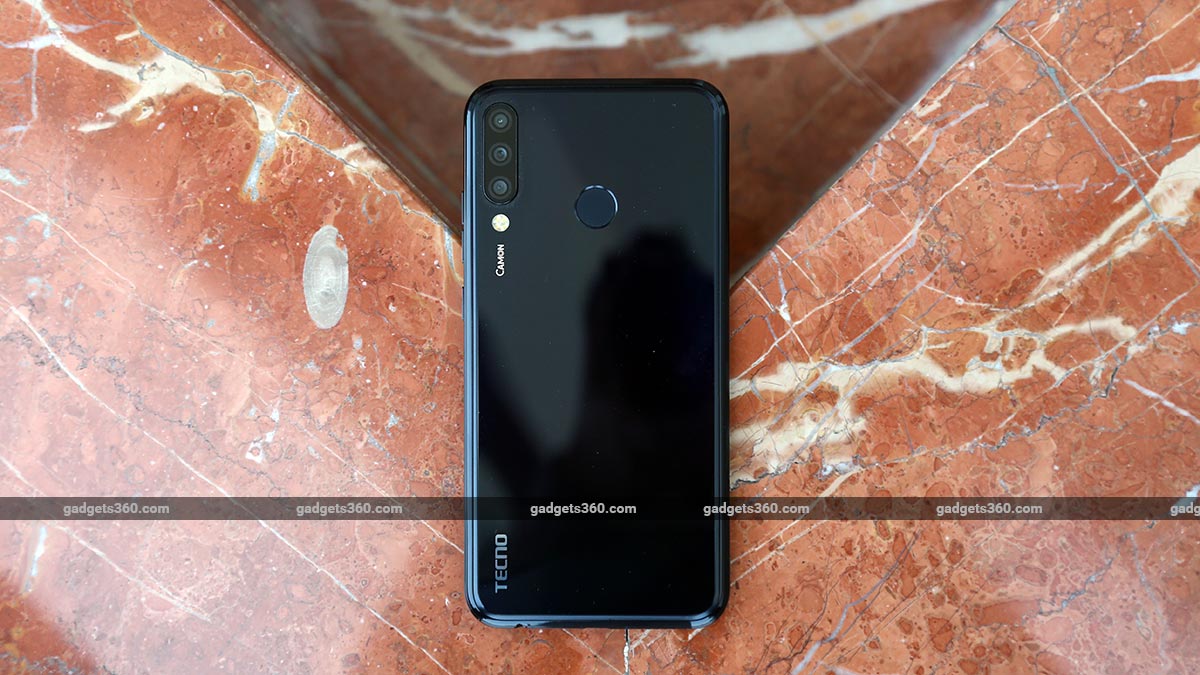 The Camon i4 has a triple camera setup at the back

The Tecno Camon i4 is a dual-SIM smartphone and has two Nano-SIM slots. Storage is expandable thanks to the dedicated microSD card slot, and you can use cards of up to 256GB capacity. There is support for 4G as well as VoLTE on both SIMs.

Connectivity options include Bluetooth 5, Wi-Fi 802.11 b/g/n, GPS/A-GPS, and FM radio. This phone has an accelerometer, an ambient light sensor, and a proximity sensor. There's a 3500mAh battery and support for the company's own ‘Rocket' fast charging using the supplied 10W charger.

Tecno ships the Camon i4 with HiOS v4.6 running on top of Android 9 Pie. There are quite a few customisations such as gesture navigation, which replaces the traditional Android navigation buttons with swipe points. There's also a Mix Navigation option which is similar to the swipable button seen on the Google Pixel 3 (Review) series. While the waterdrop notch isn't intrusive, the UI does give you the ability to hide it completely.

A few gesture shortcuts can be enabled from a submenu called Micro Intelligence in the Settings app. The usual raise-to-wake gesture and the ability to launch apps by tracing alphabets on the screen when the phone is in standby are available. It also has a double-click-to-broadcast feature which broadcasts the time and the weather when you double tap the display. There is a flip-to-mute gesture along with music gestures that let you control music by swiping on the display.

The Camon i4 also has a WhatsApp mode in that restricts background data access to WhatsApp alone, and only lets other apps use it when they are active. This is useful if you need to be frugal with the way you use your data but still need to receive messages. 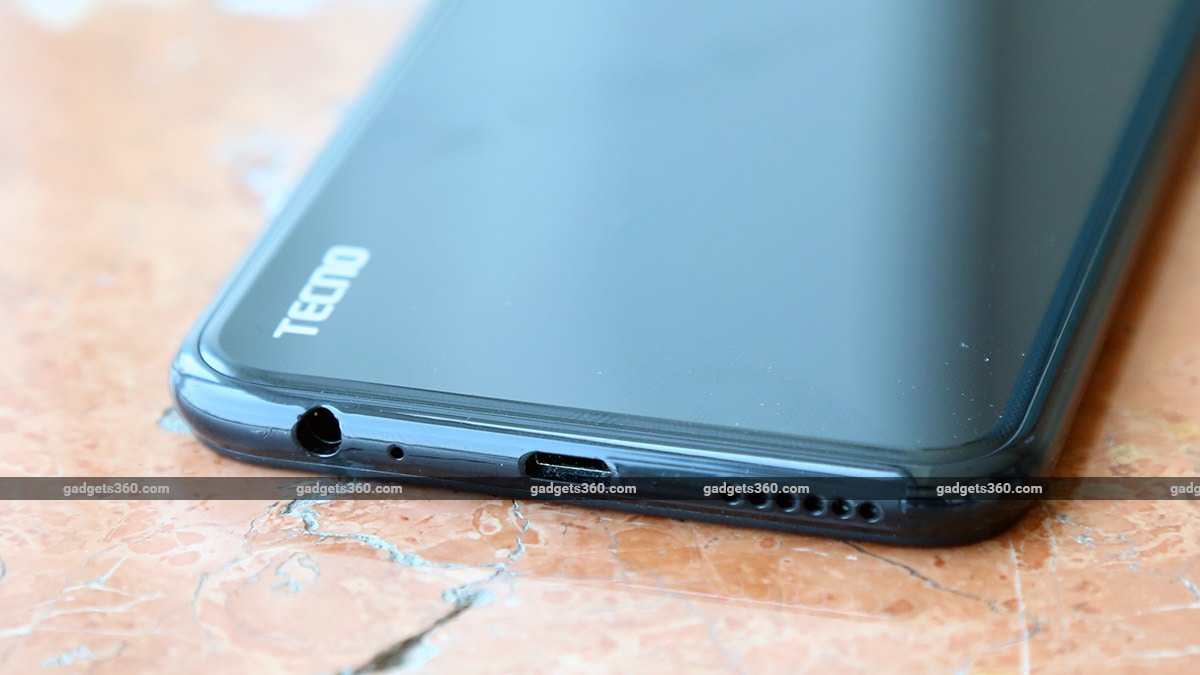 Camon i4 has a microUSB port and a 3.5mm headphone jack

There is support for some UI customisation, and you can download new themes and wallpapers using the Hi Theme app. The Camon i4 uses Hi Launcher which has an app drawer. Swiping right from the homescreen will take you to a search screen that also shows a list of recently used apps and a news feed.

Tecno preinstalls quite a few apps on the Camon i4. You have the usual suite of Google apps, plus Facebook, Facebook Messenger, Instagram, Opera News, and Danger Dash. There's an app called Carlcare for service support, and a video app called Visha. Ignite lets you edit photos and create collages, and PHX Browser is an unnecessary extra that sends out at least one notification per day. Phone Master lets you delete junk files and clear RAM, which is claimed to help boost the phone's performance.

We weren't really impressed with the specifications that Tecno offers for the price this phone commands. The Camon i4 has enough performance for basic tasks such as using WhatsApp and multitasking with a couple of apps, but bump the load up and you will see that this phone struggles to keep up.

The 2GB of RAM is a bottleneck, and we found that there was only around 1GB of RAM free after using the Phone Master app. Face recognition is available but isn't exactly fast, and the capacitive fingerprint scanner at the back unlocks the phone considerably quicker.

In AnTuTu, the Camon i4 scored 61,174 which is similar to what the less expensive Redmi 6A managed. In the PCMark Work 2.0 benchmark, it scored 4660 points, but refused to run the Geekbench benchmark. It managed 20fps in GFXBench T-Rex and 8.2 fps in Manhattan 3.1. In 3DMark Slingshot and Ice Storm Extreme, it scored 443 and 5,638 points respectively. 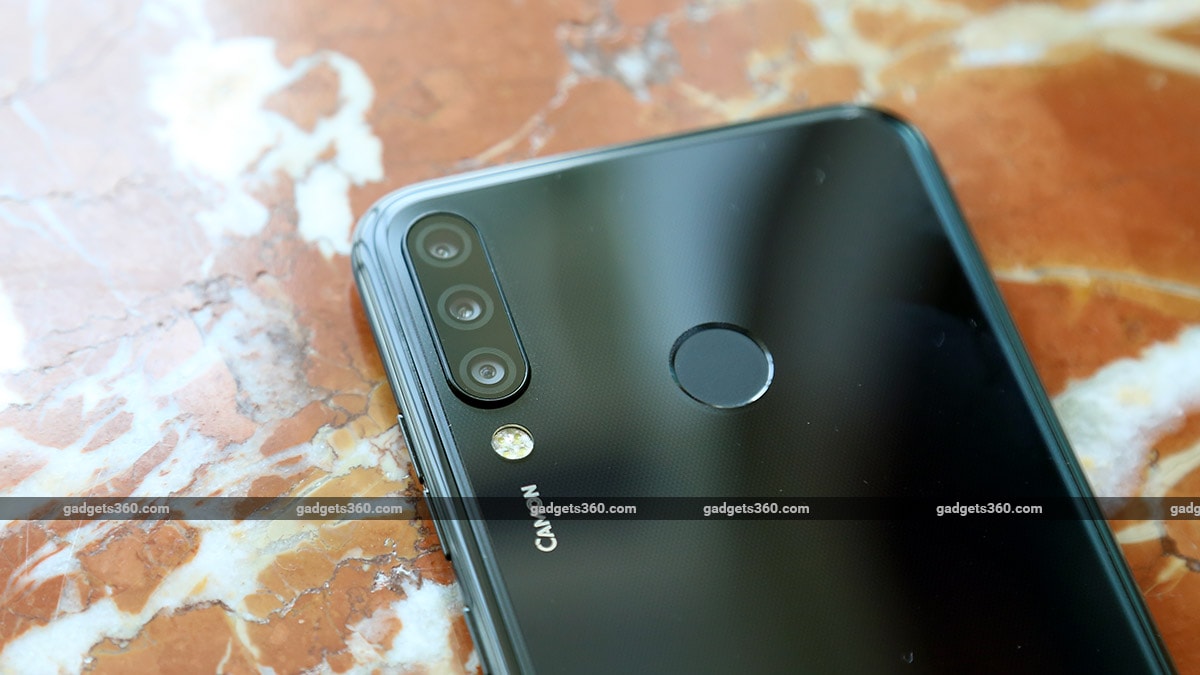 The triple-camera module houses a 13-megapixel primary sensor and an 8-megapixel wide-angle sensor.

We played PUBG Mobile on the Tecno Camon i4 to gauge its gaming performance. It defaulted to the low preset with the graphics set to smooth and frame rate set to medium. Gameplay wasn't smooth though, and we did notice lag while playing. We did try lowering the frame rate but it didn't make enough of an improvement. Similarly priced smartphones such as the Asus ZenFone Max Pro M2 (Review) and the Xiaomi Redmi Note 7 (Review) have more powerful processors that can run games much better.

We weren't happy with the AI Cam mode on the Camon i4. It kept detecting ‘sport' every time the phone moved even a little. We rarely saw it identify anything else because of this issue. While the AI on the Camon i4 needs to be fixed, it captured some good photos in daylight. Our sample shots had good detail but the phone failed to get the exposure right in a few cases.

When shooting against the light, we did notice purple fringing. Macros were surprisingly good and the phone managed good separation between subjects and backgrounds. It was easy to switch to the wide-angle camera to capture a wider field of view, but this camera lacks autofocus and should only be used for landscapes. 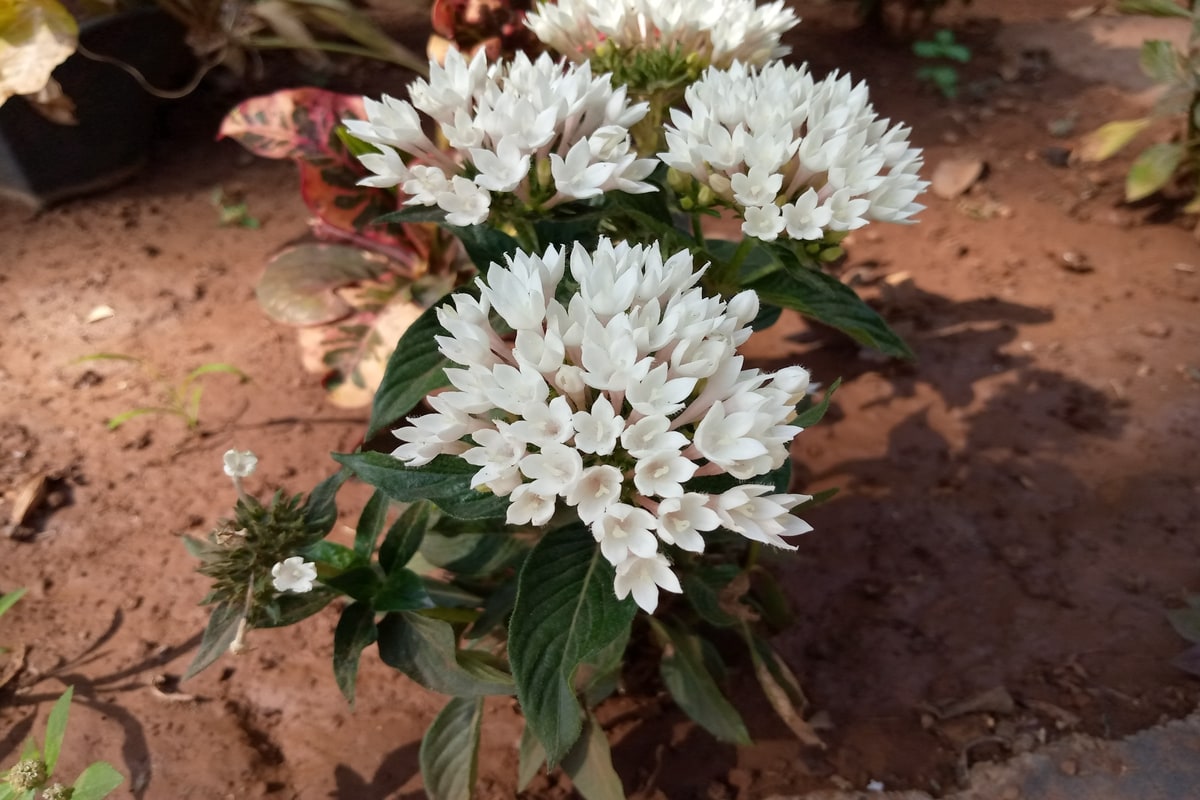 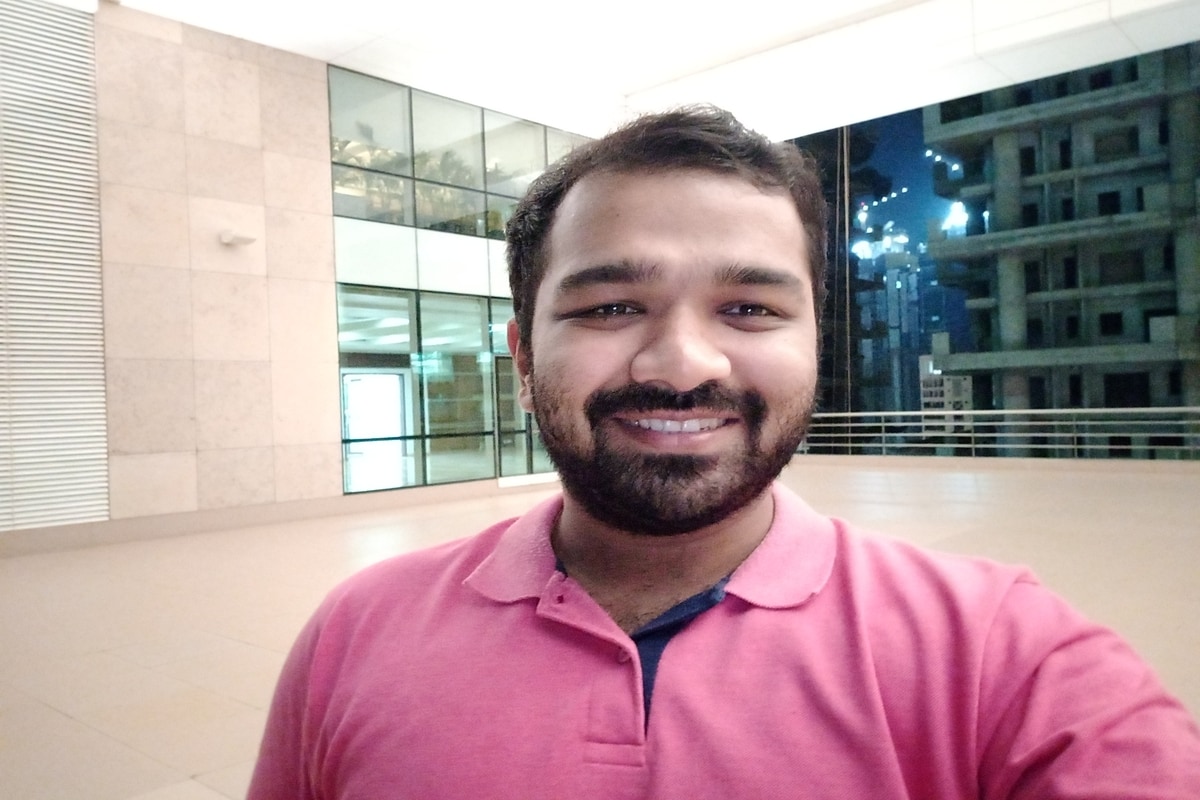 In low light, the camera often failed to lock focus automatically and needed us to tap the screen to focus. We found the output to have a lot of graininess, and overall the quality was below average. Low-light macros were decent but you will need a steady hand. Edge detection was also average when using the bokeh mode.

Selfies are decent enough to go on social media but lack detail when you zoom in. Video recording maxes out at 1080p for the rear and the selfie cameras. There is no image stabilisation, which means that footage is shaky.

Battery life is good, and we managed to go beyond a day with our usage, which included having an active WhatsApp account, using Google Maps for close to two hours for navigation, and playing PUBG Mobile for 15 minute.

If you want to extract more battery life out of this phone, there are battery saver modes. When we did run out of power, the supplied 10W charger took less than two hours to charge this phone completely.

Verdict
The Tecno Camon i4 is priced in a segment where the competition is very fierce. Phones at this budget level have more powerful processors and more RAM than what the Camon i4 delivers. While this phone loses out in terms of performance, the primary rear camera does take decent photos in daylight, and the wide-angle sensor could come in handy for shooting landscapes.

The Camon i4 recently got a price cut but even at Rs. 8,999, you can find better value elsewhere.

Further reading: Tecno, Tecno Ramon i4
Aditya Shenoy Email Aditya
Aditya Shenoy reviews smartphones, wearables, headphones and speakers for Gadgets 360, out of Mumbai. Aditya is a reviewer for Gadgets 360 and has written extensively about smartphones, software updates, and upcoming devices. Aditya is available on Twitter at @adishenoy, and you can mail him at adityashenoy@ndtv.com, so please send in your leads and tips. More
SK Hynix Confident of Memory Chip Recovery After Quarterly Profit Drop
Oppo Reno 10x Zoom Edition, Reno 5G Price and Global Release Details Announced